Behind a Valero gas station just outside Norton, Virginia, an access road winds up a mountain to an old strip mine site. The road ascends to a flat area, devoid of the region’s usual thicket of trees and understory, open to the air and sun. The ground is dusty in patches, with flecks of coal still visible. But mostly, it’s pockmarked with shrubs and grasses along the steep inclines that divide levels that appear to have been flattened by bulldozers.

A line of cars and vans carrying 200 high school students scale up the road on a Friday afternoon in late April, kicking up dust that’s mixed with coal, dirt and pebbles. The road isn’t long—the mine site is only set back a little from the main highway, and the view from the top of the mountain encompasses the entire town and ridges that encircle it. 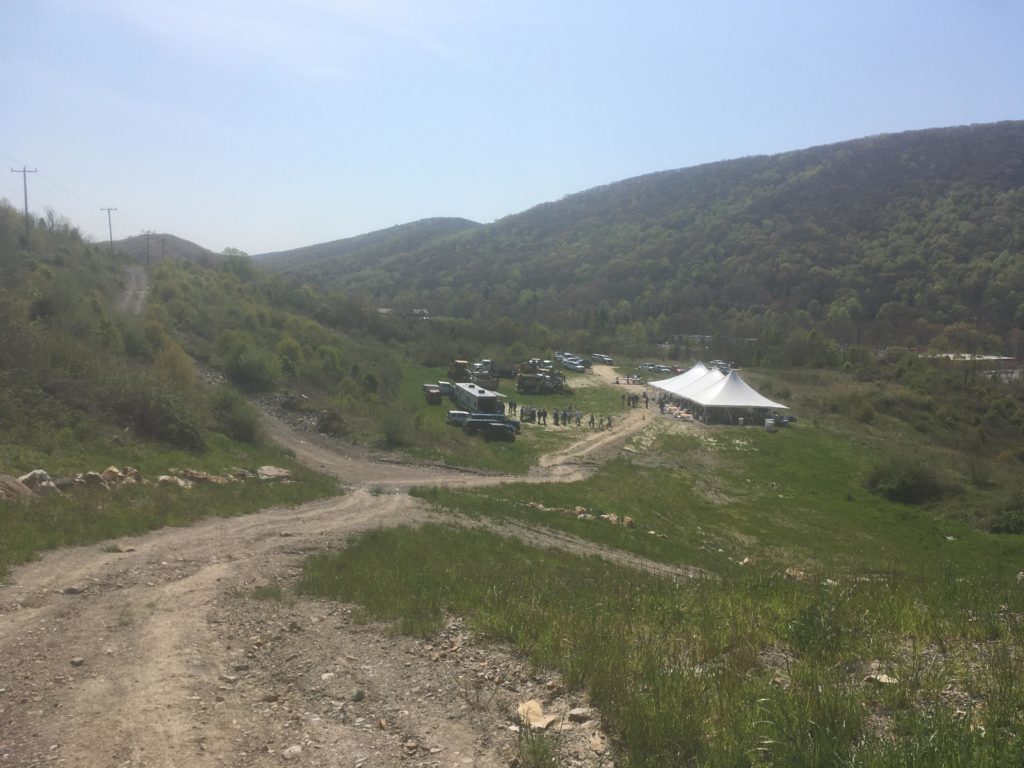 The Project Intersection area above Norton was once a 200-acre strip mine.

The high schoolers emerge from vehicles and are greeted at a table by representatives of Virginia Energy, the federal Office of Surface Mining Reclamation and Enforcement, the City of Norton, and others. On this warm, sunny spring morning, the large and enthusiastic group is celebrating Arbor Day.

On a rugged and steep hill, the high schoolers stand scattered in small groups, each equipped with a bag of what look like long sticks and a sharp orange planting tool called a dibble. The sticks are trees—diversified hardwoods, pines, and a few fruit trees, like persimmons and crabapples. One group struggles to use the dibble as an adult looks on.

“Right here?” says the student, driving the dibble into the ground.

“Yes,” says the adult supervisor, an employee with the Office of Surface Mining.

“Use all your might on it,” is the response. “Put your weight on it and push down.”

The student briefly hops on the dibble like a pogo stick, and it cuts a small hole into the ground. Another girl takes a tree, and places it in the hole, gathering dirt around it. And the tree is planted.

The long abandoned strip mine was reforested before, in the old style—compacted soil, invasive grasses, scrubby pine trees with limited root systems. Now the land has a new chance to regrow its forest.

But all over Appalachia, millions of acres of mine lands sit dormant.

The initiative outside of Norton is called Project Intersection and strives to combine reclamation efforts  with economic development. The planting project extends over three acres of land, though the strip mine site is close to 200 acres, encompassing an old high wall, a mining feature that can deteriorate and crumble.

According to Virginia Energy, since the state’s Arbor Day celebration began in 2005 over 10,000 trees have been planted on nearly 40 acres of the land.

The mine, once owned by Landmark Coal, was active between 1967 and 1977. Operations ceased before the Surface Mining Reclamation and Enforcement Act, which mandated that coal companies post bonds prior to mining to ensure responsible cleanup of their operations. Abandoned mine lands are eligible for federal funding, with one simple catch—to make up for the loss of coal jobs, most abandoned mine lands grants need to include some promise of jobs or other economic benefits to the area. 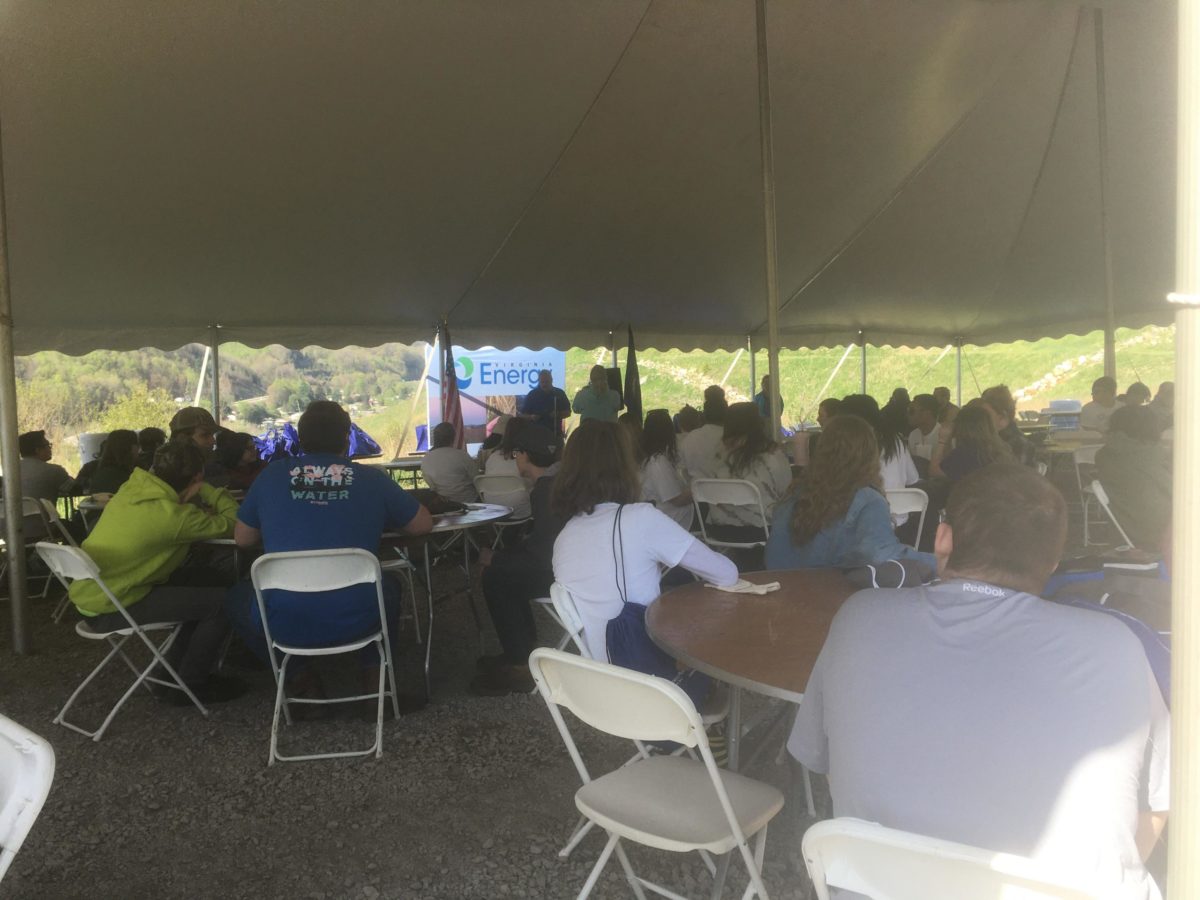 200 high schoolers gathered to plant on the Project Intersection site

Project Intersection isn’t going to return the ridge to the dense mountain forests—at least not soon. Instead, the plans are for a business park, funded by an alphabet soup of federal and local public funding sources: the Virginia Office of Surface Mine Reclamation, the Abandoned Mine Lands Economic Revitalization program, the Appalachian Regional Commission, and the City of Norton. So far, Project Intersection has netted $9.2 million.

Craig Seaver is the coordinator for the Lonesome Pine Regional Industrial Facilities Authority, a local economic development agency.  He says he’s excited about the site’s potential.

“This site, that once provided jobs…will once again provide jobs for our region’s citizens,” Seaver said..

Those jobs are with Earthlink, a telecommunications company that plans to build a call center on the site. At the planting, Earthlink representatives said the project will provide 285 local jobs, at $15-$20 per hour. The planting isn’t just reforestation, it’s beautification for the building’s grounds.

The high schoolers aren’t getting paid for the time they spent on the Arbor Day planting, but all the adults seem  to have ideas about what the students could do with the experience they’re getting.

While the Earthlink representatives hope they show interest in call center jobs, forester Clifford Drouet is interested in drawing them to his line of work.

“Coal’s kind of fadin’ out. Forestry needs to be stepping up,” Drouet says.

Drouet works with the Appalachian Regional Reforestation Initiative, or ARRI, a coalition of governmental, industry and citizen groups. Drouet draws up long-term forestry plans for mine sites and supports coalfield states as they work to stabilize and restore the ecology of their mine lands. 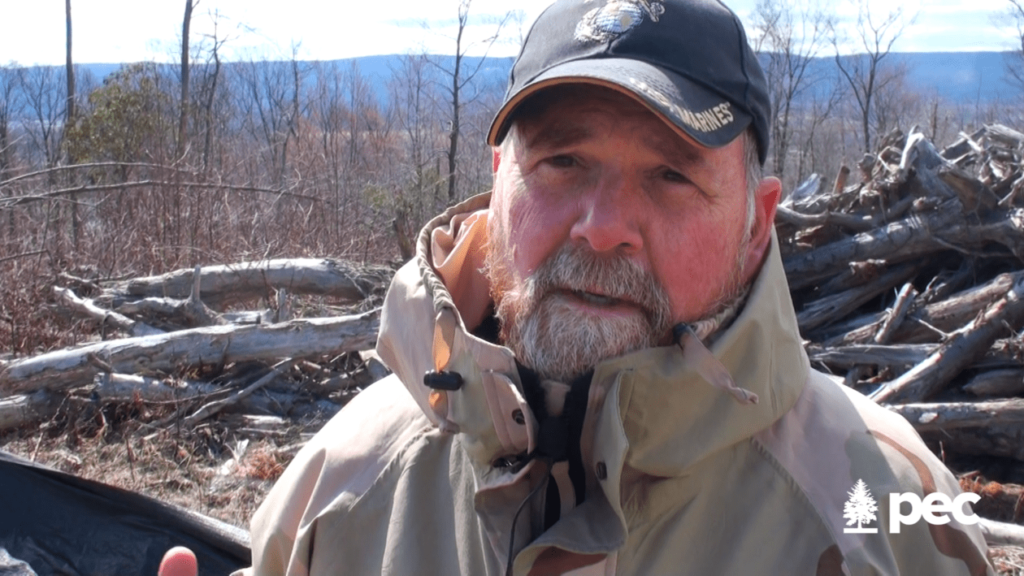 Clifford Drouet is a forester with the Appalachian Regional Reforestation Initiative.

Drouet says he believes good forestry and economic development can go hand in hand. Mine lands that have already been used, he said, can and should be repurposed for buildings and road projects that could use the space. But more than that, Drouet really hopes to show that good environmental stewardship can be an economic driver in itself. These jobs don’t have to be seasonal—they can be longer term.

Forestry doesn’t mean planting trees and walking away, Drouet said. It means years and years of hard work and maintenance.

Abandoned mine lands are supposed to be properly reclaimed—stabilized and reforested to preserve water quality and prevent erosion. But hundreds of thousands of acres of old strip mines remain unreclaimed, and many mines that shuttered before 1977 were reclaimed in an antiquated style that doesn’t reflect today’s best practices.

Dr. Wally Smith, a biologist at the University of Virginia at Wise, has worked on and observed several mine land reforestation projects. He says the work is complex, encompassing several eras of mining and mine restoration, something like restoring an old house that’s been renovated a few times.

“They’re all different ages, meaning that they were all restored under different guidelines, and different strategies,” Smith said.

As mine land reforestation techniques have progressed, more environmentalists have begun to approach reclamation as a problem requiring long-term planning and investment. Smith says even when former mine lands are planted with the right tree mix, invasive species can damage the work. Sites can also take a while to develop the structural integrity of a fully-forested mountain, threatening waterways with soil runoff and causing headaches for economic development projects. In one notable case, the Knott County Sportsplex, built on top of a slowly settling “soil fill” in Leburn, Kentucky, is physically falling apart.

“That’s something that you always have to be vigilant about,” Smith said. 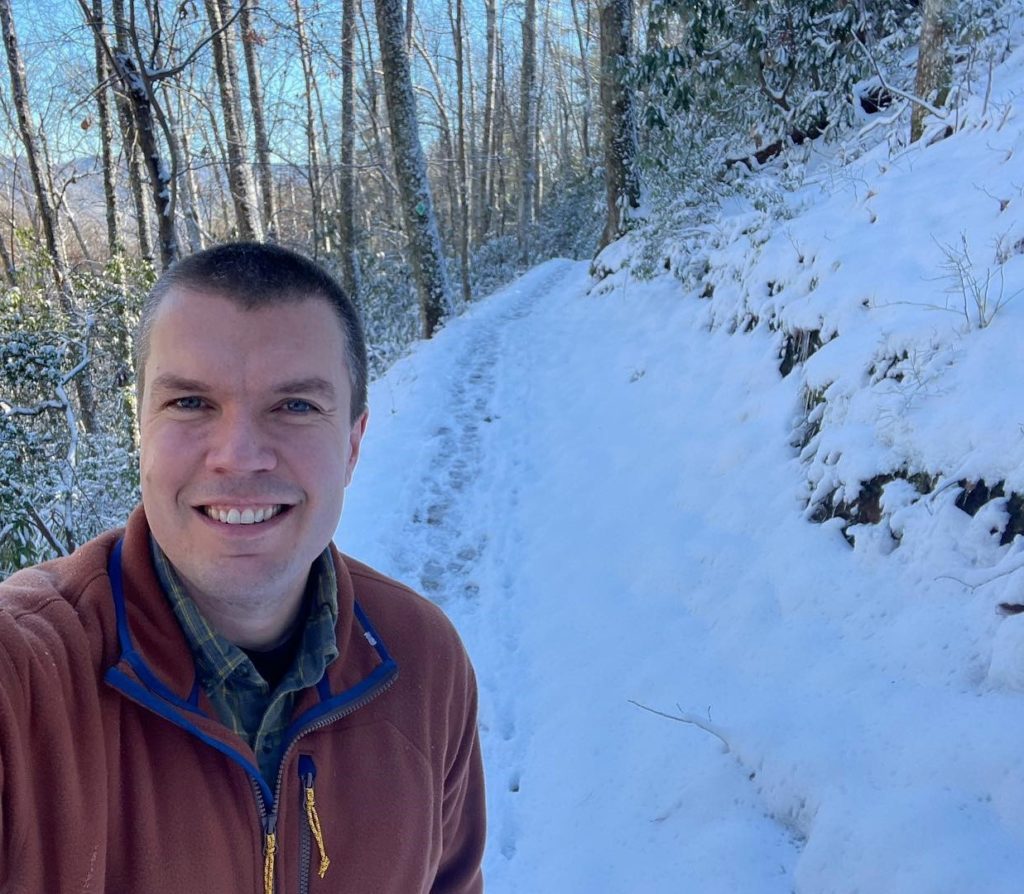 Wally Smith is a biology professor at the University of Virginia at Wise.

Remediating mine sites comes with unique challenges that sometimes get smoothed over in the rush to attract industry, Smith said. It takes work, and work takes money.

Smith has been working with local environmental advocacy groups to remedy damage done by another abandoned mine lands project called Spearhead Trails in St. Paul, Virginia. Marketed as an ecotourism initiative, the ATV trail system had what has been described as a strong positive economic impact, but zealous drivers caused damage to mountain headwaters, requiring additional funds that Smith said wouldn’t have been needed with proper planning.

In a 2021 study, environmental advocacy group Appalachian Voices estimated it would cost over $7 billion to properly reclaim the region’s mine lands and make them safe and stable. Even just employing people in the reclamation work, the study indicated, could create up to 43,000 “job-years” across the region (job-years is a term used by some officials to describe the total number of people working full-time for an entire year). Advocates have called for the revival of the New Deal-era  Civilian Conservation Corps for this purpose, providing work in a region that’s long struggled with unemployment and stagnant wages. U.S. Sen. Bob Casey, a Democrat from Pennsylvania, introduced a bill to do just that in 2021.

In another study, the Ohio River Valley Institute made the case for living-wage labor standards on reclamation jobs, recommending that projects contract with unionized work crews. The organization  estimated reclaiming all abandoned sites could cost as much as $21 billion. Only 27% of abandoned mine lands eligible for cleanup have been reclaimed, according to the study, and Congress has repeatedly avoided raising the tax that funds the program to levels necessary to keep up with accumulating damage at long-abandoned sites.

Clifford Drouet says what he really wants is to employ people longterm in forestry jobs, but there isn’t the funding to do it yet on a large scale. With ARRI, he says he’s started a lot of exciting reforestation projects. Now, he’s putting his hope in the federal infrastructure bill, which set aside $11.3 billion for abandoned mine lands reclamation.

“This ray of sunshine, as I call it, is the 2021 infrastructure bill that was passed back in November,” Drouet said.

Advocates like Appalachian Voices applaud this, but say the bill still lacks specific funds for fixing acid mine drainage, a type of toxic water pollution caused by mine runoff. 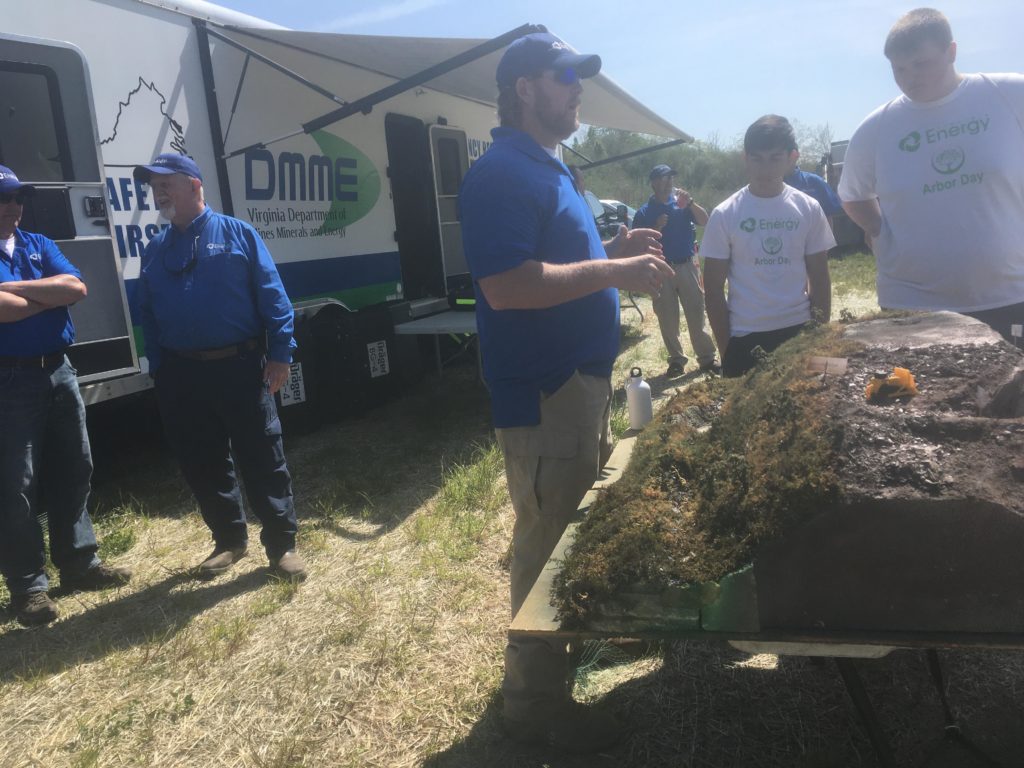 Virginia Energy led education for youth in between tree plantings

Though many reclamation plantings have been volunteer-powered or contracted through non-local companies, Drouet is hopeful that the infrastructure bill will lead to a future of sustainable employment for local people. His vision for a corps of trained foresters is expansive — from former opioid users who’ve struggled with addiction to the formerly incarcerated, to miners and veterans, to the high schoolers who mastered the art of the dibble on that dusty, sunny mine site on Arbor Day.

When asked if they’d ever do this as a job, students, like Liana Sexton and Astrid Banover, aren’t totally sure. It’s a hot day and they’re tired.

“I don’t know about a career,” mused Liana. “I could basically do this as a hobby.”

Astrid, who likes to climb trees in her spare time, looked back over the ridges and the toylike town of Norton, and seemed to think differently.

“I’d probably…” she began, squinting into the distance.

“Oh you would,” cut in Liana, grinning. Astrid raised her eyebrows and shrugged.

They returned to the site, where Liana drove the dibble into the ground.  From far up the hill, the wind carried the sharp sound of the dibble clanking past the hardened coal and rock, followed by Liana’s excited cry. 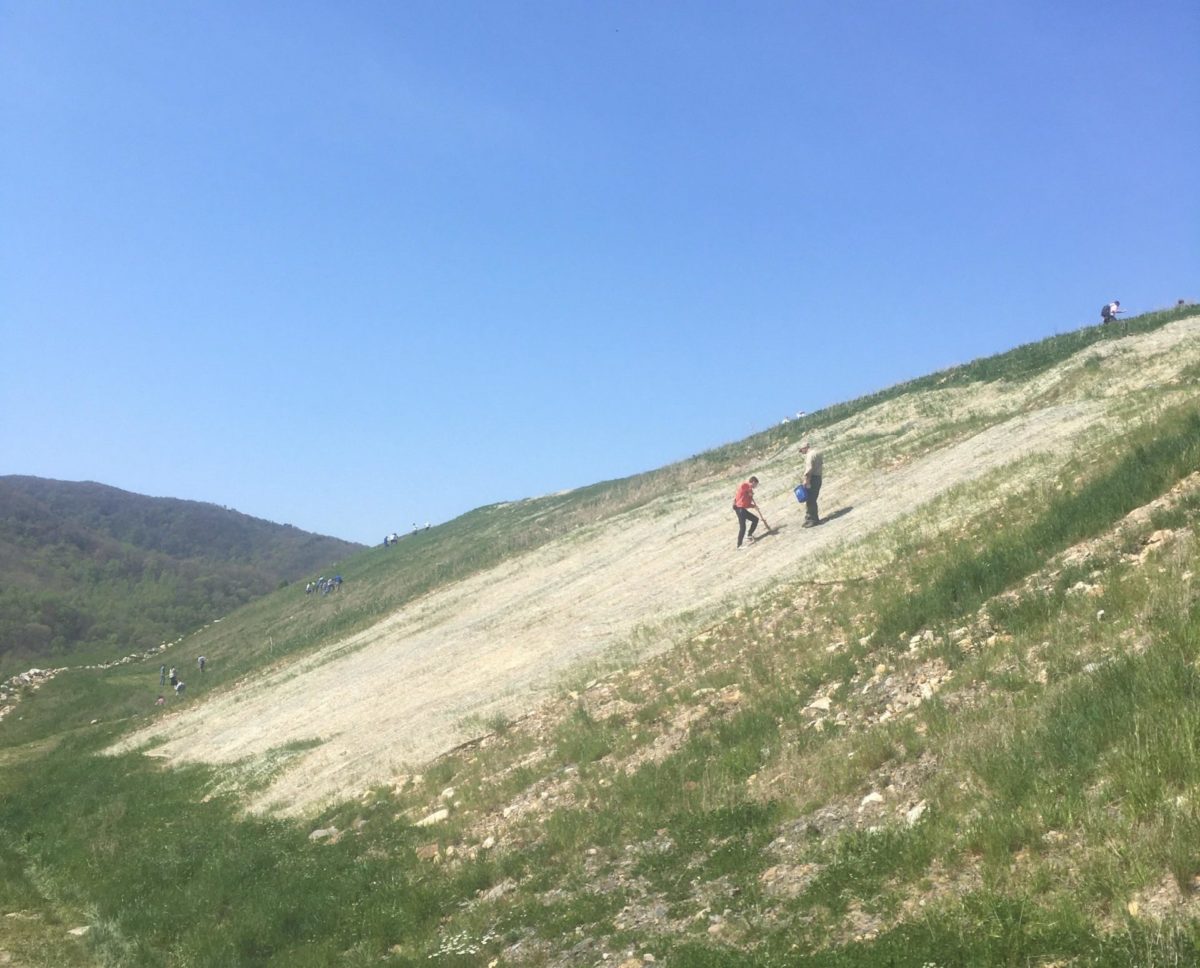