In the last weeks of October, parts of the Ohio Valley saw coronavirus records broken almost every day. In the Ohio Valley, Kentucky and Ohio set new records for hospitalizations due to COVID-19, and Kentucky reported the most positive cases in a single week since the pandemic began — 9,335. West Virginia, which has been insulated from the worst of the pandemic also saw a surge in cases.

The Governors of Ohio, West Virginia and Kentucky have pleaded with people to stop the spread of the virus, wear masks and social distance. During press briefings, all the governors repeatedly warned that more cases could lead to more restrictions. 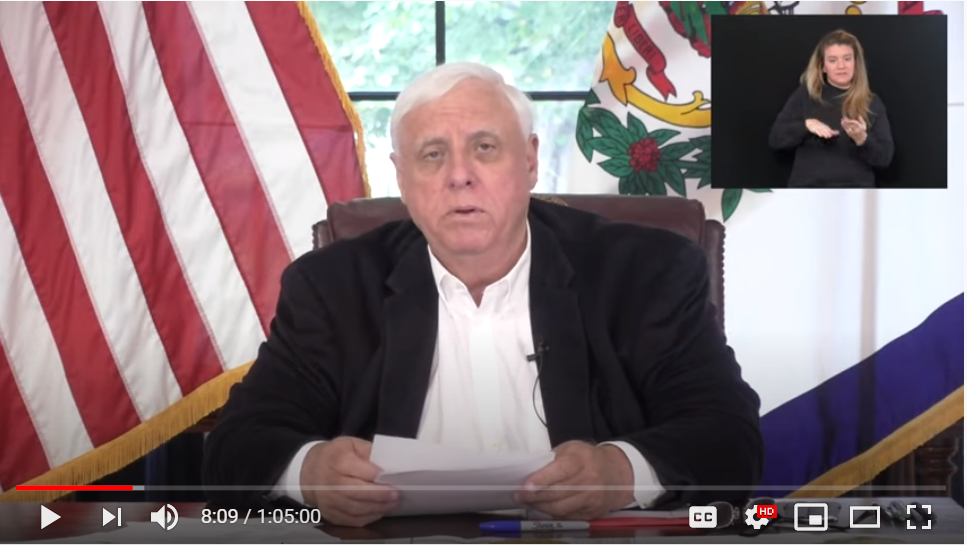 “We just can’t do it twice — or we certainly don’t want to do it twice,” Ohio Gov. Mike DeWine said on Tuesday when asked about another shut down. DeWine said that if counties and cities don’t do their part to fight the spread then, “We will be shut down because the spread will be so bad.”

The surge of cases in the region mirrors an escalation across a broad swath of the country. In the past week, the U.S. reported more than 521,000 new cases of COVID-19, an increase  of 40% over the last two weeks. The record breaking week comes with the 2020 election already underway, when millions will likely be voting during the new height of the pandemic.

Across the country, an increase of hospitalized coronavirus patients have exacerbated dwindling hospital capacities. Yet as the pandemic spirals to unprecedented levels, on Tuesday the White House Office of Science and Technology Policy proclaimed the Trump Administration was “Ending the COVID-19 Pandemic.” When Trump was asked about the coronavirus during the Oct. 22 presidential debate, he said, “We are rounding the corner.” The line has become a regular part of his campaign rallies but Politifact has rated it false.

Health experts have warned that the virus will spike during the winter months. As the season approaches, the Ohio Valley may face simultaneous challenges, from prison spread to full hospitals, all while the number of deaths from the virus grow.

Although West Virginia doesn’t have as many counties with critical spread, the state has seen 2,409 new cases in seven days. Deaths have increased sharply from approximately 100 in August to a total of 451 in October. Twenty percent of West Virginia’s population is 65 and older. The majority of deaths from the virus nationwide have also occurred in that age group. 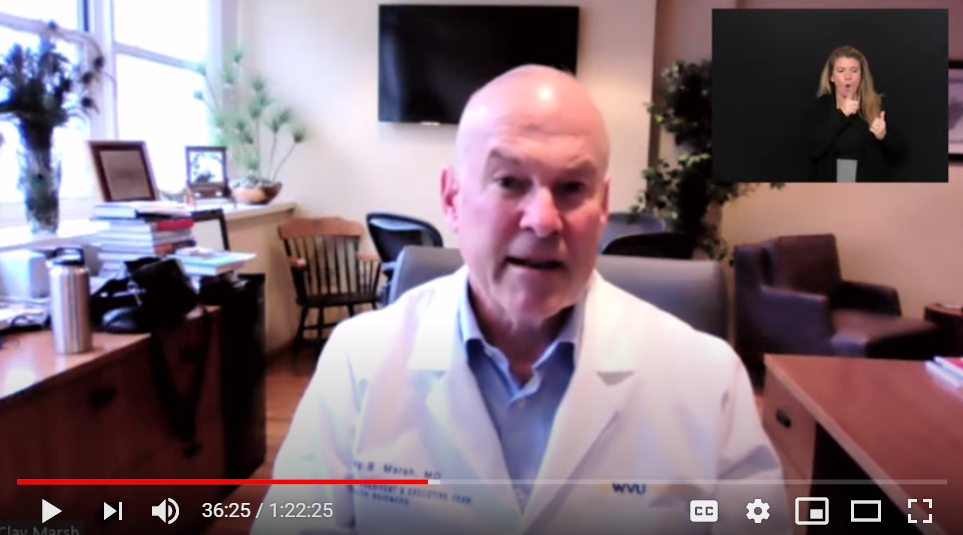 “But as we look at what’s going on in the country, at least right now, you know, we’ve seen the two highest single day total positive testing of the entire COVID pandemic, and we’re seeing hospitals around the country start to fill up again,” Marsh said.

Much of the state is rural and death rates for health conditions like heart disease, diabetes and chronic respiratory illness are higher than the national average. Especially in counties with critical spread like Wyoming County, which has some of the nation’s worst death rates from those diseases. 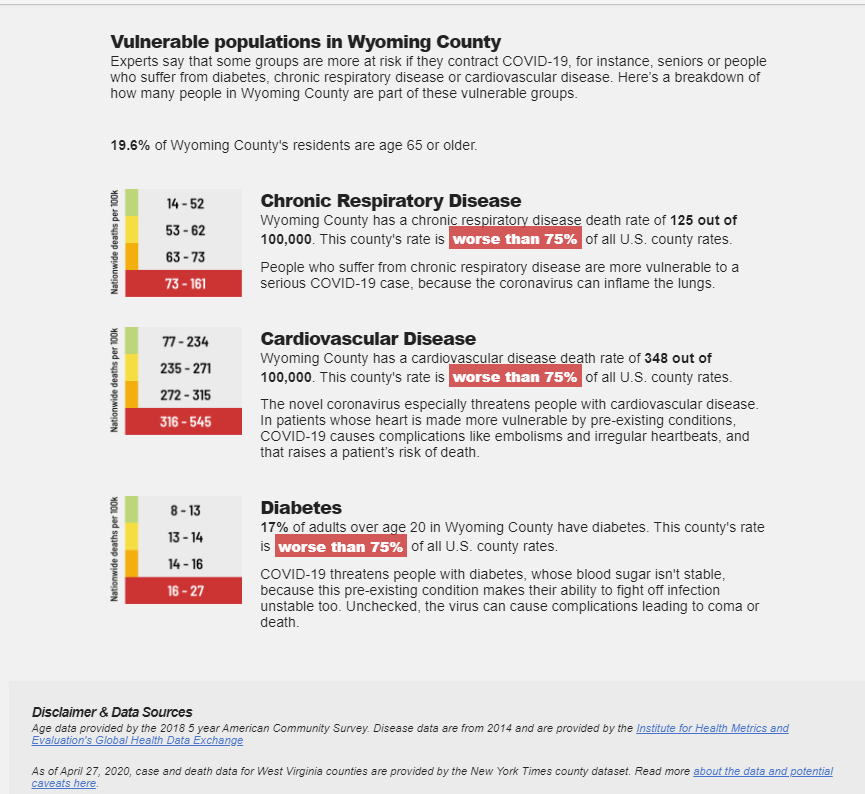 Marsh said every state has its own unique challenges including West Virginia.

“The thing about West Virginia that makes it a bit different is we have this highly vulnerable population,” Marsh said. Adding that, “Even though we’re not a huge state in population, we have a terrain that makes transport sometimes difficult between parts of our state.”

Marsh said telemedicine usage in rural hospitals and increasing helicopter services has addressed some of those rural health challenges.

Many WV hospitals are close capacity, but not with COVID-19 patients, Marsh said. After hospitals postponed elective procedures because of the virus, people have returned to hospitals to have surgeries and things like cancer treatments.

In the coming months, Marsh said it’s up to individuals to reduce the spread.

“And truly if everybody wears a mask and stays physically distanced and does the things that we know reduce the spread, then we functionally have a vaccine today,” he said. “The issue is whether we have the ability to commit to that level of mitigation.”

Lisa Lamb, deputy commissioner of community services and local facilities with the Kentucky Department of Corrections, said in an email that people who tested positive at the prison are isolated from others.

“There are no inmates hospitalized at this time from any prison,” the email said. “Cloth masks for inmates and staff were provided in early April and have been supplemented to ensure the inmates have a fresh one available at all times.” The email also said that inmates have access to hand sanitizer and soap.

Beshear said a state official suggested that Elliott County should not have to follow coronavirus restrictions because the outbreak was limited to the prison, but Beshear disagreed. 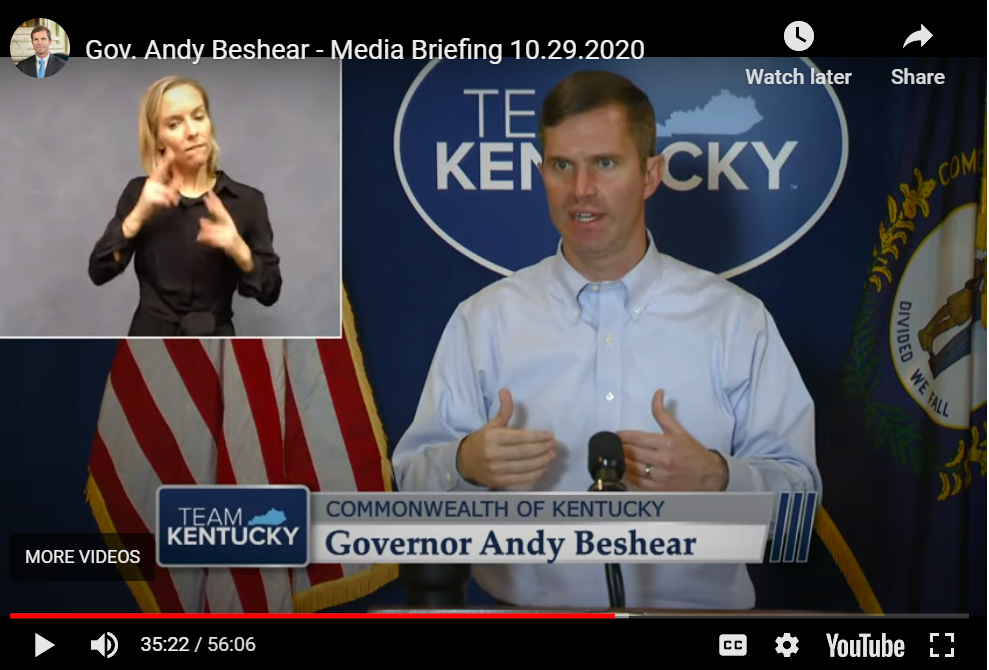 “There’s 300 plus employees, vendors and the rest that go in and out on a daily basis. And with that amount of virus in the facility, people coming in are getting it and people are taking it out.”

Of Kentucky’s 120 counties, 68 are classified as red counties or counties with critical spread — more than 25 cases per 100,000 people. Beshear said red counties should follow updated guidelines released every Thursday.

In Ohio, Gov. Mike DeWine announced on Tuesday that 82 of Ohio’s 88 counties were classified as critical spread counties. According to Johns Hopkins Coronavirus Resource Center, Ohio has recorded 18,507 cases and 114 deaths in the past seven days.

Since Oct. 15, hospitalizations have mostly increased from 1,073 to 1,629 on Oct. 29. Coronavirus patients have occupied anywhere from 64% to 71% of hospital bed capacity.

DeWine said when people attend gatherings without masks, it hurts the entire community. 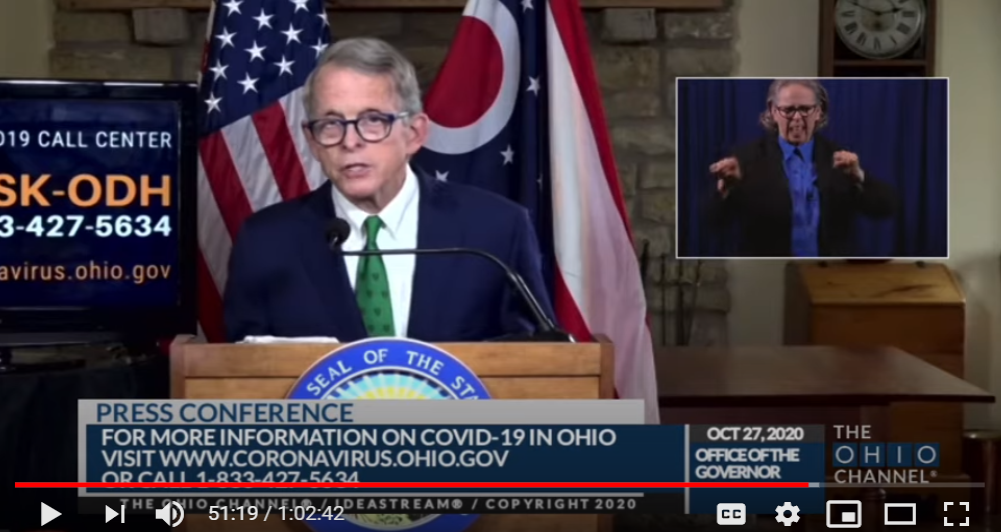 During DeWine’s Tuesday press conference, he was asked if Ohioans should listen to him or  President Trump, who wrote a tweet that day decrying media coverage of the pandemic.

“Well, I can only speak what I see in Ohio, and what we see in Ohio is … we’re not headed the right direction; we’re headed the wrong direction,” DeWine said. He credited the president for designating funding to the development of a vaccine.