Listen Live
Newsletter
Donate
After ‘Dark Day’ In Washington, Ohio Valley Lawmakers And Residents Who Were There Take Stock

After ‘Dark Day’ In Washington, Ohio Valley Lawmakers And Residents Who Were There Take Stock

Owensboro, Kentucky, pastor Brian Gibson spoke at an event in Washington, D.C., Tuesday that combined religion with support for President Donald Trump’s attempt to overturn the results of the election.

“How many of you all believe that the people we elected are going to do what’s right tomorrow?” Gibson asked the crowd at Washington’s Freedom Plaza, as flags emblazoned with Trump’s name fluttered behind him. “And they are going to stand against all of the injustice and the fake votes?”

Gibson was among the dozens — perhaps hundreds — of people who traveled from the Ohio Valley to attend events planned to coincide with the Congressional session on January 6 to certify the results of the Electoral College. That usually mundane ceremonial event makes official the election results, in this case making Joe Biden and Kamala Harris President and Vice President. But Gibson and others were hoping for a different outcome. 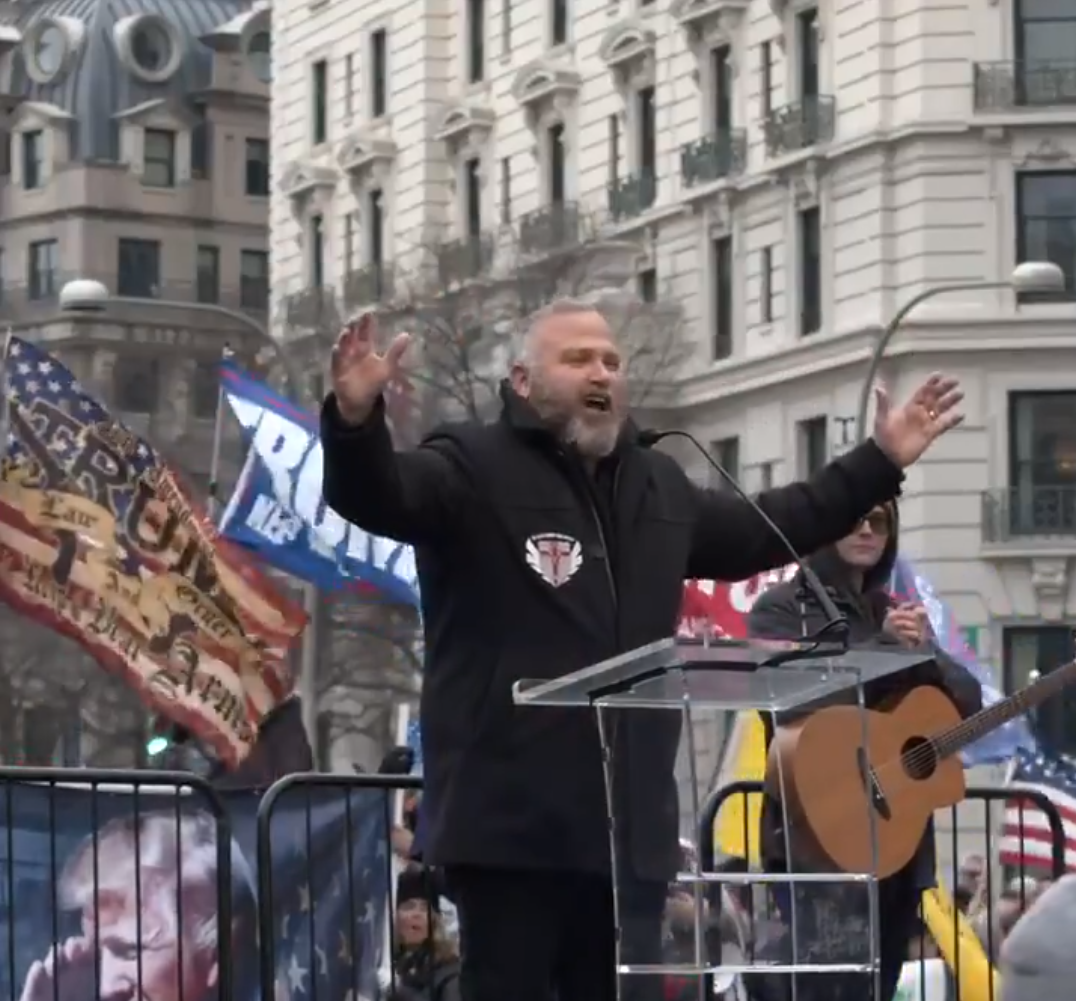 Gibson said he also attended the Trump rally on Wednesday. There Trump repeated his false claims about a stolen election, pledged he would never concede, and urged the assembled crowd to march to the U.S. Capitol.

“We’re going to try and give them the kind of pride and boldness they need to take back this country, so let’s walk down Pennsylvania Avenue,” Trump said as the rally concluded.

Gibson said his feet were freezing and he had returned to his hotel when he got a shocking phone call: People were forcing their way past Capitol police.

“How in the world do unarmed people storm the Capitol, which should be one of the most secure buildings in the United States of America when it’s in session?” he asked. He said he changed shoes and made his way to the Capitol to see for himself.

“I couldn’t believe what I was seeing. People actually breached the doors,” Gibson said. He condemned the violence and said in his opinion a “few bad actors” ruined what had otherwise been a peaceful event.

Derrick Evans, a recently elected member of the West Virginia state legislature from Wayne County, had traveled to Washington with a chartered bus load of people from West Virginia and neighboring parts of Kentucky and Ohio. 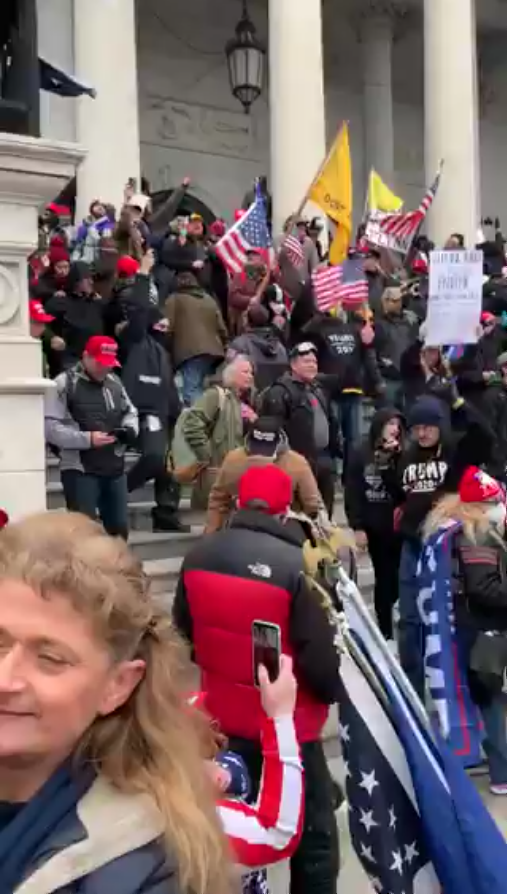 Image from video posted to social media by Derrick Evans.

As originally reported by West Virginia Public Broadcasting, Evans posted on social media videos of himself with others who entered the Capitol along with the mob of extremists.

“We’re in!” a voice can be heard on the video. “We’re in! Derrick Evans is in the Capitol.”

The video clips showing Evans wearing a helmet and entering the Capitol were later deleted from his account, but not before the videos had been shared by others on multiple social media platforms.

Afterward, Evans claimed in a brief statement that he was in D.C. as an “independent member of the media to film history.” Some of his colleagues have called for his resignation or removal from the state legislature, and an online petition demanding his removal had gathered nearly 40,000 signatures by Thursday.

On Thursday a statement from a lawyer representing Evans said, “He engaged in no violence, no rioting, no destruction of property, and no illegal behavior.”

Prior to his election, Evans was known for extreme protests at West Virginia’s sole remaining abortion clinic, which led a judge to issue a restraining order against him for “stalking” and “repeated credible threats” against female employees at the clinic. 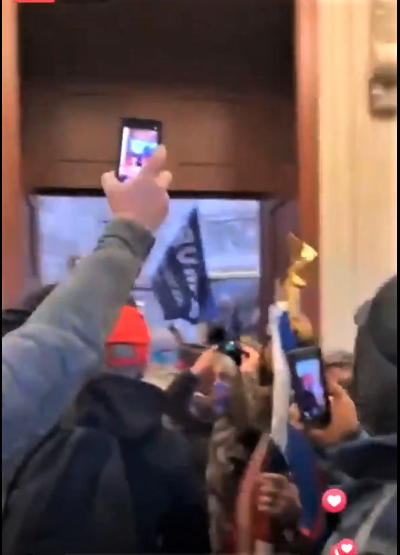 Still image from Evans video inside the Capitol as rioters forced their way in.

Members of Congress were debating an objection to Arizona’s electors Wednesday afternoon when they were forced to flee the House and Senate chambers as the violent mob overran the Capitol. When they returned to business Wednesday evening lawmakers from around the region were quick to condemn the violence.

Kentucky Senator Mitch McConnell, now in the last days of his position as the Senate’s Majority Leader, made a strong statement in support of certifying the election results and called the violence that day a “failed insurrection.”

On the Senate floor, Kentucky Republican Senator Rand Paul reflected on the speech he had written before the violence.

“I was planning to say I fear the chaos of establishing a precedent that Congress can overturn elections,” Paul said. “Boy, was I right. Chaos. Anarchy. It’s wrong and un-American.”

Ohio Democratic Senator Sherrod Brown called it a dark day. “Domestic terrorists attacked our seat of government, at the behest of the President of the United States,” Brown said in a statement. “This was his last, desperate attempt to overturn the will of the American voters.”

Brown’s Republican counterpart, Senator Rob Portman, said the U.S. Capitol “belongs to every American and is a symbol of the citadel of democracy. An attack on the Capitol building is an attack on every American.”

Portman said it was time for President Trump to “embrace the peaceful transfer of power.”

“Rudy said, ‘so let’s have a trial by combat,’” Manchin said of the rhetoric at Trump’s rally. “Don Jr. is instigating it. They’re all instigating it, so the President really is culpable for this.”

However, even after witnessing a violent insurrection, eight Republican Representatives from Ohio, Kentucky and West Virginia joined other Republicans in objections to some of the state electoral results.

Those included Rep. Hal Rogers, who represents eastern Kentucky’s 5th Congressional District, who condemned the violence of the day as “un-American” while also explaining his votes to object to the electors from Arizona and Pennsylvania. Rogers cited no evidence of election fraud in his statement. Rather, he said, “I received hundreds of calls and emails from people across southern and eastern Kentucky questioning the integrity of the presidential election in other states.”

Democratic lawmakers have challenged some state electors in recent elections, but in those cases the losing candidates (Hillary Clinton and Al Gore) had already conceded the election, even though both had won the popular vote. (Gore had the unusual chore as Vice President of presiding over the Congressional certification of his own electoral defeat.) In this case, however, the objections came just after Trump had repeated his false claim of a “stolen election” and pledged to never concede.

The objections Wednesday failed in overwhelming votes in both chambers, but a new threshold had been crossed. With no evidence of electoral fraud, members of Congress had challenged an election in support of a president who defied the peaceful transfer of power, a hallmark practice of authoritarianism.

Joshua Douglas, a University of Kentucky law professor and election law expert, said the events at the Capitol Wednesday were a direct result of people in the Republican party refusing to accept the results of the election.

“Absurd claims of massive voter fraud without any evidence whatsoever,” Douglas said, “and unfortunately millions of people have believed them.”

Wednesday was the final turn in a circle of misinformation: Months of repeated false claims from Trump and many of his supporters persuaded many Republican voters of a “stolen election.” Those voters then called and emailed their Congressmen, such as Rogers, who then used those calls and emails as justification to object to the election’s certification. That challenge to the certification became the focal point of demonstrations orchestrated by the Trump campaign, which had originated the false claims in the first place.

Douglas said that while McConnell’s statements Wednesday supporting the outcome of the election were “two months too late” they present a stark choice for Republicans, effectively creating two parties in one.

McConnell’s spouse, Elaine Chao of Kentucky, who has served as Trump’s Secretary of Transportation, made her decision on Thursday. Chao announced her resignation effective Monday — the first Trump cabinet member to do so since the insurrection. (Education Secretary Betsy DeVos became the second, announcing her resignation later in the day.)

In a statement to Transportation Department employees, Chao said, “Our country experienced a traumatic and entirely avoidable event as supporters of the President stormed the Capitol building following a rally he addressed. As I’m sure is the case with many of you, it has deeply troubled me in a way that I simply cannot set aside.”

It has been the honor of a lifetime to serve the U.S. Department of Transportation. pic.twitter.com/rFxPsBoh6t

Derrick Evans and others who made their way into the Capitol may have reason for concern as well. U.S. Attorneys around the region say they will pursue charges related to the insurrection if evidence supports it.

The U.S. Attorneys for the Eastern and Western Districts of Kentucky, Robert Duncan Jr. and Russell Coleman, pledged to prosecute anyone who travelled from the region to DC to “commit violent criminal acts.”

Acting U.S. Attorney General Jeffrey A. Rosen released a statement Thursday vowing to identify and charge anyone who participated in Wednesday’s attack on the Capitol Building.

“We will continue to methodically assess evidence, charge crimes and make arrests in the coming days and weeks to ensure that those responsible are held accountable under the law,” Rosen’s statement said.

In the Capitol, as cleanup and repair from Wednesday’s damage was still underway, lawmakers were considering calls for Trump’s removal from office, including those by some Ohio Valley lawmakers.

Democratic Senator Sherrod Brown of Ohio and Democratic Representative John Yarmuth of Kentucky have called for Trump’s removal, either by invoking the 25th Amendment or by a second impeachment, this one expedited in order to happen before the end of Trump’s term in less than two weeks.

“Every day that he remains in office is an unacceptable threat to our democracy and America’s place in the world,” Yarmuth said.

UPDATE: On Friday, Jan. 8, federal prosecutors charged Derrick Evans with entering a restricted area in connection with his actions at the Capitol, and Evans was taken into custody. Details here from our partners at West Virginia Public Broadcasting.

On Saturday, Jan. 9, Evans announced his resignation from the West Virginia legislature.

The Ohio Valley ReSource gets support from the Corporation from Public Broadcasting and our partner stations.