For years, millions of parents and their children have received free books in the mail from the Dollywood Foundation. It’s part of the “Imagination Library” to ensure that kids get a new book each month so they can learn the joys of reading. Recently, the library announced that it will get a bit bigger. The foundation announced a partnership with the American Printing House for the Blind to expand the offering to include books in braille. 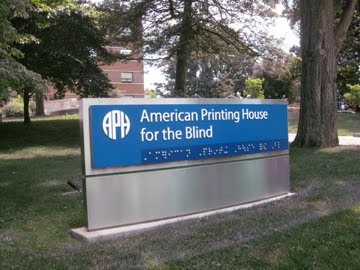 Soniya Patel’s three-year-old daughter loves getting her book each month from the Imagination Library. But Soniya is blind, so reading with her daughter is a difficult experience. Until now, someone has had to read her the text and she used a Braille typewriter to make her own copies.

“I’ve Brailled several since she was born,” says Patel “because that’s the only way that I’d be able to read it to her you know, if it’s not done then you’ve got to find a way to do it.”

She says getting books in Braille will lift a barrier between her and her daughter.

The books will be produced here in Louisville at American Printing House’s factory. It’s filled with modern dot-making machines and even some from the 1800s.

“It’s gonna put the dots on this piece of metal and this can be used on a mechanical press,” Williams says “so to get the dots on here the people in translation translated it and created an electronic file and that file drives this machine that stamps these dots.”

These plates are for text. But for graphs, charts and pictures, the printing house uses a device that looks like a sewing machine. Worker Kathy Peak sits in front of it, and guides a plate through by hand.

I asked her what she was working on and she replied: “this is a physics test page from the ACT.”

In addition to printing Braille, APH develops technology too. Last year it released an iPod-like device that reads and stores text as audio, called the Book Port Plus.

The Organization is also developing a new machine called a Heidelberg. It’s a printing press manufactured in the 60’s that has been modified to emboss pages with Braille.  It uses the metal plates that are also used by the Clam Shell.  The Clam shell has been in use since around 1900, and is the fastest embossing machine at the factory.

And then there’s the Norwegian machine called a Braillo. It embosses pages electronically and eliminates the need for a person to hand collate the sheets.

And while there’s no shortage of synthetic speech programs for computers or talking toys for kids, Soniya Patel says you can’t replace the developmental value of learning to read Braille and the independence that comes with it.

“It’s empowering for me as a parent to be able to read to my child at this age,” Patel says “so you know the idea of having Braille in front of a child that is three years old that is blind is you know they kind of get an idea of you know these dots are words, you know?”

(A version of this story also ran on All Things Considered)