Meet One Group Caring For Kids Caught In The Addiction Crisis

The Ohio Valley’s opioid epidemic has effects far beyond the individuals struggling through addiction, with families and children suffering as well. An organization that helps children in abuse cases now sees substance abuse as a leading contributor, and could be overwhelmed by the addiction crisis.

Court Appointed Special Advocates for Children — CASA for short — is a nationwide organization in which community volunteers are designated by judges to serve as the voice for children involved in abuse and neglect cases.

The opioid epidemic has contributed to an increased caseload for courts dealing with abuse and neglect cases. And in West Virginia, CASA programs are struggling to recruit enough volunteers to keep up. 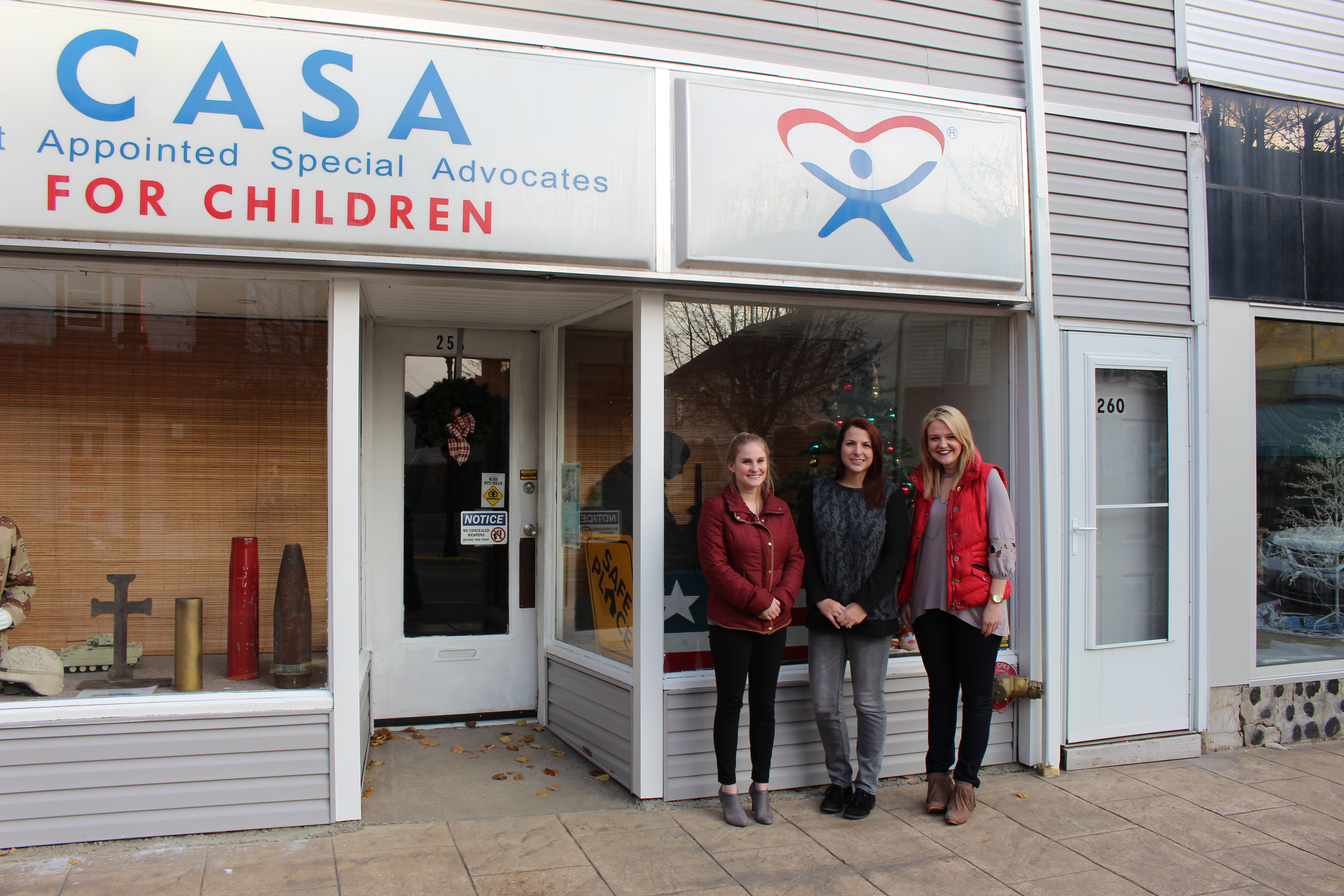 ‘It’s going to be a lot messier’

Tessa DiTirro moved to the northern panhandle of West Virginia to become a journalist at WTRF-TV.

She had heard of CASA but it wasn’t until after working on a story with the local organization that she decided to go through the 30 hours of training to become an advocate.

“I’m still on my first case,” DiTirro told me during a visit in December to the CASA headquarters for Marshall, Ohio, Tyler and Wetzel Counties in Moundsville. “I’ve been working on it since August.”

This case involves an infant and a young child who investigators determined were neglected due in part to a parent’s struggles with addiction.

The aim of any CASA is to remain objective while getting to know both the children and parents.

But objectivity can be difficult, as DiTirro has seen first-hand the emotional effect the case has had on the oldest child.

“It was sad for him on his birthday,” DiTirro said. “His parents couldn’t be there. His parents didn’t even reach out to him, which really made him sad. But I brought him a little toy and we had a great conversation.“

She is able to remain objective thanks to the extensive training, which teaches advocates to learn about the whole family.

“Sometimes I do like to look at the other members of the family and balance it out,“ she said. “Because if I was just going by my kids, I would love to take them and go play and just have fun. But that’s not what it’s all about.”

The volunteer coordinator DiTirro works with is Erin Jordan, who started as an intern in January but became one of three paid staff members after graduating from West Liberty University in May.

As advocates for the children, Jordan said objectivity is essential to building parents back up in hopes of reunification.

Reunification is not always in the best interest of the child, however, and the region’s addiction crisis is making it difficult.

CASA programs are more often scanning for cases like DiTirro’s where the abuse or neglect can in part be attributed to a parent’s addiction to opioids.

The epidemic is also leaving CASA programs with limited resources.

A Need for Volunteers

Neglect related to a parent’s struggle with addiction is nothing new for CASA. Advocates nationwide have dealt with these cases since the program was founded in the late 70s by a judge in Washington.

But the CASA program DiTirro and Jordan work for has seen its caseload increase significantly due to the opioid epidemic.

CASA encourages a one volunteer to one case ratio. (A case could include more than one child, as DiTirro’s does.)

Harrison’s organization was working with around 30 volunteers for 2016, as of December. Recruiting enough volunteers to keep up with the caseload has proven to be a challenge.

“When your caseload has doubled and then tripled just in two years, finding those CASA volunteers willing to give the time and energy to these cases is difficult,” Harrison said. 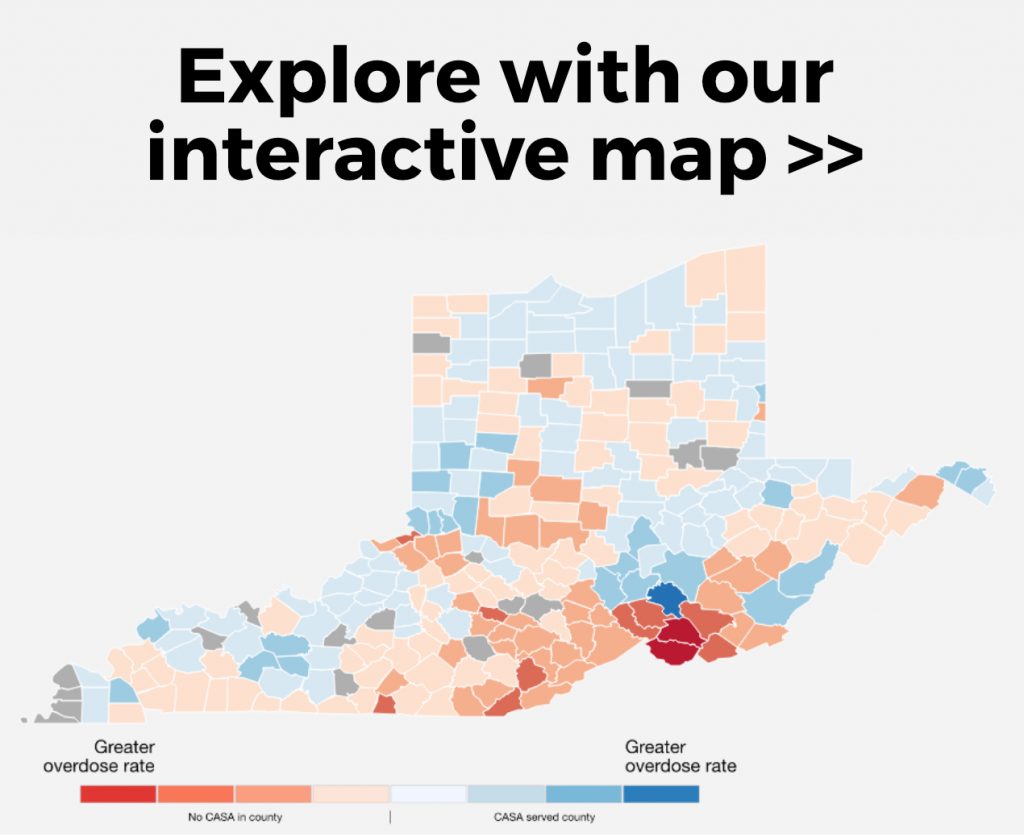 The more experienced volunteers have been put on multiple cases if Harrison believes the children will still be served. Jordan and the other paid staff member are on deck if needed.

West Virginia’s programs are all nonprofits, most receiving the majority of their budget through the Victims of Crime Act Crime Fund and other grants.

The remainder comes through donations, which, while appreciated, can’t quite cover the demand for CASA’s service.

“We’ve grown from 50 kids to 300 kids and my budget has not quadrupled,” Harrison said.

The Mountain State is not alone in facing these problems.

When directors for 40 CASA programs covering 47 Ohio counties gathered this month at a conference in Columbus it didn’t take long for the opioid epidemic to come up.

“You all have been affected,” Doug Stephens, the statewide director who helps coordinate the local programs, said to the group. 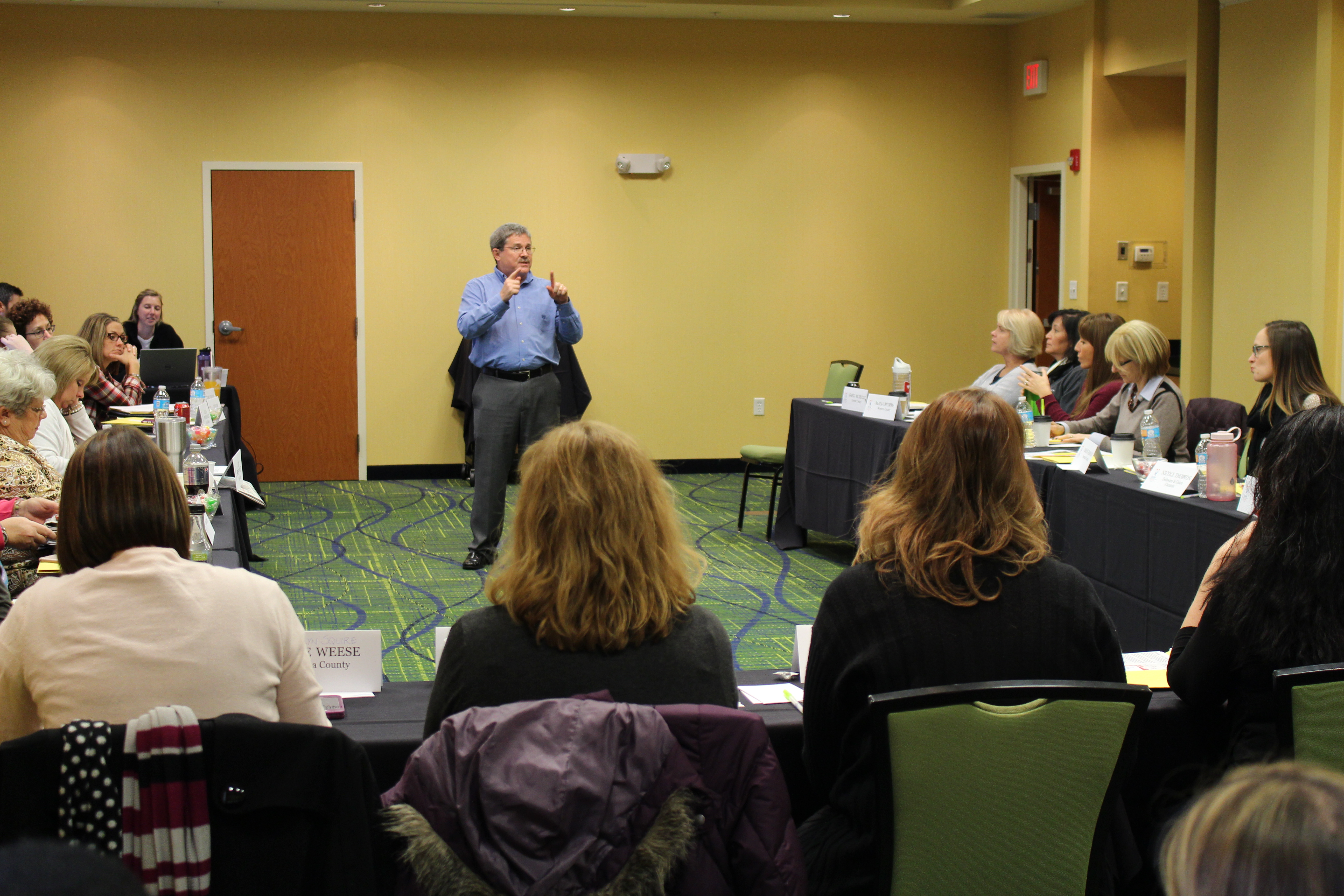 The number of children served by Ohio’s CASA programs has increased by 872 between 2012 and 2015, according to their data. Projections indicate 2016 will see another increase for a total of 8,500 children served.

Volunteers have not increased as the projections indicate 2,100 will have served this year, six more than in 2012.

“It makes it very difficult to serve all these extra children,” Stephens said. “More importantly, it tempts us to give more cases per volunteer. And that’s the complete opposite of what we want to do.”

But Stephens remains optimistic and embraces the challenges presented by the opioid epidemic.

“We have wonderful community volunteers,” he said. “I think there are more out there, they just don’t know us. I think the community is always looking for ways to support the children that are put into awful positions. The first step is we have to figure out a way to get more volunteers.”

Lawmakers in Columbus are taking notice.

One state senator has proposed providing $300,000 annually from Ohio’s general revenue fund for CASA programs to be distributed based on need created by the opioid epidemic.

With Ohio anticipating a tight budget, that funding is not a sure thing. But CASA programs are pleased with the attention from the statehouse.

“We are fortunate and we do appreciative that we have a number of legislators that support us,” Stephens said.

A regional collaborative being developed in southeast Ohio could provide  a new way to help manage resources and boost newer programs..

Athens County CASA, established in the 90s, is most experienced in the region and was approached about leading the younger programs.

“Having the opportunity to share our resources, share our lessons that we’ve learned, I think will only help those programs and get them a good leg off the ground,” Jenny Stotts, Athens CASA Executive Director said.

Sharing strategies to build up recruiting will be a priority.

Even with decent resources, expanding staff and support from the community, Stotts said even they could use more volunteers. 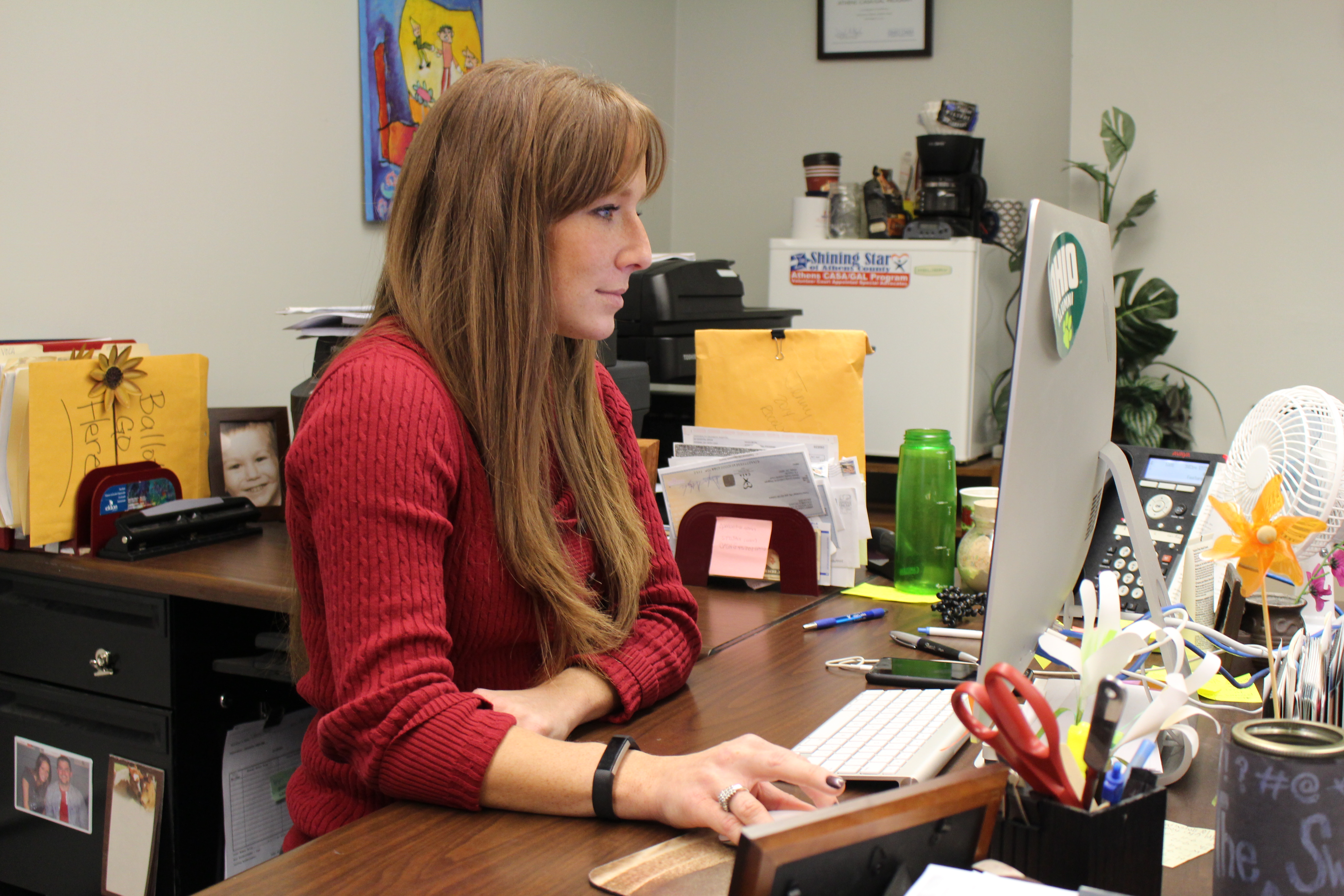 Travel to Kentucky and you will hear similar stories from CASA program directors.

The caseload for the 18 programs currently operating across 41 counties has increased over the past few years without a significant increase in recruiting.

State lawmakers took notice recently and appropriated $3 million of state funding over the next two fiscal years for CASA. The move marks the first time CASA with be receiving state funds in 34 years of the organization operating in Kentucky. It also makes it the only such program in the region to receive money directly from their state.

The funding boost will enable CASA to expand with two new programs set to cover five counties at first, with plans to serve three more in the future.

Andrea Bruns with Kentucky’s statewide CASA organization does not attribute the increased caseloads entirely to the opioid epidemic. But said they are noticing effects in counties with the highest addiction rates.

Judges around the Ohio Valley that appoint advocates from CASA programs in their courts are voicing their support.

Judge Robert W. Stewart presides over the Probate and Juvenile courts in Athens County. He has interacted with CASA for over a decade and speaks highly of the program.

“People who raise their hand and are willing to go through the training because they care about the idea of helping abused and neglected children is such a positive,” he said. “It’s hard to think of anyone who would be against an organization like CASA.” 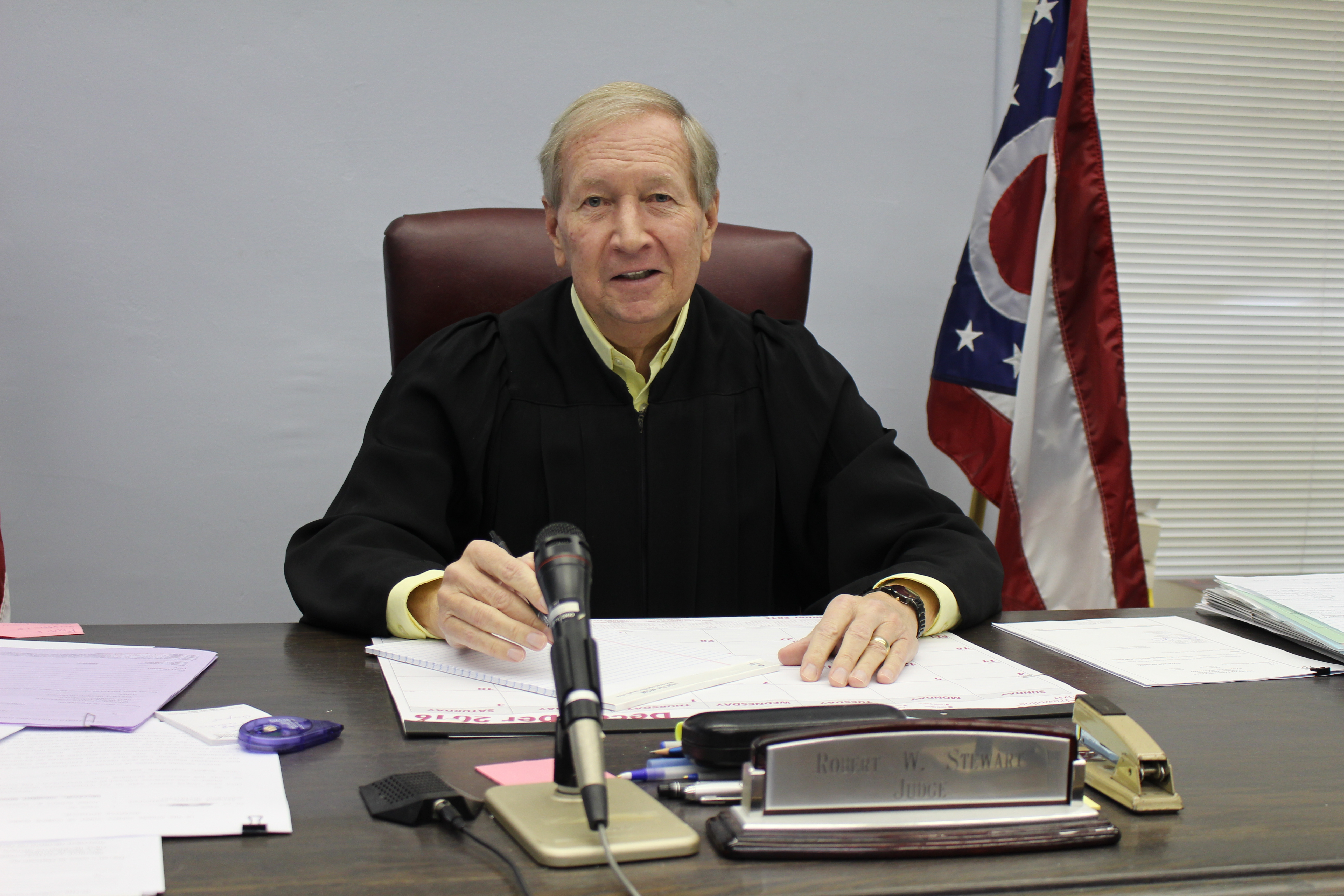 Stewart said the program provides practical services to the court systems in which they serve.

Volunteer work from CASA cuts down on court cost significantly each year.

Stewart estimates that volunteer advocates in Athens County put in somewhere around 7,000 hours of work between training, working with families and filing recommendations to the court.

Courts appoint a layperson or attorney as the child’s advocate, or guardian ad litem, in counties without CASA programs.

Stewart estimates that hiring a guardian to work 5,000 hours to perform the services of a CASA volunteer would quickly become a burden.

Abuse and neglect cases involving substance use disorders are equally challenging for the courts system as they are for CASA, if not more so.

Stewart said with a noticeable increase in opioid-related cases, a trustworthy advocate helps courts keep the focus on the child.

“Having someone who is able to present it from the eyes of the child and look only at the best interest of the child is a very refreshing outlook.”

He encourages counties without CASA programs to do serious research and find out if they could benefit.

The opioid epidemic creates challenges for CASA programs and volunteers that are not within their control: A lack of timely addiction treatment facilities for parents, a lack of housing and job services and a foster care system in need of more foster families.

But programs across the Ohio Valley will continue to focus on the changes they can make, starting with finding new advocates.

For Tessa DiTirro, balancing her job as a journalist and her work with CASA can be a challenge. She cautions those interested that it is not “light” volunteer work.

“I would say do it, but don’t do it if you don’t have the passion,” she said.

Volunteers are expected to work an average of 10 hours a month after the initial 30 hours of training plus time for annual training.

DiTirro said the work is rewarding. And to watch the positive impacts on a child who has experience abuse and neglect makes it worthwhile.

More information about CASA programs in your state can be found at casaforchildren.org.