The CEO of a coal company that does business in Kentucky has been indicted on federal charges relating to an international money laundering, wire fraud and bribery scheme.

Hunter Hobson is the CEO of INMET Mining, which owns the Darby Fork mine in Harlan County, where a 33 year-old roof bolter died in a mine collapse last month. Federal investigators are still looking into that incident.

The federal indictment alleges that between 2016 and 2020, Hobson paid bribes for a $143 million coal contract in Egypt while he was vice president of an unnamed coal company in Pennsylvania.

The bribes described in the indictment were paid to Al Nasr, an Egyptian state-run coke and chemical company. Hobson also allegedly conspired to secretly receive a portion of the commissions paid to the sales intermediary as kickbacks, and that all communications between parties occurred on encrypted messaging applications.

Since 2007, INMET Mining has managed Kopper Glo Mining, which has operated mines in Kentucky and Tennessee since 1958.

Hobson’s attorney did not return a request for comment.

The Darby Fork Mine was purchased from the Blackjewel coal company when it declared bankruptcy in 2019, causing mass layoffs throughout the Appalachian and Wyoming coalfields.

Kopper Glo and INMET purchased several Kentucky mines in August of 2019, and shortly thereafter laid off at least 100 miners. At the time of the initial purchase, Kopper Glo stated its strong safety record across the mining industry. 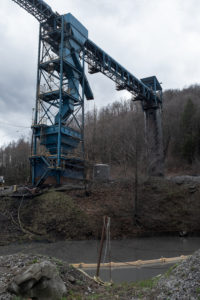 The Darby Fork mine in Harlan County

After the roof collapsed on James Brown in the Darby Fork mine, Hobson sent a press release stating the company’s support for the family.

“Our thoughts and prayers continue to be with James’ family and also his coworkers at INMET,” Hobson said. “We were praying for a different outcome.”

Brown’s widow and her attorney report that they have not been able to participate in the investigation of Brown’s death to the extent they had hoped, and will instead have to wait up to six months for further answers.