Farmer Fatigue: Farmers Grow Weary Of Trade War, But Most Stick With Trump

Tom Folz drives around on a sunny, August afternoon and surveys the thousands of acres of dark green, leafy soybean plants and tall stalks of corn he grows on his sprawling farm in Christian County, Kentucky.

At 54, Folz has wispy, white hair matching his white mustache. It’s taken him several long work weeks to get his crop to where it is today.

“You got to be a little bit ‘off’ to be a farmer,” Folz said. ”You don’t get to enjoy anything during harvest and planting season because we’re working.” 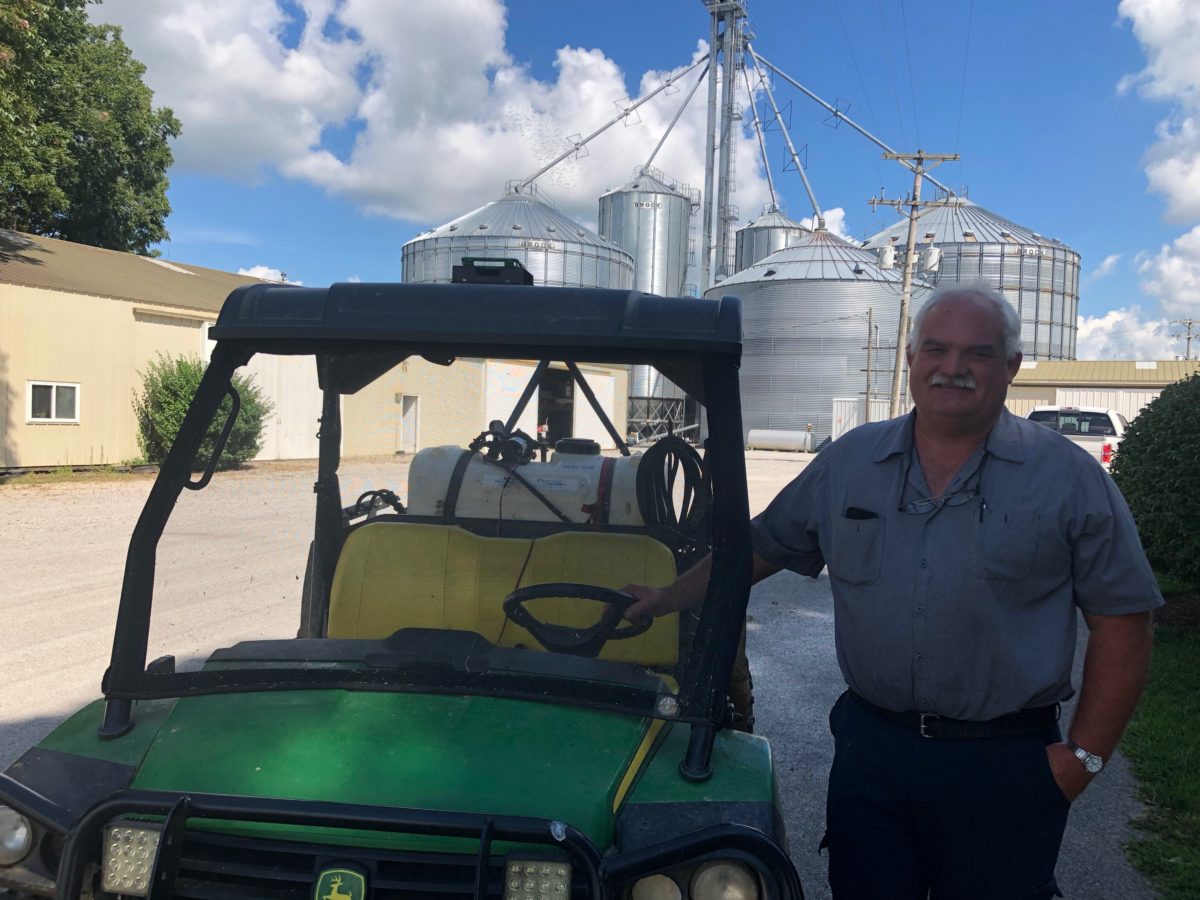 He said his crop has grown well, which is something not all farmers here can say. Ohio Valley farmers were unable to plant almost 1.6 million acres this year – most of that in northwest Ohio – because of excessive rainfall and flooding. Across the country, farmers faced similar weather-related struggles.

On top of bad weather, Folz worries about the country’s increasingly stormy relations with trading partners, especially China. A trade war with escalating tariffs by both the U.S. and China has stretched for more than a year now, with China firing the latest salvo Friday: the announcement of more retaliatory tariffs on $75 billion worth of U.S. goods, including soybeans, pork, wheat, and other agricultural products. Folz fears it will continue to depress the prices he gets for his harvest, putting more stress on his family-run business.

“Everything is just scary. And there’s so many things that we think we’ve figured out, when really, we don’t have any idea what’s going on,” Folz said. “Especially when a tweet comes out and drives prices down ten or fifteen percent, or a report comes out and drives corn prices down ten percent,” he said. “You go from a profit margin to a substantial loss from numbers real quick.”

Two weeks ago Folz signed up for the second round of the Market Facilitation Program, a Trump administration effort to give a portion of $16 billion as direct trade relief payments to affected farmers.

Folz said he doesn’t want these payments. He doesn’t like government subsidies in general, and wants trade deals reached as soon as possible. “I wish it would settle today,” he said.

With no strong signals that Trump will reach a trade deal with China anytime soon, Folz said the relief payments keep farmers afloat in the meantime.

“If [Trump] doesn’t keep stepping up with these different little payments to help save us until it gets done, there’ll be a lot of farmers who won’t be in business in a couple of years if it lasts that long,” Folz said. 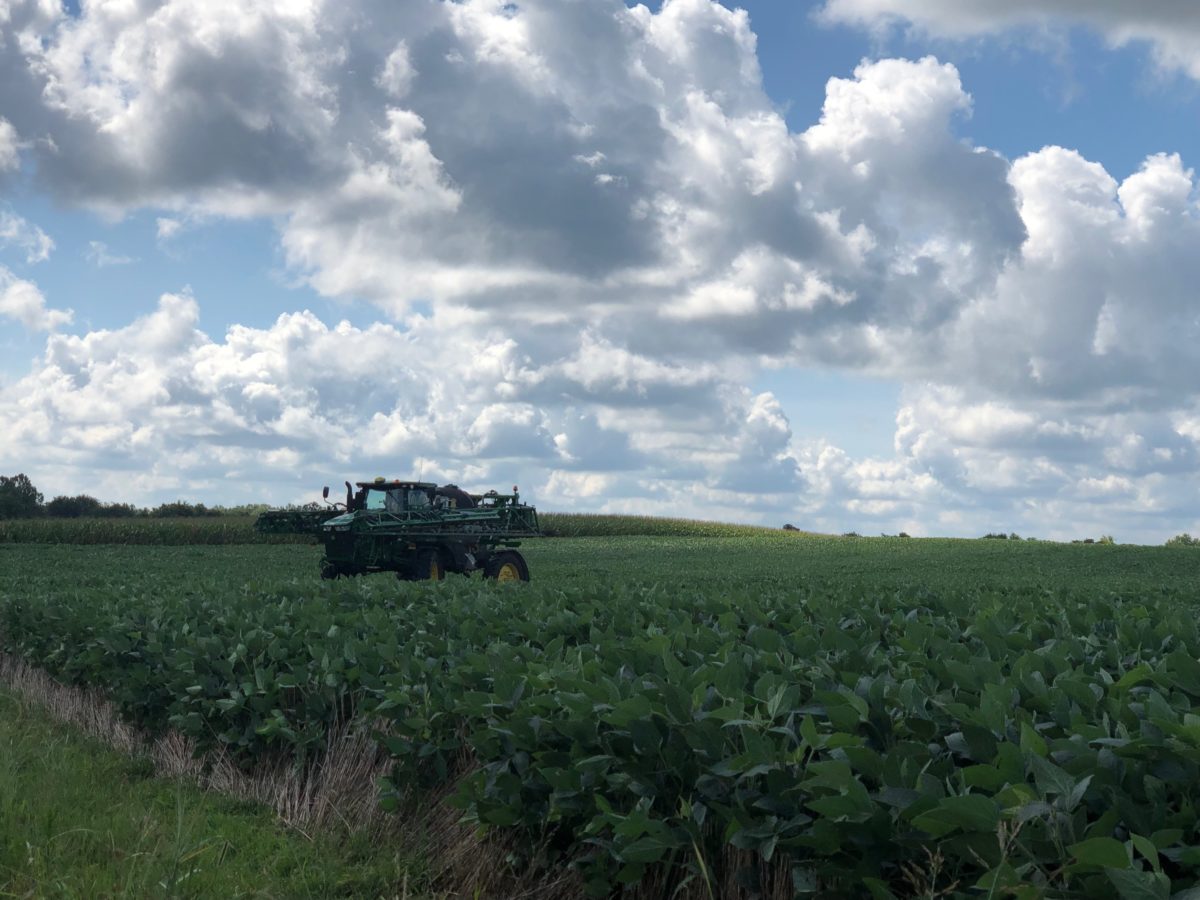 “Everything is just scary,” Folz says of the uncertainty around trade.

He still backs the Trump administration’s efforts to negotiate new trade deals because he wants someone to stand up against unfair trade practices and make up for a trade deficit with China.

A recent Farm Journal survey showed a large majority of the country’s farmers still support Trump. Yet many regional farmers are also becoming weary of ongoing trade disputes, with some questioning the Trump administration’s tactics and ultimately whether they’ll support Trump’s reelection.

In northeast Ohio, Ben Klick is just establishing his career in agriculture. The 24-year-old, closed on his first farm this year and grows crops including corn. He said he thinks farmers still trust Trump to follow through with trade deals.

“He’s done a lot for us. More than any recent president has done for a farmer in the past,” Klick said. “As long as he comes through on some of his trade promises, I think he’ll have no problem with our support.”

Klick thinks Trump is making progress on his trade promises to replace NAFTA with a new trade deal, called USMCA. That agreement with Mexico and Canada has not yet been ratified by Congress. But Klick also wishes Trump would be more careful with his words.

“I wish he would just quit saying he was close on something when he’s been saying that so many times now,” Klick said. “I’d rather him just say ‘Be patient, this takes time,’ instead of him saying ‘We’re close on something, we’re close.’ And you get your hopes up, but then nothing happens.”

The latest relief payments are being distributed to most crop farmers by acreage planted, depending on the farmer’s county of residence. U.S. Department of Agriculture officials said they based payments on a calculation of the amount of trade damage that farmers in each county are expected to face. 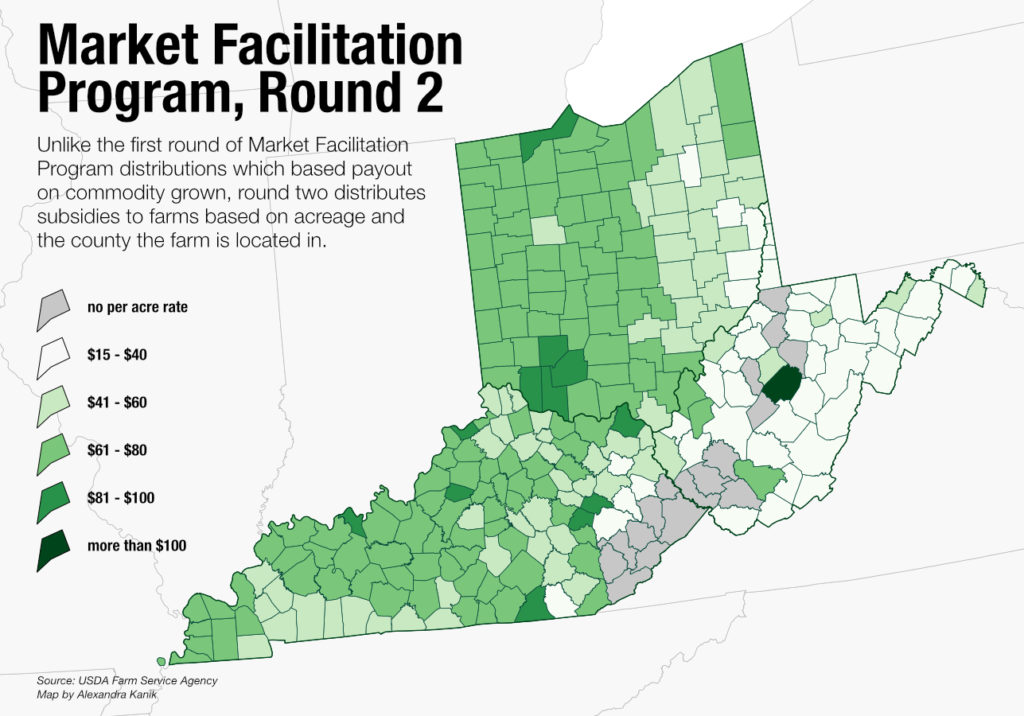 These payments vary widely. In the Ohio Valley, they range from as low as $15 an acre in some counties to as high as $124 an acre in Braxton County, West Virginia.

“I just found out today that I can get $124 dollars an acre for it. And I was floored,” John Meadows said. He’s a Braxton County farmer growing a 20-acre plot of corn, which, he admits, does not make him a major producer.

“It’s not like I have a billboard hanging out that you can fly over and see that says ‘Oh my god, look at that corn!’”

Meadows said he was surprised the relief payment rate was so high for him because there’s little crop production in Braxton County and central Appalachia, compared to other parts of the country. But he said he wasn’t turning down the payment.

Some analyses of the relief program indicate that farmers are being overcompensated.

Researchers at the University of Missouri Food & Agricultural Policy Institute argue in an analysis published in late July that the lost soybean markets from China were partially made up for by exports to other smaller countries. Soybeans prices still saw a modest decline, but not enough of a decline to justify the amount of payments.

Other critics have pointed to several large farms, including one in central Kentucky, which were able to collect in some cases over $1 million in the first round of payments. Ohio Valley farmers received $616,287,779 in payments from the first round of the Market Facilitation Program through the end of April, according to data obtained from a Freedom of Information Act request by the Environmental Working Group, an advocacy group. Three-fourths of that total went to Ohio farmers, and twelve farms in Ohio and Kentucky received at least $500,000.

Davie Stephens, a far west Kentucky soybean farmer and president of the American Soybean Association, said those critiques don’t take into account the financial situation of every farm.

“You may have some farmers think it’s great and some say this isn’t near enough,” Stephens said. “So it goes back to financially how each individual farm is feeling this impact.”

Agricultural economists in the Ohio Valley also agree that the financial situation of farmers can vary. Ben Brown, Ohio State University Assistant Professor of Professional Practice in Agricultural Risk Management, said the payments might be slightly overcompensating, but that some farms still need the support.

“Maybe they’re a little bit higher than what they should have been,” Brown said. “This isn’t a long term solution. I don’t think anybody in agriculture likes waiting to see if the government will make these trade aid payments.”

Brown said he expects there to be future rounds of relief payments to farmers if unresolved trade disputes continue into 2020. 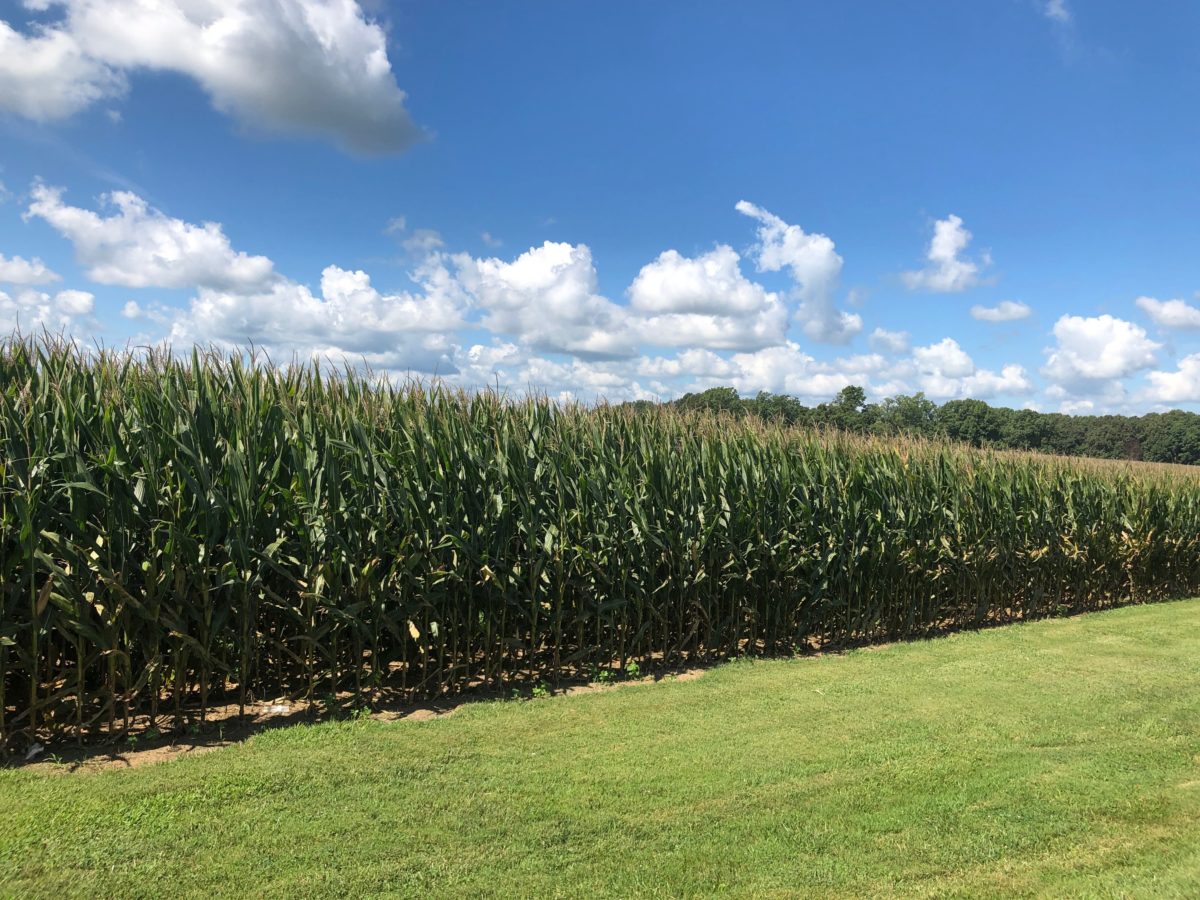 Tom Folz grows thousands of acres of corn and soybean in western KY.

Not all Ohio Valley farmers support the Trump administration’s tactics, even if those trade relief payments do continue.

“They’re frustrated. They don’t see a favorable end in sight,” Logan said. “They still want to give Mr. Trump’s team a chance to succeed in this, but I would say their tolerance for further misery is becoming limited.”

John Meadows, the Braxton County farmer, said he wants politicians in Washington to put aside partisan differences to tackle issues like trade.

“The last several years, we’ve either been in the left ditch or the right ditch,” Meadows said. “We haven’t been going down the road with one or even two wheels on it. We’ve went clear off the road, left or right.”

He voted for Trump in 2016 but is unsure about whether to do so in 2020. He said like other farmers, he wants to see if Trump will ultimately follow through on his trade promises.