Food Service And Farming Jobs Provide A Path Out Of Addiction

Located in South Charleston, West Virginia, the former church turned restaurant has a funky, yet calming vibe. Twinkle lights and mismatched dining room sets dot the space. For $8 to $10 a plate, diners can enjoy a locally-sourced meal. The menu today is apple sage pork tips, spiralized zucchini (or “zoodles”), roasted broccoli, and a salad of spinach grown just a few miles away. 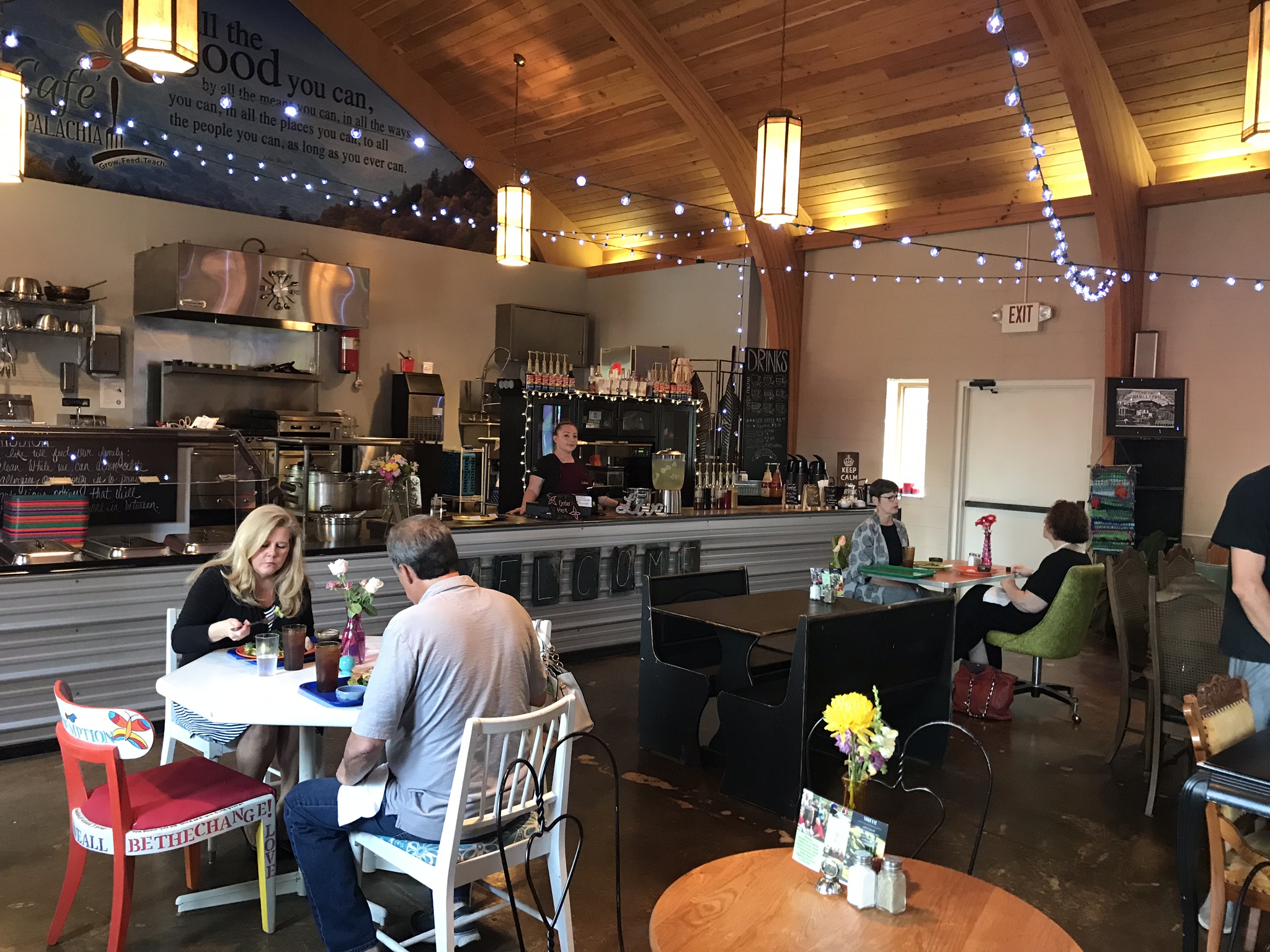 Autumn McCraw inside Cafe Appalachia, which provides jobs and training to those in recovery and serves local food produced nearby.

“I start my tasks as the barista here and making coffee, make sure the tea’s prepared. I also try my best to make the desserts,” she says. “It’s something that I really like to do.”

But this cafe is more than just a job. It’s a second chance. McCraw heard about Cafe Appalachia while participating in long-term addiction recovery treatment.

“As addicts in society we’re shunned,” she says. “To know that the community is supporting me and having my back is such an essential part of my recovery.”

Almost everyone who works at Cafe Appalachia is in recovery and McCraw says being part of a team that understands what that means and can support her has been a game-changer.

“If I’m struggling, if it happens to be one of those days, you know, I have a whole support system here that understands,” she said. 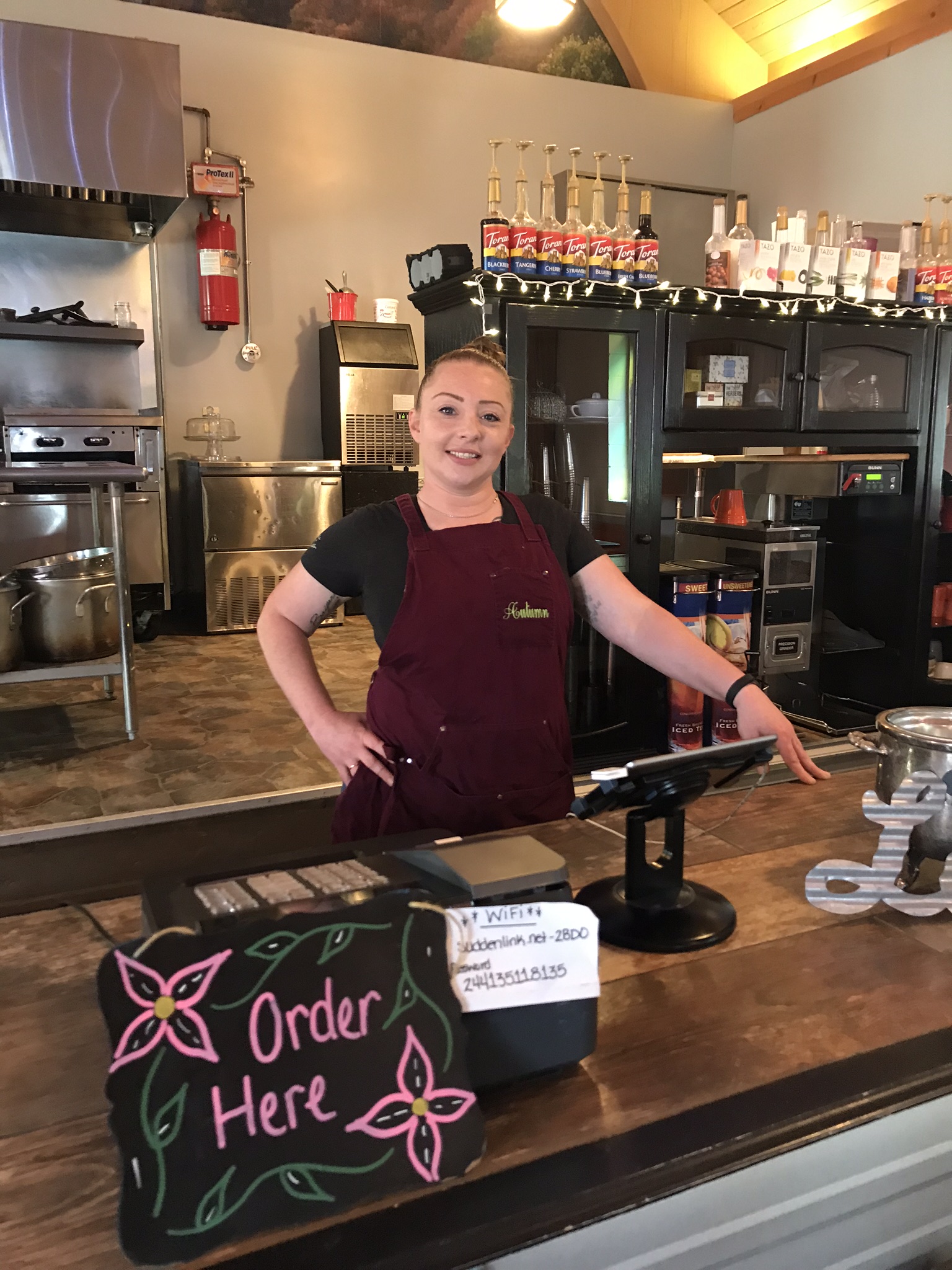 Autumn McCraw has been working at Cafe Appalachia for about four months. She is lead barista and helps with the desserts.

Cafe Appalachia is just one example of a growing effort around the Ohio Valley that puts people in recovery in food service and agriculture jobs. In a region with some of the highest overdose death and addiction rates in the country, people are looking to programs like these as a way to both nurture recovery and provide more nutritious food to communities.

The cafe is part of a larger program that aims to use agriculture to create jobs for those in recovery and coming out of prison called the Appalachian Food Enterprise, or AFE. Last October, the AFE received a $760,000 federal grant from the Department of Health and Human Services’ Office of Community Services.

The AFE comprises the cafe and an urban farm located just a few miles away.

“Welcome to Paradise Farms,” Reggie Jones greets visitors to a greenhouse as ventilation fans whir above beds of greens.

“The idea of the enterprise as a whole is that we want to be able to take a seed, put it in the ground, grow it, harvest it, process it, and get it out to the social enterprises, like the cafe, like the catering business, like the like the food truck, and create training opportunities and jobs along that entire continuum,” Jones said. He’s CEO of the Kanawha Institute for Social Research and Action, or KISRA, which is a project partner. 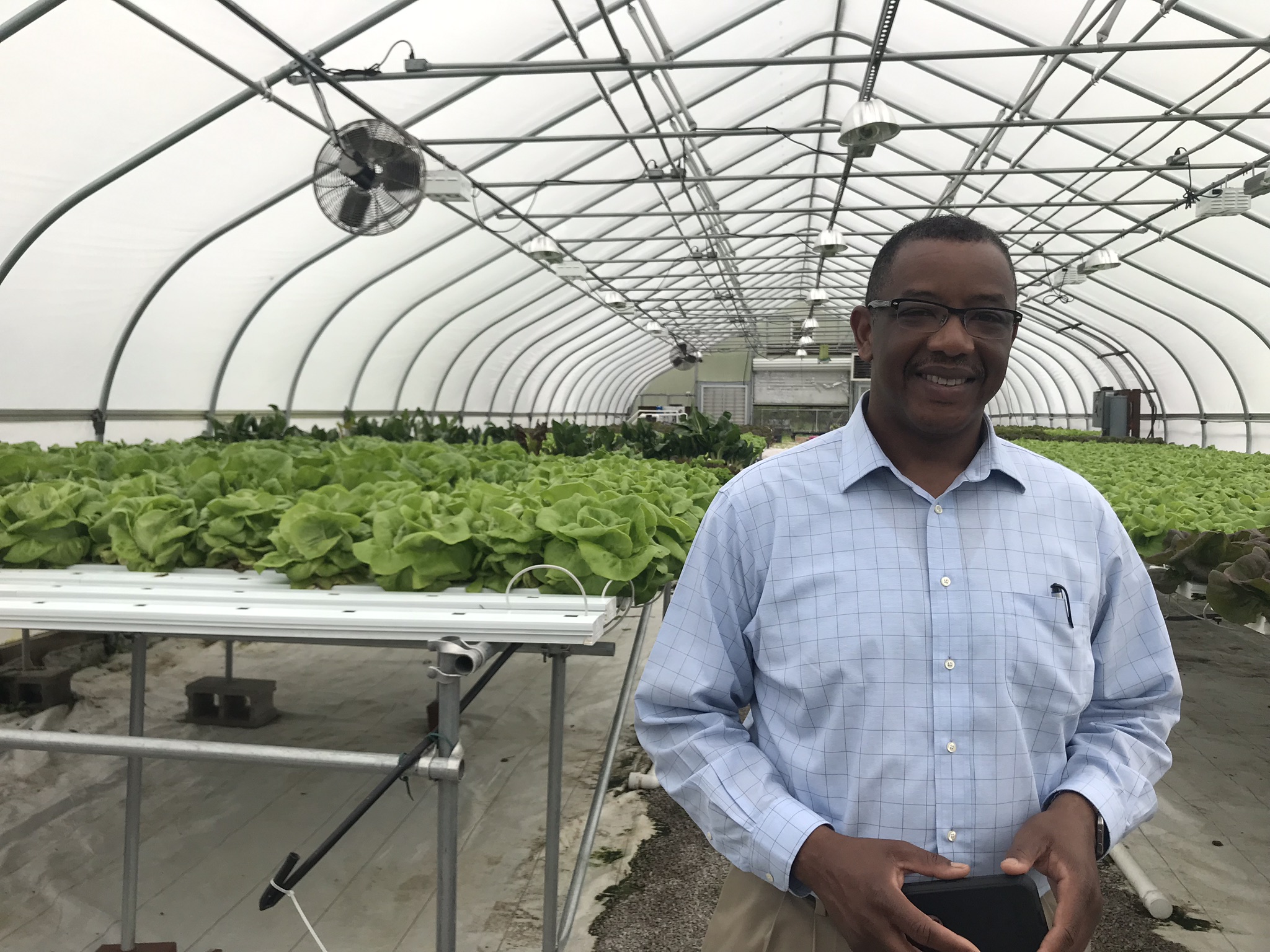 Reggie Jones CEO of the Kanawha Institute for Social Research and Action stands inside one of the greenhouses at Paradise Farms in Dunbar, West Virginia.

The women in recovery participating in the program begin their training at KISRA’s Paradise Farms. They learn about farming and working in the food service industry both in the classroom and in the two hydroponic greenhouses.

Then they can move to working at the cafe and, soon, a food truck and catering service. Jones said the project aims to not only create 42 jobs for those in recovery or coming out of prison over the grant’s three-year life cycle, but to use the cafe and other food businesses as social enterprises to provide training and empowerment for those who may struggle to find employment.

Farming and food service is traditionally more flexible than other sectors, and the program hopes to capitalize on that.

Jones believes jobs in food and agriculture provide more flexibility for people in recovery that might need to schedule out appointments for services like therapy.

For Cheryl Laws, CEO and founder of Pollen8, another AFE project partner, the initiative has the power the transform more than just the lives of the participants they work with, it can be a model.

Laws said local food and agriculture is something that she thinks has economic staying power, and she isn’t the only person in the Ohio Valley who believes that.

DV8 Kitchen, situated along one of the main thoroughfares of Lexington, Kentucky, started serving breakfast and lunch fare more than a year-and-a-half ago.

The restaurant would seem inconspicuous among the chain fast food joints that surround it, if it wasn’t for a mural, depicting vibrant, phoenix-like wings on the nearby wall. Almost all employees working inside are currently recovering from some form of addiction.

“When we’re trying to make the best bread, the best sandwich, the best salad that we can possibly make, it is so therapeutic to serve someone,” DV8 Kitchen co-founder and operator Rob Perez said.

Perez and his wife, Diane, started DV8 Kitchen after seeing 15 employees from their former restaurants die from addiction over the past dozen years. Perez also has personal experience with addiction, suffering from alcoholism in his restaurant career. He’s been in recovery for 28 years. 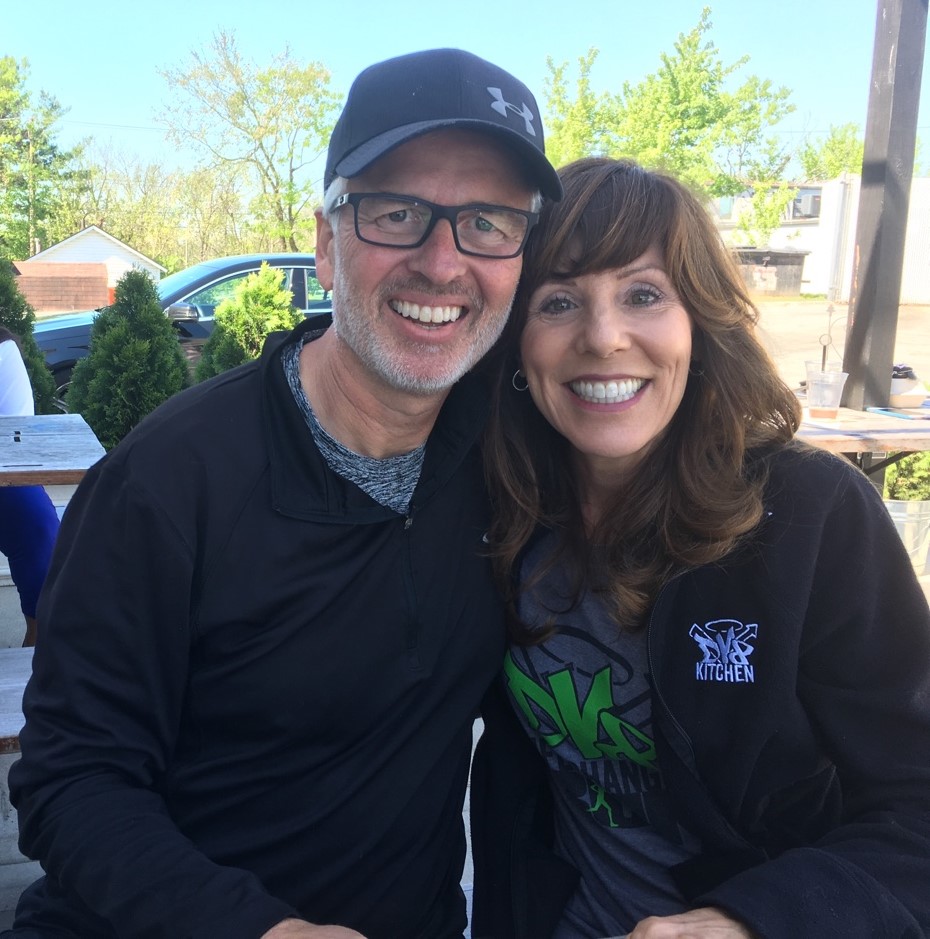 Rob and Diane Perez are the founders of DV8 Kitchen in Lexington, Kentucky.

A 2015 report from the Substance Abuse and Mental Health Services Administration showed the food and accommodations industry had the highest rate of illicit drug use and substance use disorders by occupation.

They believe the bonding power of making and serving food can help create a restaurant culture that’s focused on recovery. But DV8 Kitchen goes beyond just food in creating that.

Employees are required to be in sober living housing to work at the restaurant. The kitchen closes in the early afternoon to let employees attend therapy appointments. And locals, including therapists, yoga instructors, police officers and more come in every Tuesday to lead the employees in talks and activities.

“That, I think, has been super important. And to let them know that it’s not just us giving them a job. It’s the whole community rallying around them,” Diane said.

But it took time for the community to be there. Diane and Rob struggled for months to get customers because of the stigma that people in recovery as employees would mean bad service or even a threat to one’s safety.

“When they heard ‘second-chance’ restaurant, they heard ‘second rate,’” Rob said. “We are trying to offer 23 people jobs in a second-chance environment. But really, [the employees’] job is to try to make the 300 customers we have each day, help them figure out how to think differently about people in recovery serving them.”

And experts in the Ohio Valley who coordinate employment opportunities for those in recovery say that stigma is a common issue among businesses hiring people recovering from addiction.

Zandia Lawson is a peer support administrator with the Ohio Department of Mental Health and Addiction Services. Lawson said when businesses look past that stigma, employment can be a boon for those who are recovering.

“Often times when you’re in a social situation, the first thing a person asks you is what do you do. Work is a huge identifier in our society,” Lawson said. “It helps people with their self-esteem, their self-confidence. Employment is what typical people do on a typical day.”

And while hiring recovering individuals is a worthy cause, Lawson emphasizes these initiatives still need to be sustainable. Many of these grassroots initiatives are grant-funded, and that funding doesn’t last forever. 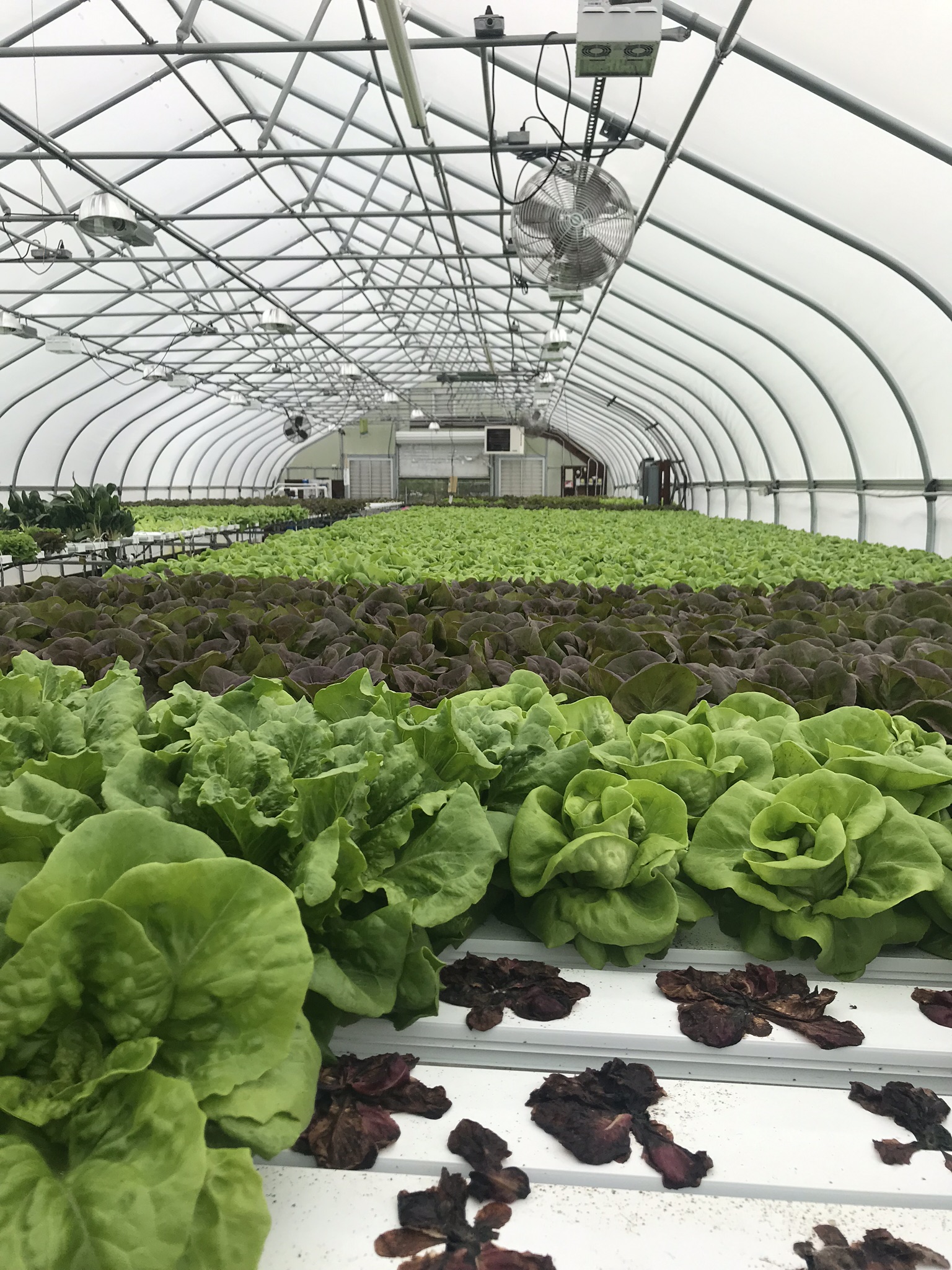 A hydroponic greenhouse at Paradise Farms in Dunbar, West Virginia.

“Whether it’s agriculture, a cleaning business, a lawn care business or what have you, the business rules still apply in that you have to have a need or demand for the service or the product that is being provided,” Lawson said.

And that’s why leaders of these grassroots efforts believe in food and agriculture — because of what they see as its potential for sustainability.

“You can’t grow a pepper and someone say ‘that’s a waste,’” Jeannie Harrison said with a laugh. “Because food is fundamental. And I think that it’s one of those great uniting things about just being a human.” Harrison is founder of Gro Huntington, a nonprofit that runs an urban farm in Huntington, West Virginia, managed by recovering individuals from local treatment centers.

The organization got its start in 2016 through a successful crowdfunding campaign and has supplied local food to farmers’ markets and restaurants the past few years.

Her nonprofit gives steady employment to people in recovery, but she said the urban farm also provides nutritious, high-quality produce for a community that was once considered the unhealthiest city in the country.

“We called it a ‘food desert farm stand,’ because we were in the middle of a food desert. Which means if you were a neighbor to the Gro farm, you did not have access to fresh food if you didn’t have a car,” Harrison said.

Yet Harrison says she’s cognizant that financial stability can be fleeting, as she continues now to apply for grants through philanthropic organizations. She’s also planning on turning the urban farm into a fruit orchard, as she says it’ll be easier to financially sustain while also still providing local food.

Harrison said community buy-in is critical for these grassroots efforts to support themselves in the long term, and she hopes a recent partnership with Marshall University to start a composting program will be a boost to Gro Huntington.

Harrison, and several others, believe the payoff of recovery, through a foundation of food, is worth it.

“Fresh local food and work for people that may not be able to find it as easily? Absolutely. That is a powerful, powerful way to create change,” Harrison said.

This is the first story in an occasional series exploring the links between addiction recovery and a recovering economy.