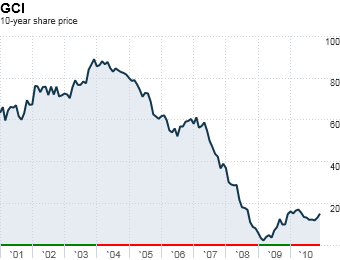 CNN Money has listed the worst-performing Fortune 500 stocks for the last decade. The top spots went to Fannie Mae, Freddie Mac, investment banks and other companies that are blamed for leading into the recession. At the end of the list, though, at number 18, is media giant Gannett, a victim of the recession.

The annualized return for the last ten years for a Gannett investor was -11%.

Here’s your headline: Newspapers Fall Hard, Fast. As late as 2004, shares of Gannett, the country’s largest newspaper publisher and owner of USA Today, traded for $80. Now the stock’s at $15.

Gannett has struggled this decade to replace lost revenues from local classifieds ads and other advertising. Newspapers comprise nearly three-quarters of its sales. As ad spending steadily shifts online, Gannett has slashed newsroom jobs and other costs.

Meanwhile, USA Today has lost its crown as the country’s largest paper. Worse for shareholders: The trends plaguing the stock don’t show any signs of changing.

Many newspapers have not done well over the last decade as readers and advertisers have gone elsewhere (the internet!), but the USA Today‘s chief competitor, the Wall Street Journal, has done relatively well. Here’s a 2009 chart on circulation. It excludes the USA Today, but you can track those numbers here.

Fifth Third was a Wall Street favorite in the ’90s, a growing Midwest bank with a solid balance sheet. But after lots of acquisitions, executives neglected the bank’s infrastructure, and in time the bank became too decentralized to properly manage.

Problems culminated during the credit crisis when Fifth Third posted huge loan losses across its primary markets in Ohio, Michigan, and Florida.

One prominent analyst recently called Fifth Third a takeover target, but for now the stock continues to languish.

In eastern Ky., school is on hold after flooding