With just a little more than a week before Election Day and with a challenge to the health care law coming before the high court, health care is on both the ballot and the docket. And for the Ohio Valley — a region with some of the nation’s worst health outcomes — the stakes are high.

“I mean people would lose their lives as a result of it,” said Ben Chandler, CEO of the Foundation for a Healthy Kentucky, a nonpartisan research and advocacy group. “I’m personally familiar with a number of people here, right here in Kentucky, who would not be alive today but for the Affordable Care Act.”

One week after the presidential election, the Supreme Court will hear arguments for California v. Texas — a lawsuit led by 21 states suing 18 additional states that attempted to overturn the Affordable Care Act in a lower court.

Over the last decade, at least 20 million people in the U.S have acquired access to health insurance. The Affordable Care Act, often called Obamacare, laid out rules insurance companies had to abide by and a host of new protections for consumers. 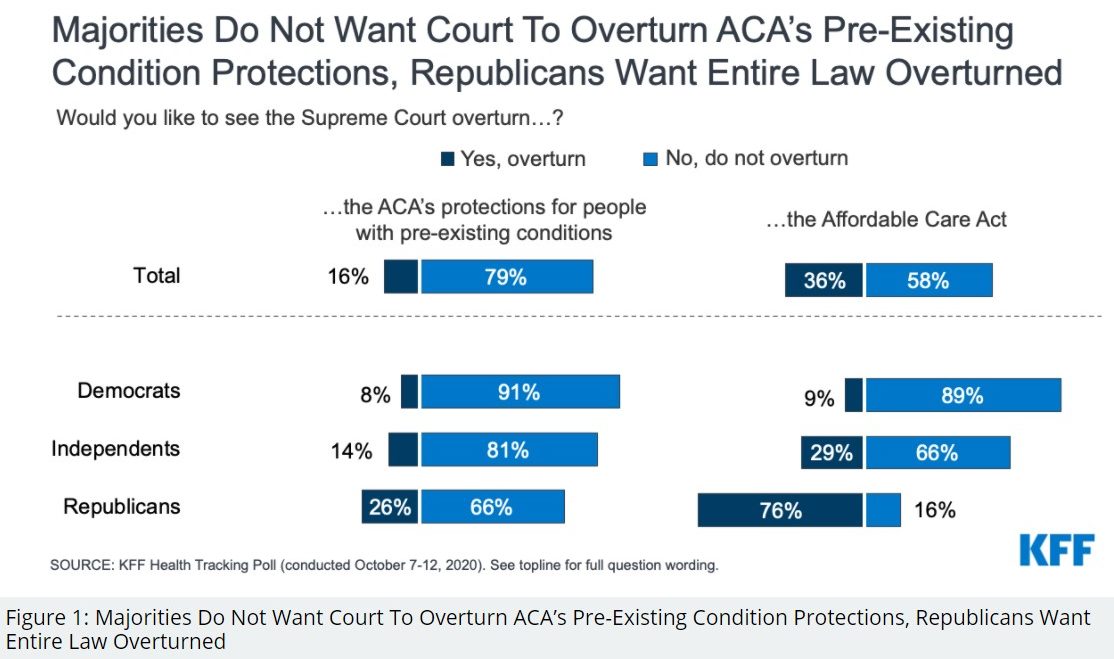 After its passage, people with pre-existing conditions could no longer be denied insurance. The ACA reduced out-of-pocket maximums and guaranteed maternity care. A majority of states expanded Medicaid, including Kentucky, Ohio and West Virginia, which gave more than 1.3 million residents in the Ohio Valley access to health care — some of the greatest improvements in health care access in the country.

Although a decision isn’t expected until 2021, if the law is suddenly overturned, millions would lose health insurance. That would cause massive disruptions to health care access, especially in the Ohio Valley, as the country grapples with the coronavirus pandemic.

States that expanded Medicaid saw a significant decline in uninsured rates from 2010 to 2015, according to an Urban Institute report. West Virginia’s uninsured rate was reduced by 58.6%, the greatest improvement of any state in the country. Kentucky improved by 57.1%; and Ohio by 44.7%.

Julie DiRossi-King, Chief Operating Officer of the Ohio Association of Community Health Centers, said one of the organization’s goals is to make sure every Ohioan, regardless of insurance status, has access to primary care.

“When more of our patients have coverage, that brings more operating revenue into the health center to reinvest, to expand access and further our mission,” DiRossi-King said. “We do get federal funding from the federal government to help offset the cost of providing care to the uninsured.”

Medicaid recipients make up more than half of the patients that seek care at community health centers in Ohio. If the health care law is struck down, many enrolled in Medicaid would lose health insurance.

“Pre-COVID we saw the evidence that Medicaid expansion was working as it was intended. It’s getting people through a tough time in their lives when they have a gap in health care coverage,” DiRossi-King said.

The Foundation for a Healthy Kentucky advocates for policies that aim to improve health care access, health disparities and inequities. CEO Ben Chandler said there would be a number of consequences for Kentucky if the law is overturned.

“Number one is that the expansion of Medicaid would go away, which means that a half-million or so people here in Kentucky would lose their health coverage, and that would not help the overall health of Kentucky,” Chandler said.

Without the ACA, Chandler said Kentucky hospitals and doctors would lose funding.

“I think you’d see a lot of small rural hospitals go out of business if the Affordable Care Act went away,” he said. “You just had a lot of trouble across the board here in Kentucky if that happened.”

Simon Haeder, a professor of public policy at Penn State University, published research showing that 718,942 people below the age of 64 in West Virginia have pre-existing conditions. West Virginians covered by Medicaid would suffer without certain provisions found in the ACA.

“Coal miners, they had a hard time, when they got black lung, to claim benefits,” Haeder said. “There’s a line in the ACA, it’s just a single line that changes everything and makes it much, much easier for them and their families to claim benefits for black lung.”

The health care law first landed before the Supreme Court in 2012. The court ruled the individual mandate was a tax making the law valid. Prior to 2019, the fee for not purchasing insurance was as much as $695 per person or 2.5% of household income and $347.50 for anyone under 18.

But that penalty was quashed when Congress passed the Tax Cuts and Jobs Act in 2017.

In 2018, 20 states — including West Virginia — sued the federal government over the law’s individual mandate. In what a Kaiser Family Foundation article called an “unusual” move, the federal government agreed with plaintiff states. After courts permitted states to defend the ACA, a total of 21 states are challenging the original plaintiff states in California v. Texas.

Haeder said it’s likely the Supreme Court will rule the individual mandate unconstitutional, but uphold the rest of the law.

“Congress had a chance in 2017, when they undid the penalty payment, to change the rest of the law. It did not,” Haeder said. “The will of Congress clearly says the rest should stand. We’ve seen that the ACA is functioning without the individual mandate.”

During Barrett’s hearing Democratic Senators introduced constituents with pre-existing conditions who would no longer be covered if the law is repealed. Republicans argued that policy isn’t decided by the court.

President Trump has promised to replace the ACA since his 2016 campaign, so have Republicans in Congress, but neither the party nor the president have delivered a plan.

Recently, President Trump issued an executive order that details actions he’s taken against the health care law. The order promises “to ensure that Americans with pre-existing conditions can obtain the insurance of their choice at affordable rates.”

But Haeder said the order can’t be enforced. “That’s not a legal statement,” he said. “There’s no enforcement powers. There’s no way to implement it. There’s no money behind it. It just says ‘I want to protect people with pre-existing conditions.’”

Few people would be shielded from the effects of a repeal. Haeder says premiums might go down initially. But without the ACA copays and out-of-pocket costs for things like vaccines and contraceptives, those costs would likely go up again.

So-called alternative, cheaper health care plans that have been marketed as “Trumpcare” were recently the subject of a Propublica investigation. Reporters found that many plans are merely supplemental insurance and don’t have to meet ACA coverage requirements. Marketers make commission when they sell these “limited plans.” They have also deceived consumers — who are directed to the cheaper plans via Facebook and Google ads — about what the plans will cover.

Already massive job losses from the pandemic have resulted in thousands of people losing their health insurance. “Why is it that hundreds of thousands of people lose their health care at a time when they need it most, when we’ve got a pandemic upon us, just because they’ve lost their jobs?” Chandler said. “It’s unfair, it’s nonsensical, but it’s the way our system has developed over a period of time.”

Chandler said even more jobs would be lost if the ACA falls without a replacement plan.