Farmers throughout the Ohio Valley want to revive a crop that was once a staple in the region: hemp. After a ban that lasted more than half a century, the 2014 Farm Bill allowed states to grow hemp in research programs. Growers and processors in Kentucky are aggressively putting that research program to work in hopes of winning a share of the booming market for hemp products.

Hemp cooking oil, nutritional supplements, and more line the back wall of a supermarket in Lexington where cashier Emily King rang up a customer’s purchase.

Last year U.S. consumers spent almost $600 million on hemp-based products. Remarkably, American farmers produced almost none of the key ingredient for these items. Hemp must be imported because the U.S. government treats the plant as a Schedule 1 controlled substance — the same category as hemp’s intoxicating cousin, marijuana. 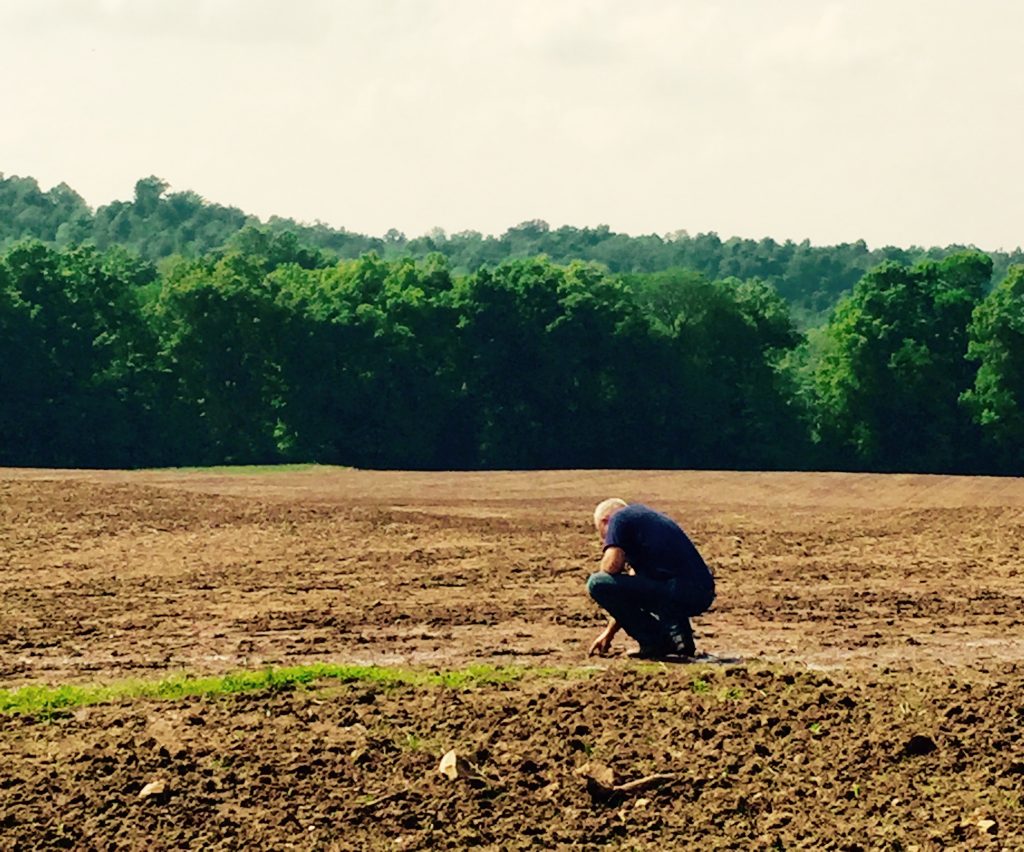 A bipartisan bill before Congress could change that. Co-sponsored by Republican Senators Mitch McConnell and Rand Paul of Kentucky and Democratic Senators Ron Wyden of Oregon and Al Franken of Minnesota, the Industrial Hemp Farming Act would amend provisions to the 2014 Farm Bill to allow hemp to be grown for industrial purposes beyond the current strictly enforced research pilot programs.

“We’ve learned from Kentucky’s farmers that one way to keep our state’s agricultural sector growing is to explore new, viable cash crops for the state,” McConnell and Paul wrote in a column. “This is why we’ve put our support behind expanding industrial hemp research.”

Kendall Clark, a lifelong farmer in Christian County, Kentucky, said the government’s treatment of hemp is at odds with the plant’s biology.

“You know, industrial hemp, you are making a product that is non-hallucinogenic. It has no psychoactive capabilities whatsoever. Quite frankly it should be the same as coffee,” Clark said.

Clark’s interest lies mostly in finding a viable crop that doesn’t compete with farmers already struggling in what he says is a saturated market. He pointed out that history shows that hemp is a crop that worked here before. Kentucky was once a leading hemp producer thanks in part to his own family.

“My father and grandfather used to grow hemp in the 40’s but they grew it for the Navy to make rope with,” Clark said. “Now we are looking at the nutraceutical and oil seeds and fiber. Right now I guess you would consider it a niche market, but that niche is going to grow, I think, because we hear too many good results from it.” 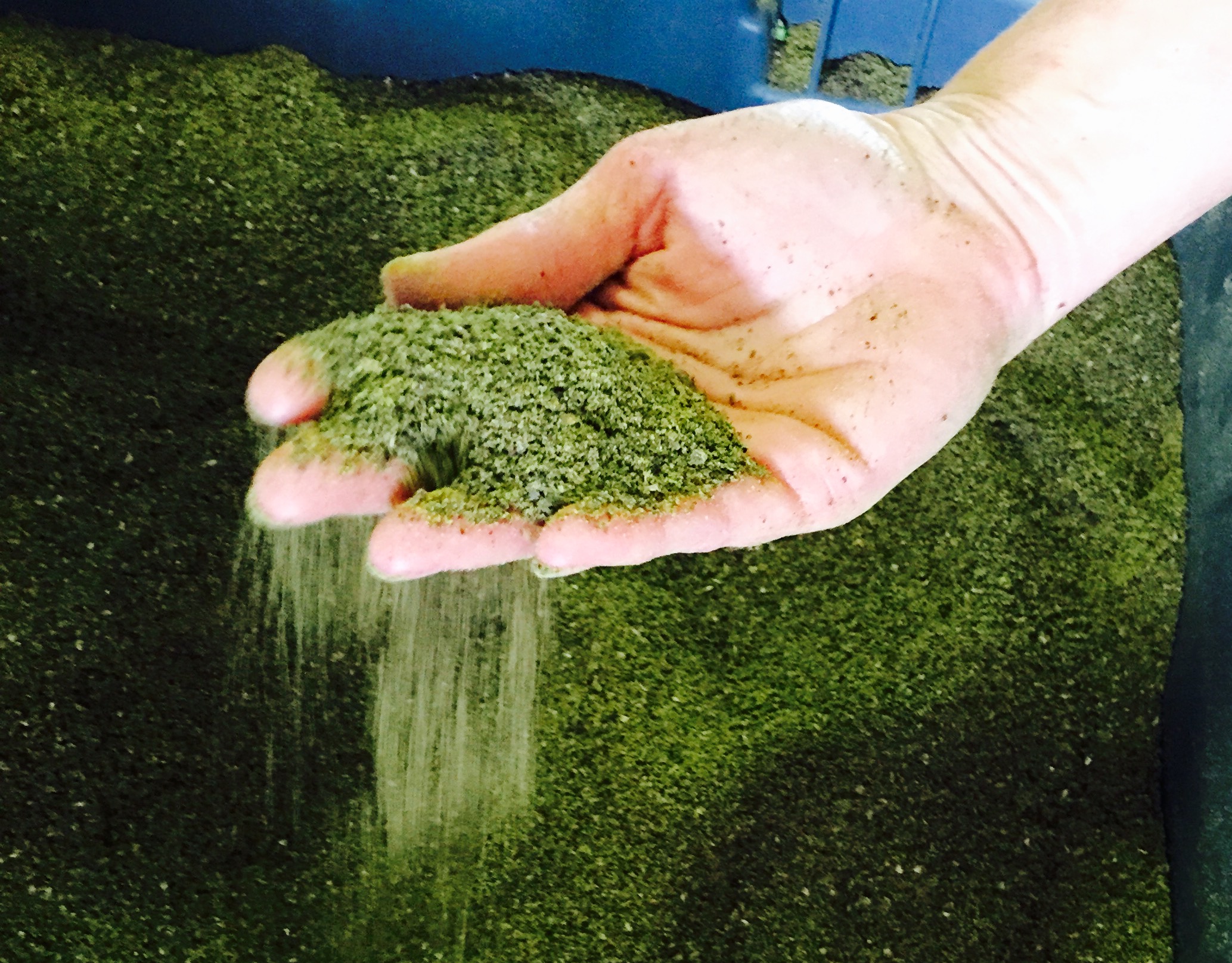 Protein powder derived from hemp is a popular ingredient in many consumer products.

Clark is betting big on hemp by investing early. But because the plant is still a controlled substance it’s tough to get financial support from banks or the U.S. Department of Agriculture.

FNB Bank Chief Operating Officer Sally Hopkins said the financing of a hemp production operation would be challenging for any bank due to the uncertainties surrounding the crop.

“There are many unanswered questions that have not been addressed by bank regulators and lawmakers and that makes it difficult to finance hemp production at this time,” Hopkins said. 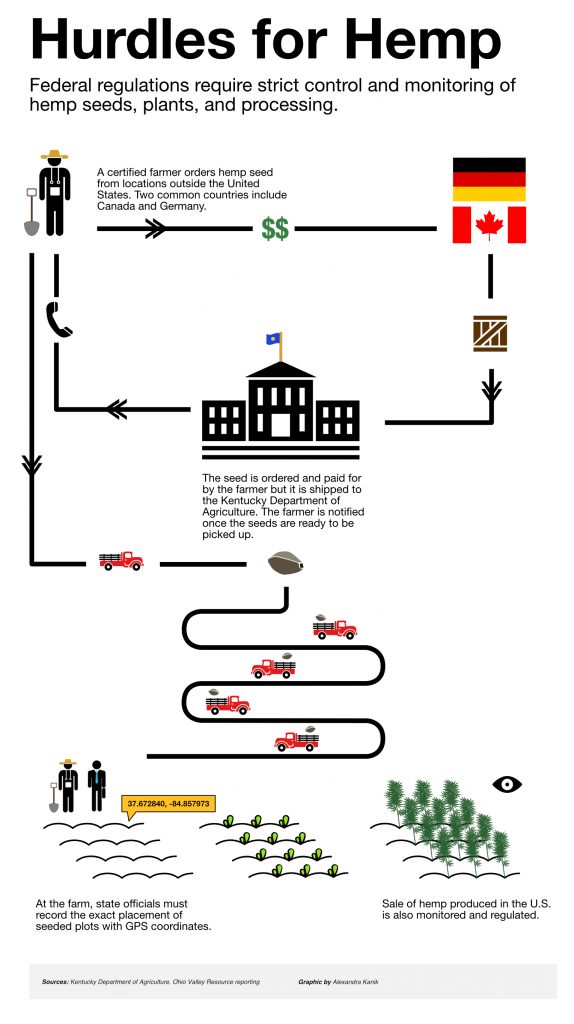 “You put a lot of green material in that grain tank with the seed,” Clark explained. “I’m sitting here thinking, ‘Well how are we going to get that out?’”

Ordinarily, he’d pay a company with the necessary equipment to do that sort of work. But that’s not possible with hemp.

“It’s illegal! You can’t take it up to local companies that handle seed because if they touch it they are in violation of umpteen different laws,” Clark said. He had to buy a separate combine and a seed cleaning machine for his hemp.

Clark is able to handle hemp material because he has a special arrangement with the Kentucky Department of Agriculture, or KDA. Kentucky has been more aggressive than most other states when it comes to how it defines a hemp research program. The KDA allows private growers to participate through agreements that effectively make growers agents of the department.

Katie Moyer is the first hemp processor in the state and is Clark’s business partner. She said that even that special agreement with the state does not guarantee a hassle-free process.

“We had permission but then the DEA still seized 130 kilos of seed in Louisville,” Moyer said.

The Drug Enforcement Agency argued that the state’s approach to  private growers compromised enforcement. The state fought back in court and won. But now the state agency is responsible for keeping track of the grower’s seeds — every single one. 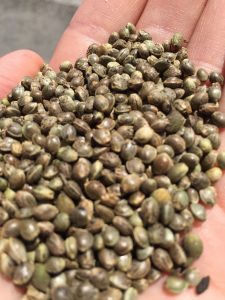 Hemp seeds must be imported and closely monitored.

As seed shipments arrive from abroad, Kentucky Department of Agriculture official Brent Burchett is there to see them documented.

“We are authorized to import them, we have already shared the addresses where that seed is destined to be planted,” Burchett explained. “We document the amount of seed to make sure the recipients have gone through background checks. We authorize all that.”

The KDA began its pilot program with 14 growers in 2014. This year it has 137 growers. The market has grown from just 7 states to now 29 states that have approved similar research programs, including most of central Appalachia.

In 1943 the U.S. had 143,000 acres of industrial hemp in production for the war effort, to make rope and sails and other kinds of cordage. Kentucky farmers first grew hemp in 1775. The state went on to lead the nation in hemp production in the mid-19th century, producing 40,000 tons in 1850. 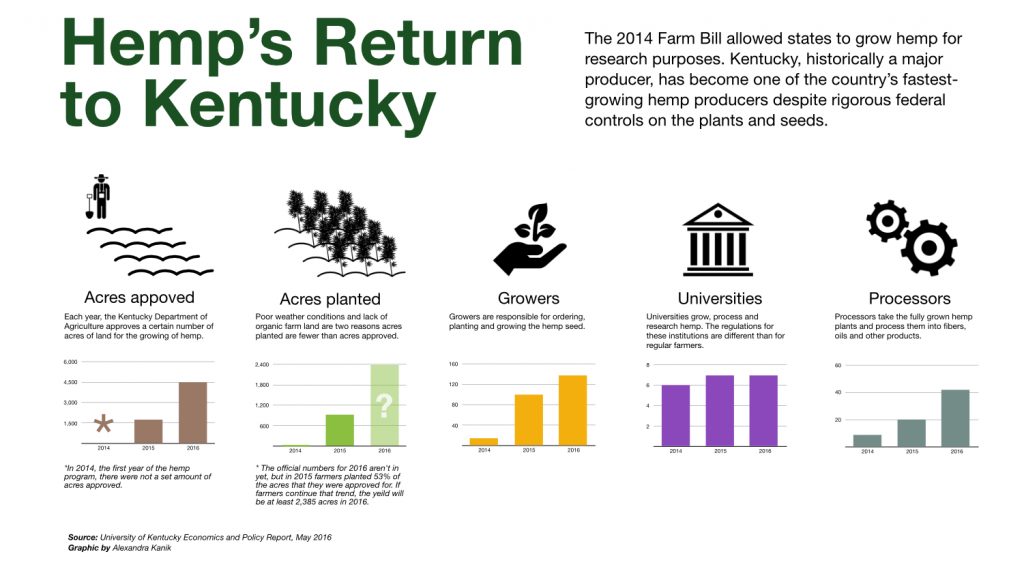 “I have spoken to both cotton and tobacco farmers, they are very excited to introduce a crop that is more sustainable. It doesn’t require as much water or pesticides and herbicides,” Paiss said. “It’s just frustrating that we are having to claw our way back. So the research questions are somewhat of a misnomer because we are testing a product that we already know works.”

University of Kentucky Agriculture Economist Will Snell said the research component is critical if U.S. crops are to catch up with an already established international market. 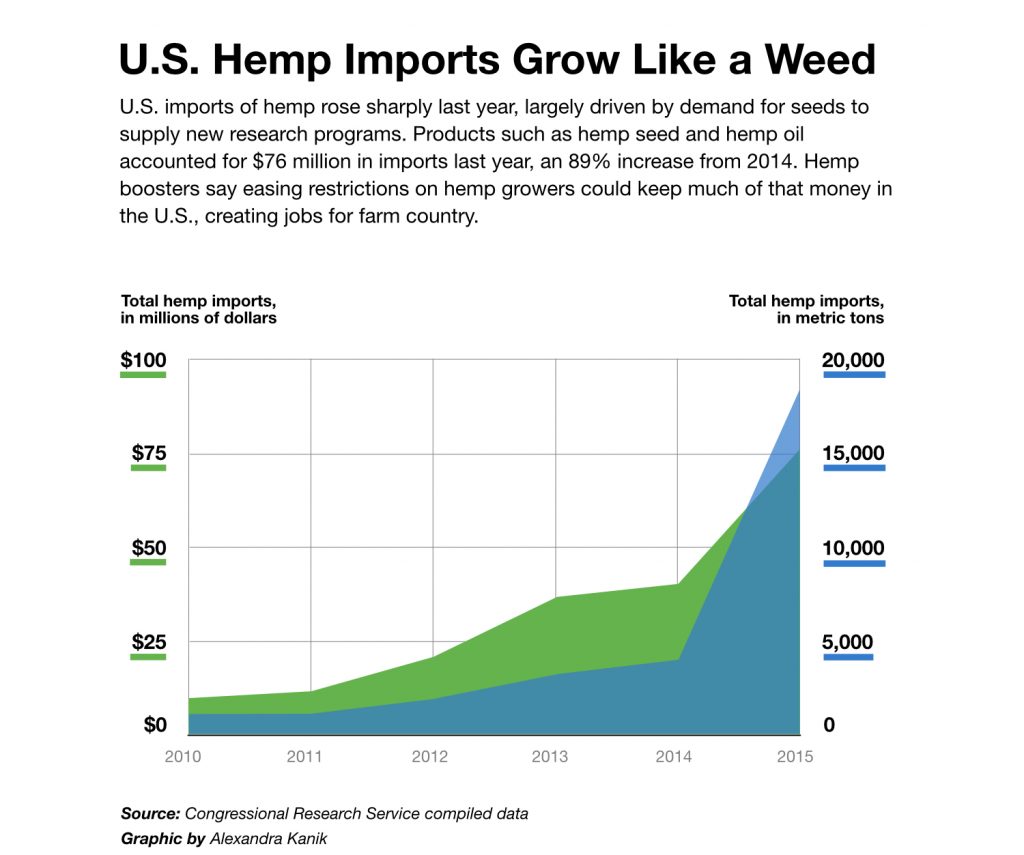 “There is no doubt that we’ve had a long history of growing the crop,” Snell said. “But we are looking at different crops today. We need more research on the varieties and how they suit certain products out there, we need obviously some research on what equipment use and what inputs and how it will compete favorably.”

Snell said Kentucky’s aggressive, early gamble with the pilot programs could pay off.

“I think the states that have gotten out front with their research programs will have been able to attract processors and develop the infrastructure. I don’t think these processors are going to invest in infrastructure in every one of these 30 states,” he said.

Kentucky is attracting companies like CV Sciences, which has been working with nutraceuticals made from hemp oil for years. The company relies on contracts with farmers in Germany for its supply.

The company’s Director of Business Development for Domestic Production, Josh Hendrix, said CV will not be renewing 3,000 acres of hemp contracts abroad because they want to invest instead in Kentucky. International clothing company Patagonia has also donated seed to Kentucky farmers to lessen import dependency. 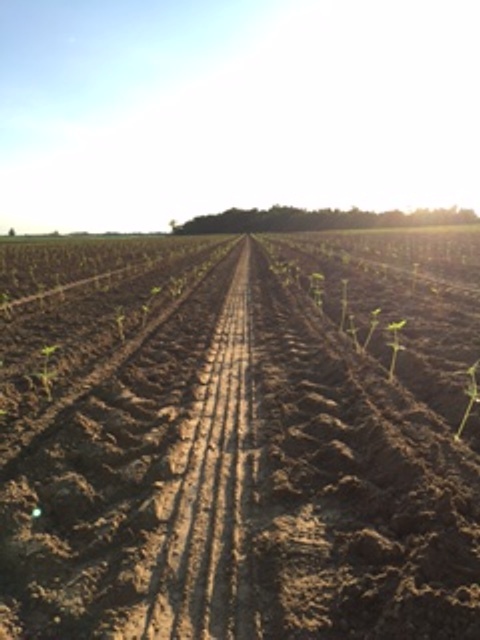 Hendrix said the key in producing more seed domestically is to lower the price of production.

“We’ve got to have a variety that will grow well outdoors and it has to have minimal input, because we aren’t growing marijuana we are growing hemp. We want it to be a commodity like corn,” Hendrix said.

But it’s hard to make a commodity crop from a plant the government treats as a criminal. Growers face a host of challenges in both the economic and regulatory areas, affecting access to credit, markets, and basic equipment and services.

Hemp proponents plan a symbolic statement this summer to try to get lawmakers to address the uncertainties around the crop. A group of nonprofits will deliver a petition urging Congress to pass the Industrial Hemp Farming Act, legalizing the cultivation of hemp in the U.S.

Along with the petition will be an American flag made of industrial hemp grown in Kentucky by U.S. military veterans — a reminder that the one Betsy Ross sewed was also made from hemp.

Note: This story was updated on June 28, 2016, to make the following changes: to clarify requirements for GPS tracking of seeds; and to indicate that hemp proponents have postponed the delivery of their petition from July 4th to a later date to be determined.