Russian aluminum company Rusal announced Monday it plans to invest in a new Kentucky aluminum mill to be built near Ashland in eastern Kentucky. The $200 million investment in Braidy Industries is Rusal’s first U.S. project since the Trump administration lifted U.S. sanctions placed against the company.

Rusal had been sanctioned by the U.S. government because its major controller, Russian oligarch Oleg Deripaska, who has close ties to Russian President Vladimir Putin, faces accusations of “a range of malign activity around the globe” by Russia, according to the U.S. Treasury Department. Those actions include interference in the 2016 U.S. presidential election and meddling in neighboring Ukraine.

Deripaska also has close business ties to former Trump campaign chair Paul Manafort, who has been convicted of tax evasion and money laundering. Deripaska is suing the U.S. to have sanctions against him removed.

The Trump administration released Rusal from sanctions in January after the company reduced the ownership stake held by Deripaska. Congressional Democrats attempted to block the White House decision and passed legislation in the House that would keep sanctions in place. However, the bill fell short in the Republican-controlled Senate, where Majority Leader Mitch McConnell of Kentucky accused Democrats of trying to “politicize” the sanctions. 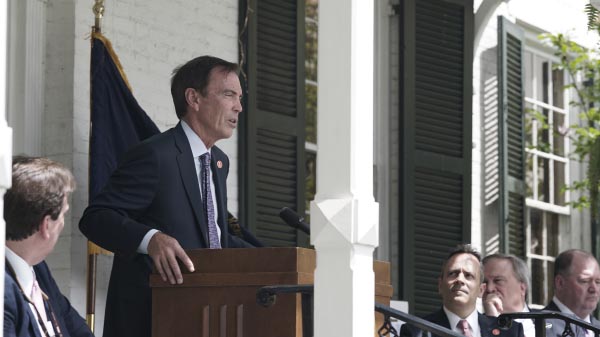 According to a press release, RUSAL will earn a 40 percent share in the factory’s profits, and Braidy will keep the remaining 60 percent. The plant has also received $15 million in direct investment from the state of Kentucky. Gov. Matt Bevin cut a deal to attract Braidy to the state with that public money and additional tax incentives totaling more than $10 million.

As part of his reelection bid, Bevin has pointed to the Braidy development as evidence of job creation in an economically struggling part of the state.

“This is a seed that has been in the ground, the germination so often seems invisible to people,” Bevin said at an event over the weekend in Martin County, Kentucky. “But good things have been happening.”

The project is expected to cost more than $1 billion and employ over 500 people.

The Ashland project will produce rolled aluminum for the American auto and aircraft markets, and is the type of project President Donald Trump hoped to support with his tariffs on aluminum imports.

“We’re really lucky and honored to have them as our partner in Kentucky,” Bouchard said of Rusal, adding that his company had chosen to partner with Rusal for its record of environmentalism.

“We are going to lead the world in highest quality, lowest cost, and the least use of carbon from start to finish in the manufacturing process, and we’re changing the world,” he said.

The Ashland aluminum mill would be the first such plant to be built in the U.S. in 37 years, according to industry sources. Final agreements among the partners are expected to be signed later this year.