When battery manufacturer EnerBlu announced it would suspend plans for a new factory in Pikeville, Kentucky, the company used an intriguing phrase. “Unexpected geopolitical factors,” the company said, had soured the deal.

According to a former executive at the company, those factors tied the rural eastern Kentucky development project to one of the world’s largest companies, the Saudi Arabian royal family, and the international uproar resulting from the murder of a prominent journalist.

Since it announced in 2017 its plan to build a $372 million manufacturing plant and bring as many as 875 jobs to the struggling region, EnerBlu was hailed as a savior for Pike County and eastern Kentucky. Gov. Matt Bevin called the project “truly transformative.”

An image from an EnerBlu promotional video.

The project quickly encountered challenges with land quality on the reclaimed surface mine site where it planned to construct a facility, but former EnerBlu CEO Daniel Elliott said he remained committed to building in the region. “We would have been able to work through those issues,” he said in an interview with the Ohio Valley ReSource.

In the end, though, land quality was not the final straw. Instead, a cascade of events beginning a continent away appears to have doomed the project.

Daniel J. Elliott began working in renewable energy in 1991, when he joined Ford Motor Company’s electric vehicle program. At another electric vehicle startup, Phoenix Motorcars, Elliott raised millions to support not just the cars themselves, but the technology infrastructure needed to support widespread use of renewable energy in transportation.

Elliott co-founded EnerBlu in 2015 and stepped down from his role as CEO as the company announced the suspension of its Kentucky plans on Feb. 5. The abruptness of events left Elliott feeling betrayed, he said, although he said he stepped down amicably and supports the new CEO. 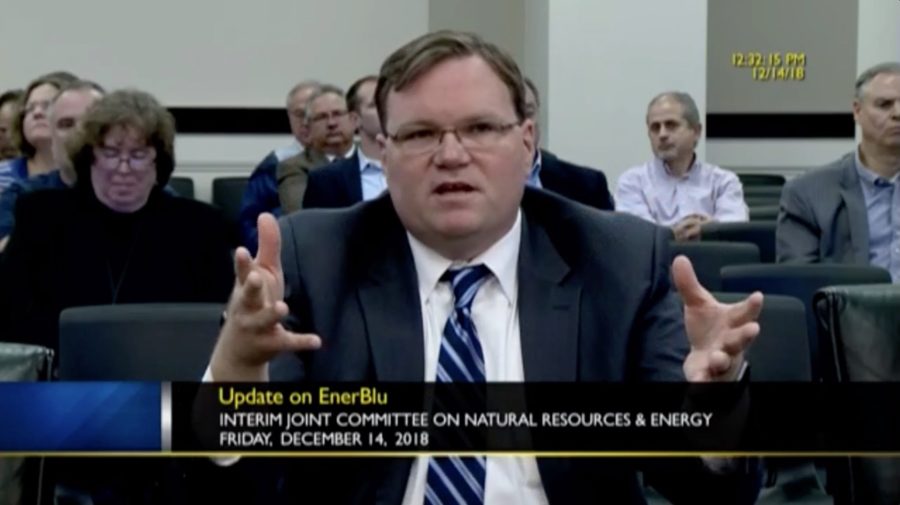 EnerBlu representatives said  that a primary potential investor in the Pikeville project had  withdrawn, leading the company to suspend plans. The company and state development officials declined to identify that investor. But Elliott confirmed the investor was Japanese conglomerate SoftBank Group.

One of SoftBank’s numerous operations is an investment fund called the Vision Fund, which was started to support innovative renewable energy and advanced technology projects.

EnerBlu planned to manufacture batteries that were uniquely suited to support solar arrays in hot climates.

Although no contracts with SoftBank had been signed, EnerBlu accepted from Kentucky a reported $30 million in tax incentives (and a handle of Maker’s Mark) to relocate its headquarters to Lexington in preparation for the opening of the Pike County facility.

But on Oct. 2, 2018, half a world away, Saudi dissident journalist Jamal Khashoggi walked into the Saudi consulate in Istanbul, Turkey, and never walked out.

A Saudi citizen, Khashoggi, 59, was at the time of his death a legal United States resident and a columnist for the Washington Post. Formerly a confidant and supporter of the Saudi royal family, Khashoggi had entered self-imposed exile when his critique of the Crown Prince made him a target. Khashoggi was visiting the Saudi consulate in Istanbul to get paperwork he needed to for his upcoming marriage to a Turkish citizen.

Journalist Jamal Khashoggi at a Project on Middle East Democracy panel in March, 2018.

Bin Salman denied his country was involved in the journalist’s disappearance, but citing mounting evidence, U.S. intelligence officials became convinced that Saudi operatives, likely at the behest of the Crown Prince himself, had executed a grim murder within the consulate’s walls.

The international community condemned the act. Suddenly partnering with Saudi Arabia took on a darker tone.

Business leaders faced a decision point when the Saudi government hosted a Future Investment Initiative conference in late October. According to Bloomberg, SoftBank CEO Masayoshi Son skipped the investment summit and the Saudis withdrew their substantial contribution to the bank’s investment fund.

There would be no massive solar development in Saudi Arabia, and no need for EnerBlu’s batteries to support it.

According to Elliott, SoftBank tried to continue plans for another large solar array near the company’s offices in New Delhi, India. But that country’s bureaucracy slowed the project to an eventual halt, he said.

“I asked senior SoftBank people, face to face, if [the Khashoggi murder] was going to affect our project, and they said no,” Elliott said. “I think they were trying to make it work, but somewhere along the line, between October and their pulling out, they knew and they didn’t tell us.”

EnerBlu spokesperson Xavier Guerin said there had been no binding agreements between EnerBlu and potential investors, but Elliott said SoftBank pulled funding on Jan. 14, days before final contracts were to have been signed on Jan. 20.

SoftBank did not respond to a request for comment.

Those included a New York-based private equity fund and a Qatar-based investment fund, both Elliott and Guerin said.

Guerin declined to confirm SoftBank’s involvement, but said the “prominent investor” pulled out because of “a mix of very large business opportunities that fell through” at the same time the political environment for renewable energy shifted in “some emerging economy countries.”

EnerBlu’s decision to suspend comes as a major blow to Pike County, which has lost thousands of coal jobs.

Pikeville City Manager Philip Elswick said the city was notified on Jan. 30 that there was a possibility that plans for EnerBlu’s development would be suspended. Elswick told the Lexington Herald-Leader that he regretted the loss to the county.

“We are extremely disappointed with this potential investor’s decision and are well aware of the hope that EnerBlu’s project has generated in Pikeville and the eastern Kentucky region,” EnerBlu’s new CEO, John Thomas, said in an interview. “As we move forward as a company to develop a viable and impactful project, we encourage other companies to discover what we found within this region of Appalachia.”