The KFC Yum! Center was recently listed as the 24th best concert arena in the world by Pollstar.com. It was named the 10th best overall venue in the nation.

Louisville and the state of Kentucky have made several lists recently, including ‘fattest states‘ and most family-friendly cities.

It’s easy to discount these lists as arbitrary or frivolous, but there is something to be said for garnering any sort of national attention. Especially when it’s recognition for something like Louisville Slugger Field or could encourage tourism.

GQ/Yahoo Travel published a list of ‘The Coolest Small Cities in America‘ this week, saying:

“Here’s a pocket of our culture where where dirt-cheap field-level tickets are available at the walk-up counter, where kids can run the bases after the game without getting tased. Enjoy the slightly absurd undercurrent. Free gas-card giveaways! Win-or-lose fireworks! Appearances by semifamous local animals! We’re fans of the Louisville Bats, a Triple A club that draws more than 8,000 fans per home game. That’s just enough to summon a genuine crowd roar, but never enough to jam up the line for the bathroom trough.” 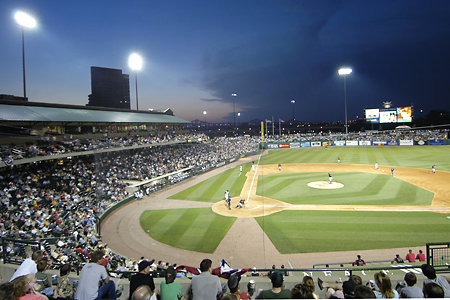 It’s an interesting list that praises Louisville for it’s triple-A baseball games, while noting other cities’ food or music.