The courtroom was silent as 19-year-old Dayjha Hogg approached the lectern at a Letcher County fiscal court meeting, stared down a panel of county magistrates, and spoke.

“I know COVID’s going around right now, so just imagine, there’s no COVID, normal society, and imagine you walk around and it’s like you have the plague.”

Hogg is biracial, and her entire county leadership is White. The Berea College student gripped the lectern to steady herself, and continued.

“People look at you and it’s almost as if, if they stare too long, if they breathe the same air, they’re scared that they’re going to catch the plague. That is just a small, small glimpse of what it was like growing up here in eastern Kentucky as a minority.”

Conversations about police brutality and racial equity are happening across the nation, and rural communities are no exception.

In Letcher County and Whitesburg, its county seat, a racial reckoning is unfolding that is at once peculiar to this rural Appalachian community and inextricably tied to the one unfolding across the nation.

This reckoning came after a peaceful Black Lives Matter protest in Whitesburg.

Hogg helped organize the protest, and she had been a little afraid not many people would show up. But roughly 200 people attended in a town of just 1,800 —  in a county where 80% of the vote went to Donald Trump in 2016. Democratic State Representative and U.S. Senate candidate Charles Booker visited from Louisville to speak at the Friday evening event.

“It was amazing before and afterwards,” Hogg recalled. “We were like, ‘Oh my gosh, we pulled it off, we really did it!”

“This is a strange new world we live in today!!!” the executive wrote. “You have a small group of far leftists who want to stir the pot on racism that rarely exists anymore but in their minds. Then you have the majority of the people that have common sense that get pushed into a corner on these nonsense issues.”

“I believe the ones that are always pulling out the race card are the racists,” he said, comparing those who wanted to remove Confederate statues to Hitler.

When Hogg saw the post, her heart sank. She wasn’t surprised, she said — she had lived with racism all her life. But this time, something was different: Her White friends, even White people she barely knew, stood with her.

At the regularly scheduled fiscal court meeting the next day, about 20 Letcher Countians filed into the bare and echoey courtroom. For a local governmental body that primarily concerned itself with paving roads and repairing water lines, it was an unprecedented crowd, and it touched Hogg that they had shown up in her defense.

The soft-spoken judge-executive looked uncomfortable as he brought the meeting to order.

“I suppose you all are here because of the Facebook post I posted,” Adams said. “I’m sorry if anything I said offended you. I’m just one man.”

And he ceded the floor.

“This is my hometown, so all my life I’ve always empathized with everyone around me,” Hogg said. “I’ve always understood, they’re just uneducated, this is how they were raised, this is how they grew up. But today I have these people here supporting me and wanting me to speak up. And for years, me and my family, and so many people in the Black community, have had to hear these derogatory terms and take them, and accept them, and lay down with them, and day by day it belittles you until you feel less than anyone in your community.”

Hogg shared the daily discrimination she faced in school, saying that her mother always tried to speak to the principal about it, but Hogg wouldn’t let her. Hogg knew that if she was seen protesting the abuse she faced, she would be accused of playing the race card to get special treatment. She said whenever the cafeteria had watermelon, she never took a slice, because it wasn’t worth the taunts she would receive.

“If I have to rip open a scab, dig into an old wound because my friends are here to support me and that’s what it takes to prove that there is racism in Letcher County, then that’s what I’m willing to do.” 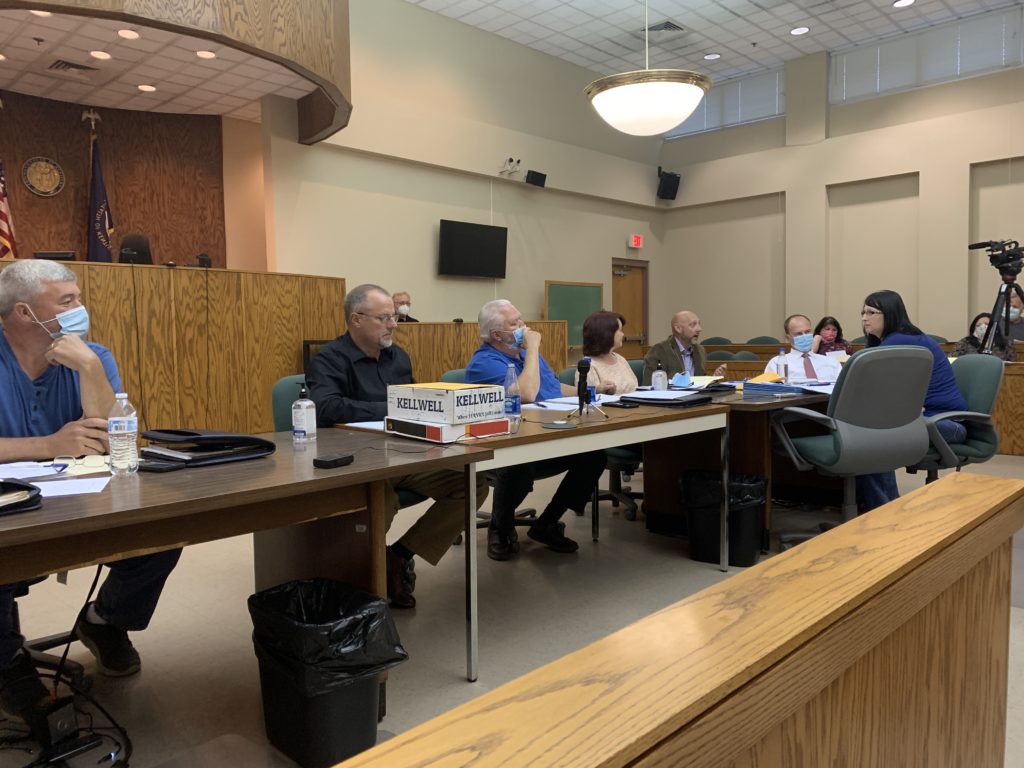 Letcher County is 98% White, according to the 2018 American Census Survey, but art and media about Appalachia too often erases the experiences and contributions of Black Appalachians and Appalachians of color. It’s too easy, Hogg said, for racism and discrimination to be swept under the rug.

Tanya Turner, a local White resident and a co-host of the popular Trillbilly Workers Party podcast, also spoke, asking the court to remedy the damage caused by Adams’ post.

“I think since words have been used by people on this court to divide people, I hope that there are some real solid actions taken by this court to change that narrative,” Turner said. “This court could release a statement of solidarity in support of Black lives. That is the minimum that we could do.”

The court has not yet released such a statement.

Turner also raised concerns about the police presence, a touchy topic in the small community.

“This is a town with six police officers, yet there were probably 20 police officers downtown Friday night [at the protest,]” Turner told Adams and the other magistrates. “Now, I don’t know why that was, or what the expectation was, but that did not make people feel safe.”

While protestors in many cities, including Kentucky’s largest city of Louisville, have been met with tear gas and rubber bullets, the Whitesburg protest was held with the blessing of local police chief Tyrone Fields, who is biracial.

Still, heads turned when Turner finished speaking and Fields stood up from a bench in the back of the courtroom. “May I follow up, please?” he asked the judge-executive.

Whitesburg had four police officers, actually, he corrected Turner, and he had called in help from other local forces to make sure all the streets to downtown were blocked off after other peaceful protests in Kentucky and around the country faced aggression from right-wing counter protesters.

But Fields also wanted to take a stand.

“It’s safe to say that George Floyd was ⁠—  and I’ll say this as the chief of police ⁠— it’s safe to say that he was murdered. We do know that. They might as well have hung him from a tree. Any police officer that thinks he was not murdered should immediately turn their badge in.”

Following nearly two hours of comments from the community, attendees reiterated their demands for a statement in support of Black lives and for members of the court to denounce the words of their superior. One by one, each magistrate said he or she disagreed with what Judge-Executive Adams had written.

Adams finally responded with “I’m sorry if I offended you.”

One woman, who had been silent for the duration of the meeting, interrupted. “I’m sorry, I just have to. You’re saying you’re sorry if you offended anyone, but are you sorry for what you actually said?”

Adams repeated the same statement, so I pushed him on it in his office a few days later, on Juneteenth.

He chose his words carefully.

“I’ve got a son that’s got Down Syndrome,” he explained. “And after I get to thinking about that, people say things that sometimes bother me because of him. And I could see the same thing in racism now.”

He became emotional, swallowing back tears.

“If I’ve hurt people’s feelings, I’m sorry. I should not have brought what’s national, going on nationally, and combined it with people wanting to speak out locally.”

Hogg doesn’t think Judge Adams really gets it, but she says the conversation was productive. For now, Hogg says, that feels like justice.

“This little town is making big moves, just like all these other places,” she said.

Q: What did the people you talked to say about the experience of being interviewed for public radio?

With the exception of Judge-Executive Adams, who seemed very uncomfortable having me in his office, everyone I spoke to for this story was elated to share their experience confronting racism in their hometown. Dayjha Hogg, the protagonist of this piece, said something that stuck with me: “I never thought my experience was that important or interesting, but now with all these other people listening to me, I guess it must be.”

Q: What surprised you about this type of community engagement?

It was joyful! The majority of the stories any journalist writes are negative— which makes sense. It’s our job to make sure people know what’s going on in their communities, whether it’s political corruption, environmental harms, or any number of things. But when the status quo is the silent tolerance of injustice, joy becomes newsworthy.

Q: What lessons do you have for others who want to do the same?

Local governance meetings remain a timeless method of taking the pulse of your community.