The recent bankruptcy of Ohio Valley coal giant Murray Energy has renewed fears about the already shaky financial foundations of the pension plan that tens of thousands of miners and their families depend upon.

The seismic collapse of yet another coal employer has lawmakers from the region renewing their push to fix the United Mine Workers pension fund, and has even raised broader concerns about pensions for a range of other trades.

Murray Energy has a substantial footprint across the region. It is also the last major employer contributing to the UMWA pension plan. In its bankruptcy filing, the company reports $2.7 billion in debt and more than $8 billion in obligations under various pension and benefit plans. More information will likely come out as the bankruptcy court takes up the matter.

Bob Murray speaking at an event in October, 2019.

Bankruptcy proceedings often take months, and it’s not yet clear if the company will be relieved of its pension obligations. UMWA spokesperson Phil Smith said if recent history is any guide, that is a likely outcome.

Smith said if the bankruptcy court relieves Murray’s pension obligations, that could be another $6 billion loss for the UMWA retirement fund.

The UMWA health and retirement fund covers the benefits of retirees whose employers went out of business before 2007. The plan was already facing insolvency by 2022, largely due to the industry’s decline in production and a wave of bankruptcies. Smith said now that Murray Energy has filed for Chapter 11 protection, the fund could become insolvent by next year.

Murray Energy is among nearly a dozen coal companies to go bankrupt during the Trump administration, despite the repeated claims of a “coal comeback.” Some lawmakers worry that the combined impact could cause a domino effect for other multi-employer pensions across the country. 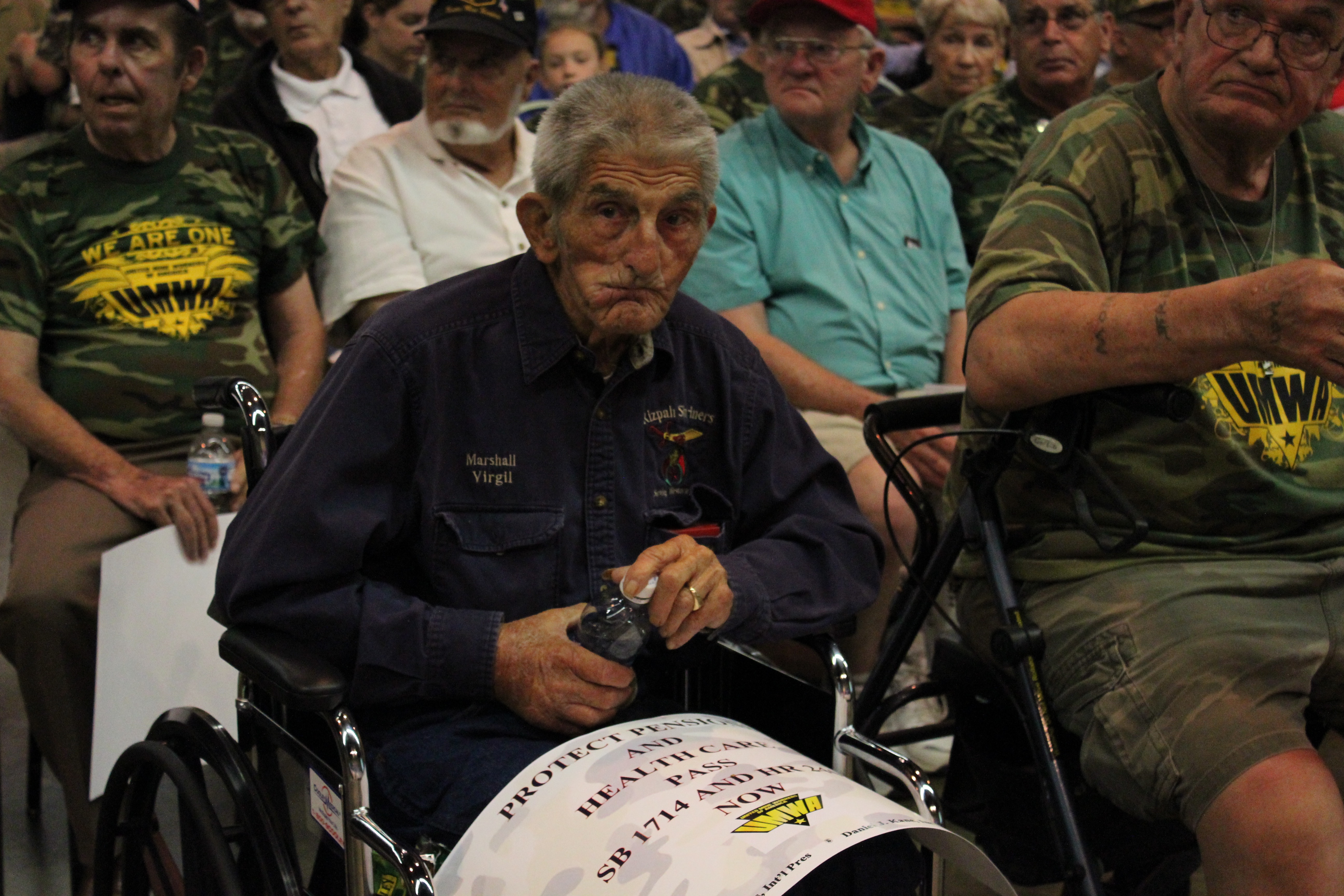 Insolvent plans fall to the Pension Benefit Guaranty Corporation, or PBGC, which is a federal backstop for pension plans. Lawmakers from around the Ohio Valley warn that the fund is also already at risk, and it would be in far more financial trouble if it became responsible for the UMWA plan.

Last year a bipartisan group of lawmakers served on the Joint Select Committee on Solvency of Multi-employer Pensions. The group was tasked with finding a solution to pension problems affecting a range of workers including teamsters, coal miners, iron workers, and bakers and confectioners.

Sen. Rob Portman, an Ohio Republican on the joint committee, warned at a field hearing last year that if even one of the larger plans becomes insolvent that could put the PBGC at risk as well.

“That wave of bankruptcy has the potential to create an economic contagion effect,” Portman said. “In other words, it would spread around our economy.”

A union miner at the rally for pension protection.

But despite the shared concern, the committee missed a self-imposed deadline to come up with a solution and disbanded at the end of the year.

The UMWA’s Smith said more than $1 billion goes into local economies every year from health care benefits and pensions that are paid directly to retirees. More than $130 million flows into Kentucky alone.

Simon Haeder is an assistant professor of public policy at Penn State University. He said shoring up the UMWA pension plan would have been a lot less expensive and more manageable if Congress had started to address the “inevitable” issue much earlier.

“Coal miners are one of those probably worst-case scenarios here,” he said, “because the balance between people paying into the system and people taking out of the system is so out of whack.”

Haeder said the miners’ pension problems also raise questions about whether people can rely on these pension systems in the future. He said the decline in union membership and the complex actions of bankruptcy courts have given employers an edge over the interests of workers when a business goes under.

Sen. Joe Manchin and other coal-area lawmakers introduced the American Miners Act to try to shore up the shaky UMWA pension. The West Virginia Democrat’s bill would transfer some money from interest accrued on the federal Abandoned Mine Land fund – which is used to clean up old mining sites – into the mine workers’ pension plan. It would not take money directly from the fund. 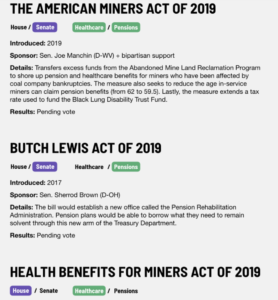 Manchin is attaching the American Miners Act to a spending bill that keeps the federal government running. He said most of the pension checks are for $600 a month or less and many of those are going to widows who depend on that money for basic living expenses.

“When coal companies go bankrupt coal miners benefits are at the bottom of the priority list,” Manchin said.

The bill would also restore a tax on coal used to fund the federal Black Lung Disability Trust Fund, which Congress had allowed to be reduced by half last year. Pennsylvania Democratic Sen. Bob Casey is a co-sponsor on the bill.

“I won’t stop fighting until we’ve secured the promised pensions and an extension of the Black Lung Disability Trust Fund for coal miners and their families,” Casey said. “I hope Congressional Republicans will join our mission.”

The Senate bill does not yet have a Republican co-sponsor but there is general bipartisan support for action on the miners’ pensions. In the House two pending bills propose a similar funding method to shore up the UMWA fund. Republican Rep. David McKinley of West Virginia is the lead sponsor on one of those.

Democratic Rep. Bobby Scott of Virginia proposes a version that also addresses the health care benefits of retirees whose companies went bankrupt last year and have been or will be relieved of those obligations by a bankruptcy court. Both bills have passed out of committee.

But of course one Republican’s voice will matter most, and that is Senate Majority Leader Mitch McConnell of Kentucky.

McConnell had previously postponed action on miners’ pensions by splitting an earlier proposal to address both retirement funds and health benefits. McConnell introduced his own version in 2017, which provided for miners’ health benefits but avoided dealing with pensions.

In an emailed statement, McConnell said he’s concerned about the insolvency issues facing a number of multi-employer pension plans, and that he supports finding a bipartisan solution for pension reform.

It’s not clear when or if the majority leader will take up the issue of coal miners’ pensions or healthcare benefits.

The Miners Act and other similar bills have attracted criticism from fiscal conservatives such as the Heritage Foundation. Heritage calls the proposal a “bail out” that would do nothing to “fix the root of the problem” with the large pension plans.

Manchin said he will attach the American Miners Act to every vehicle possible in Congress in the hope that McConnell will agree to take action.

Louisville children 6 mo. and older have begun to get COVID-19 vaccines

Kentuckians seeking abortions will have to travel