Janet Clayton is standing thigh-deep in a back channel of the Elk River. Clad in a wetsuit and knee pads, the silver-haired biologist with the West Virginia Division of Natural Resources reaches into a bright orange mesh bag submerged in water.

Inside are a half dozen mussels she plucked from the rocky river bottom.

“This is called a long solid,” Clayton says. An earthy colored shell about the size of a computer mouse sits in the palm of her hand. “As it gets older it gets really long.” 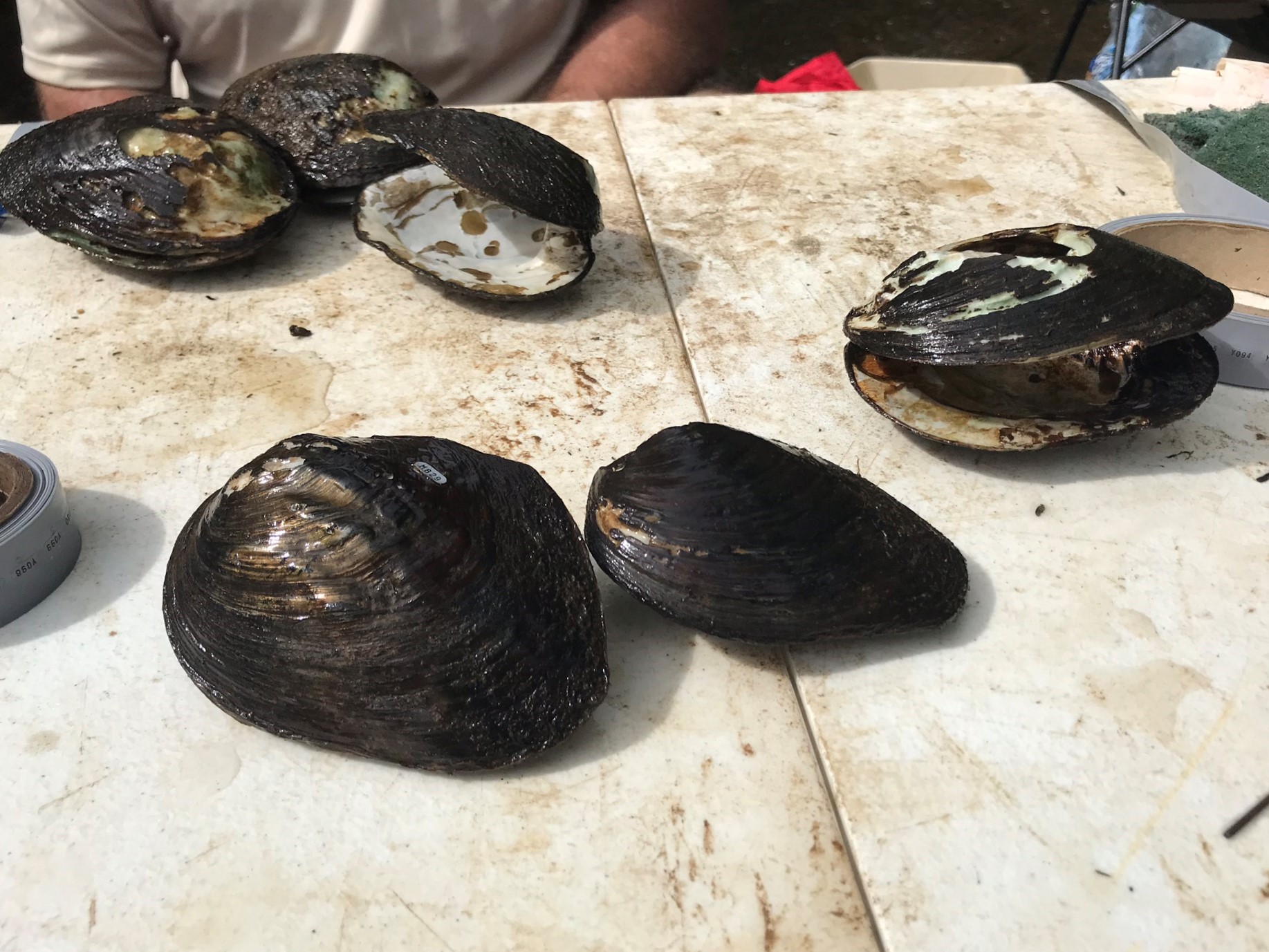 Biologists measure and monitor the mussels at the Elk River site.

The biologically diverse waterways of the Ohio Valley are home to more than 100 species of freshwater mussels. Each can filter five to 10 gallons of water daily. But pollution, land use change, and a changing climate threaten their very existence. They’re among the most endangered animals in the United States.

Clayton, a West Virginia native, began her career researching aquatic invertebrates, but quickly switched gears to studying the state’s mussels and never looked back. She has worked with them for three decades and leads West Virginia’s mussel program, which she helped develop.

As Clayton approaches retirement next June, she is reflecting on how the field has grown and changed. Today, scientists know a lot more about freshwater mussels and how to protect them, partly due to her work.

Some other biologists call her a “hero” for the often overlooked species. But just as Clayton prepares to pass on her pearls of wisdom, she is also sounding an alarm about the population decline she has documented, and what that says about river quality.

“Mussels live for decades in our streams,” Clayton said. “So, they’re like the canary in the coal mine.” 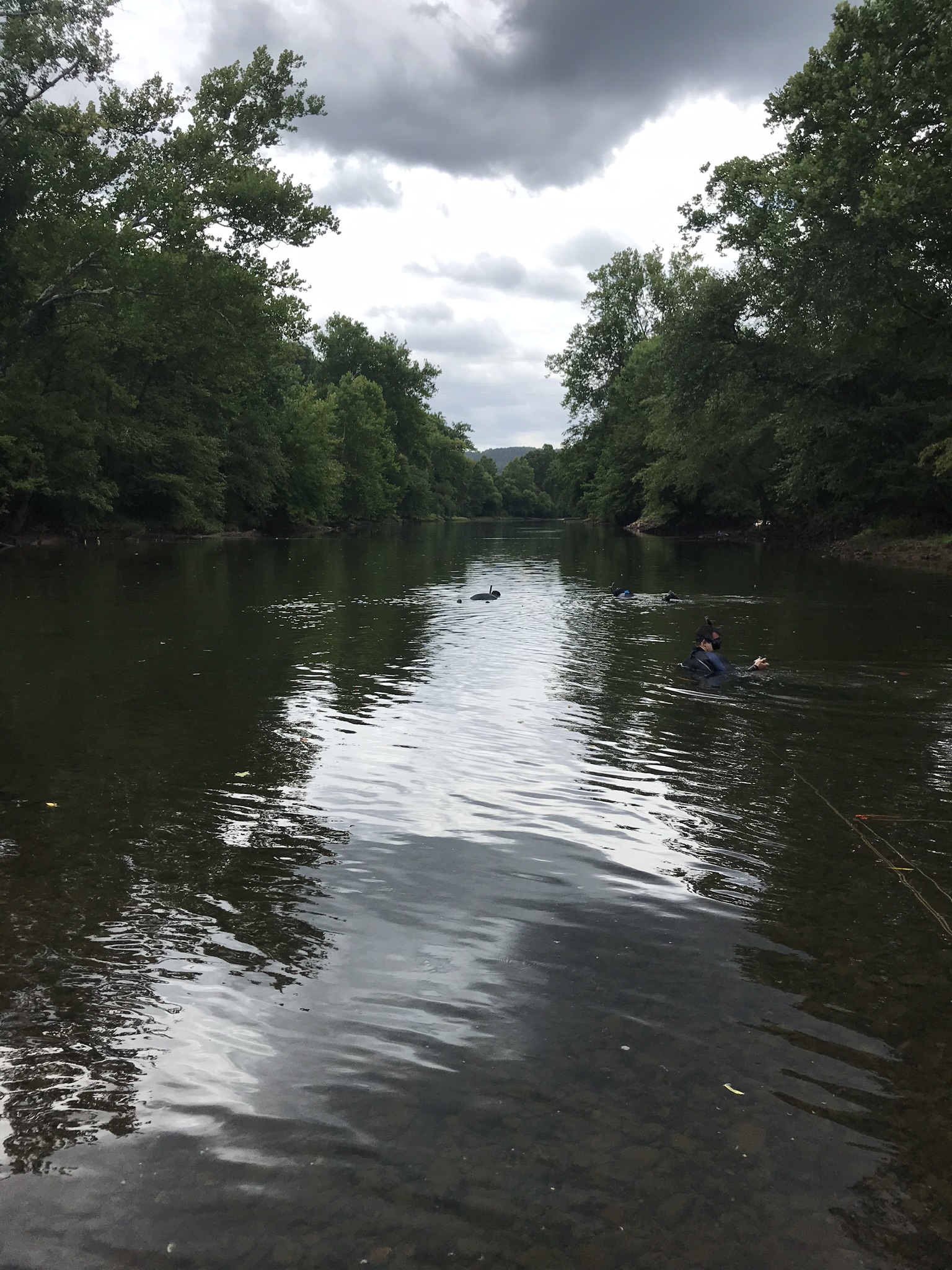 Biologists at work in the Elk River.

In addition to filtering water, mussel excrement provides food for macroinvertebrates and benthic critters. Mussels themselves are a food source for many mammals, and the bivalves also help keep river bottoms in place.

To protect and preserve freshwater mussels, Clayton and her team use a three-pronged approach.

“Surveys, monitoring, and restoration are kind of the three components,” she said.

Working with partners across state and federal agencies in the Ohio Valley, Clayton developed mussel surveying methods that have been widely adopted. Her team has also set up 26 long term monitoring sites, which helps the team assess the health of the state’s mussel population. The researchers also help restore mussels to waterways, sometimes by relocating parts of healthy stock. Other times, lab-grown mussels are used.

“One of the important things that scientists have learned in the last couple of years is how to grow them in captivity without their specific host fish,” said Tierra Curry, a Kentucky-based scientist with the Center for Biological Diversity, which advocates for federal protections for mussels and other threatened species.

“So now, the knowledge to be able to breed them and save them is available, but they don’t have the funding that they need to keep them from going extinct,” she said.

Curry said Clayton’s work on mussels has been very important to the field.

One aspect of that study is tracking mussels found at long-term monitoring sites. On a recent weekday, Clayton and a handful of researchers clad in wetsuits and goggles bobbed in the gurgling Elk River.

The scientists are plucking every mussel they can find out of the water and placing neon flags in their wake.

“When we go back, we can put the mussel in a hole,” Clayton said. “So it’s easier, less energy consuming for that mussel to rebury into the substrate.”

Each mussel will be tagged with small silver plastic tag and measured.

“So we’ve actually had mussels in here who’ve been tracked for the 15-year period we’ve been monitoring here,” she said.

Five years ago, Clayton and her team pulled hundreds of dead and dying three-ridge mussels from this river. The cause remains a mystery.

“We have no idea,” she said. “We’ve gone through investigations trying to figure out what’s the problem.”

Good quality water is vital to the health of mussels. And humans have not always treated waterways with care. Chemical discharges, excess sediment and dams pose challenges to mussels. 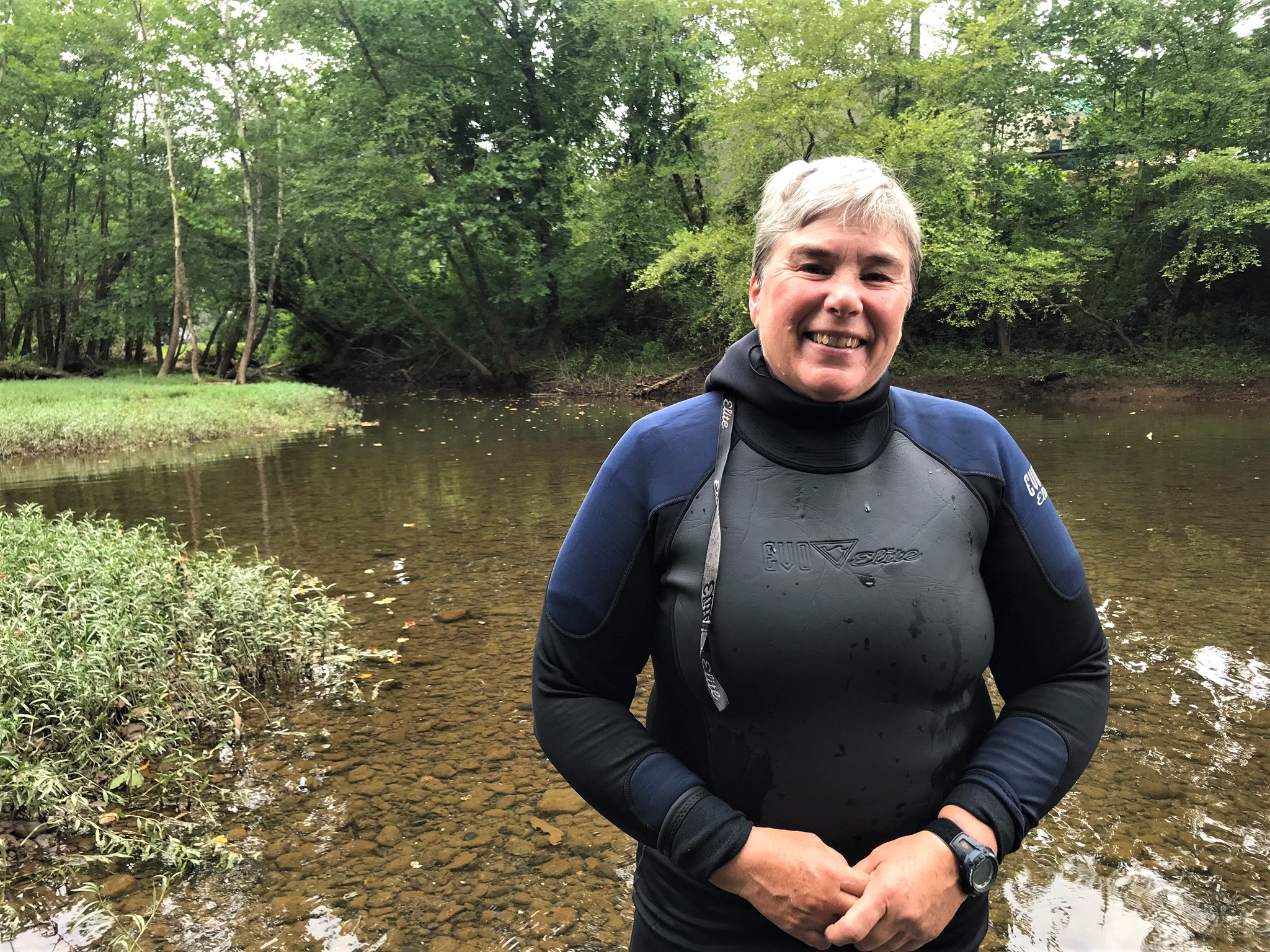 Biologist Janet Clayton has studied freshwater mussels for much of her 30-year career.

The team has successfully restored mussels after mortality events and have even seen once mussel-free streams come back. But there are also examples, like at this site in the Elk River, where the mussels aren’t flourishing, and it’s unclear why.

As she nears retirement, Clayton said she fears legacy impacts from coal mining, such as acid mine drainage, mean some waterways will never again be healthy enough to support mussels.

And new threats have emerged. Climate change could alter water flow and temperatures, and the growing natural gas industry brings water-intensive processes and pipelines that are being constructed through waterways.

“I’m concerned. I’m very concerned,” she said. “If mussels are dying – which in this case, they are – if mussels are dying, what’s in this water that’s causing them to die? We need to wake up and pay attention to what’s out there.”

Louisville Prepares as CDC Warns Of Spread Of Coronavirus In U.S.