Joe Oliver and Tony Brown peered into the dark crawl space beneath a Letcher County, Kentucky home. Already, they could see problems. The crawl space had been blocked off with just a thin sheet of plywood; the posts supporting the house rested on uneven blobs of poured concrete; the whole place reeked of mold.

A gas leak detector beeped urgently at the meeting of two pipes.

Later, the pair hauled themselves into the homeowner’s attic, appalled at the poor craftsmanship. A flimsy internal door was all that stood between insulated space and an unsealed attic. This homeowner was likely wasting a huge amount of electricity. 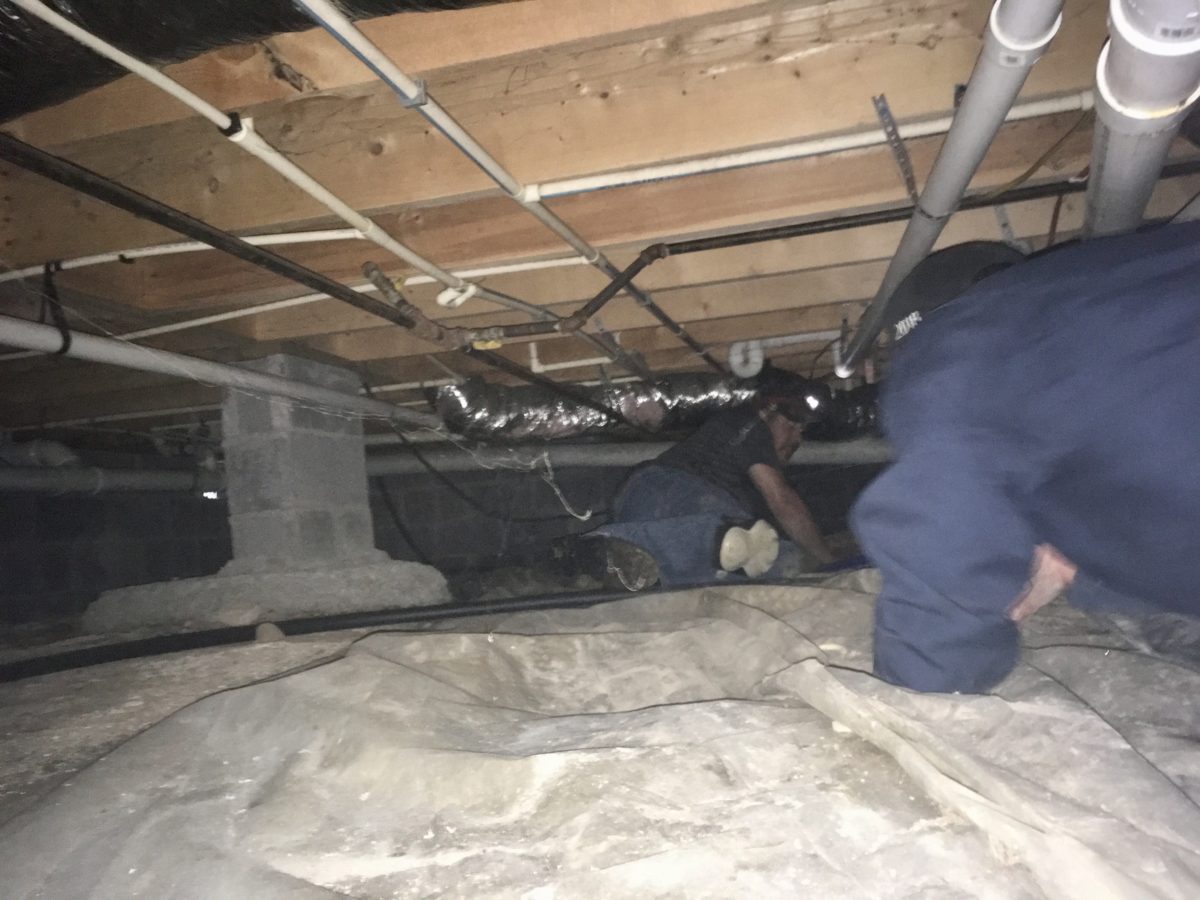 “I’d say this is about average for houses around here,” Brown said.

Brown and Oliver were conducting a home energy audit for the Appalachia HEAT Squad, a program through the nonprofit Fahe. The program helps homeowners and renters lower utility bills through energy efficiency upgrades.

Stagnating incomes and high unemployment have left many in rural Appalachia struggling to cover basic expenses. Housing is no exception. Recent research from the Pew Charitable Trusts found that although prohibitive housing costs are thought of as an urban problem, rural Americans are fast catching up.

In Letcher County, 12.6 percent of homeowners are considered severely housing cost-burdened, up from 8.3 percent in 2010.

A significant part of that is the cost of energy. Experts say that once utility costs exceed 6 percent of household income, families struggle to meet other basic needs. In some eastern Kentucky counties, the average resident is paying more than 19 percent of their annual income on energy costs. In some counties, the average low-to medium-income household spent more than 40 percent of their income on energy costs.

The average cost of energy in the state isn’t particularly high. Other factors, including the aging and substandard housing stock, contribute to the cost burden. Facing the combined effects of stagnating wages, growing utility bills, and rising housing costs, more residents in rural coal country are looking to energy efficiency and solar power for solutions.

Benham, in eastern Kentucky, was a coal mining town, and until the 1960s electricity was provided by mining company International Harvester. When mining operations closed down, International Harvester sold the power grid to the town. Benham, home to fewer than 500 people as of the last census estimates, is one of only a handful of municipalities in Kentucky to own and operate its own power company.

“Everybody takes care of one another,” Power Board chairman Danny Quillen said. “It’s a close-knit community.” Quillen, 50, grew up in the neighboring town of Lynch.

In 2015, the Benham Power Board began receiving donations for an energy efficiency program called Benham$aves. The program conducted five energy efficiency audits before it shut down for lack of funds. It recently restarted when it received an anonymous donation of over $200,000. Quillen hopes the money will cover 20 more audits.

Quillen received one of the five original audits and it helped cut his power bill from $400 a month down to about $180 a month in winter.

“This is an old coal camp, and these are old houses,” Quillen said, referring to towns that were built and owned by coal companies to house workers. “You’ve got a lot of homeowners in the city that are on a fixed income and are unable to upgrade things that need to be upgraded.”

In Harlan County, where Quillen lives, the average low-to-medium income household spends 27 percent of their annual income on energy costs. The average per capita income in Harlan County is $13,351. 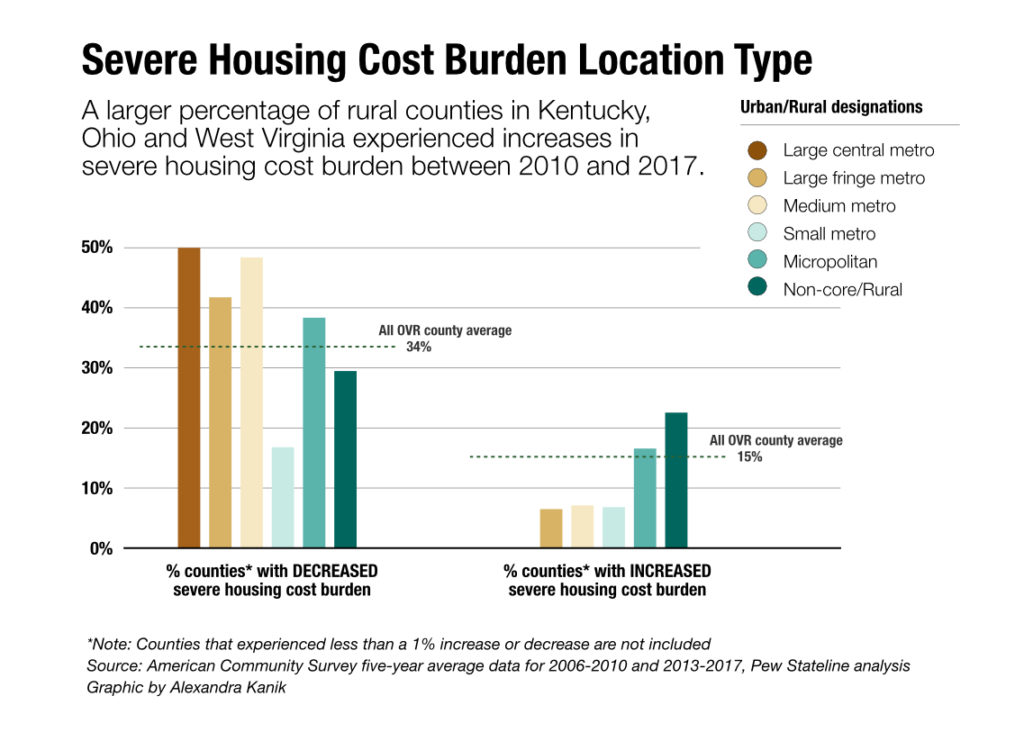 The impact of energy cost burden on already struggling families can be dramatic. A nation-wide study from the National Energy & Utility Affordability Coalition, an energy efficiency advocacy group, found that 17 percent of people who receive utility cost assistance from the federal Low Income Home Energy Assistance Program, or LIHEAP, had moved in with friends or relatives due to the high cost of utilities. Six percent of respondents had become homeless. Significant minorities of respondents said that because of high utility costs, they had skipped meals, heated their home using their oven, or failed to pay the full energy bill.

Katrina Metzler, the executive Director of NEUAC, said the need for energy assistance was much higher than the funds allocated for it. According to her organization, only 23 percent of Kentucky’s eligible population received energy cost assistance from LIHEAP.

“The average LIHEAP consumer is making well below $20,000 a year,” Metzler said. “After rent and groceries, there’s no money for anything else.”

A new homeless shelter in Letcher County has witnessed the impact of utility cost burden first-hand. Jimmy Scott, board member with Saving Grace Homeless Shelter, said he’s seen a number of residents seeking respite from the weather when they can’t afford their bills, or, in some cases, they are in houses that don’t have electricity at all. 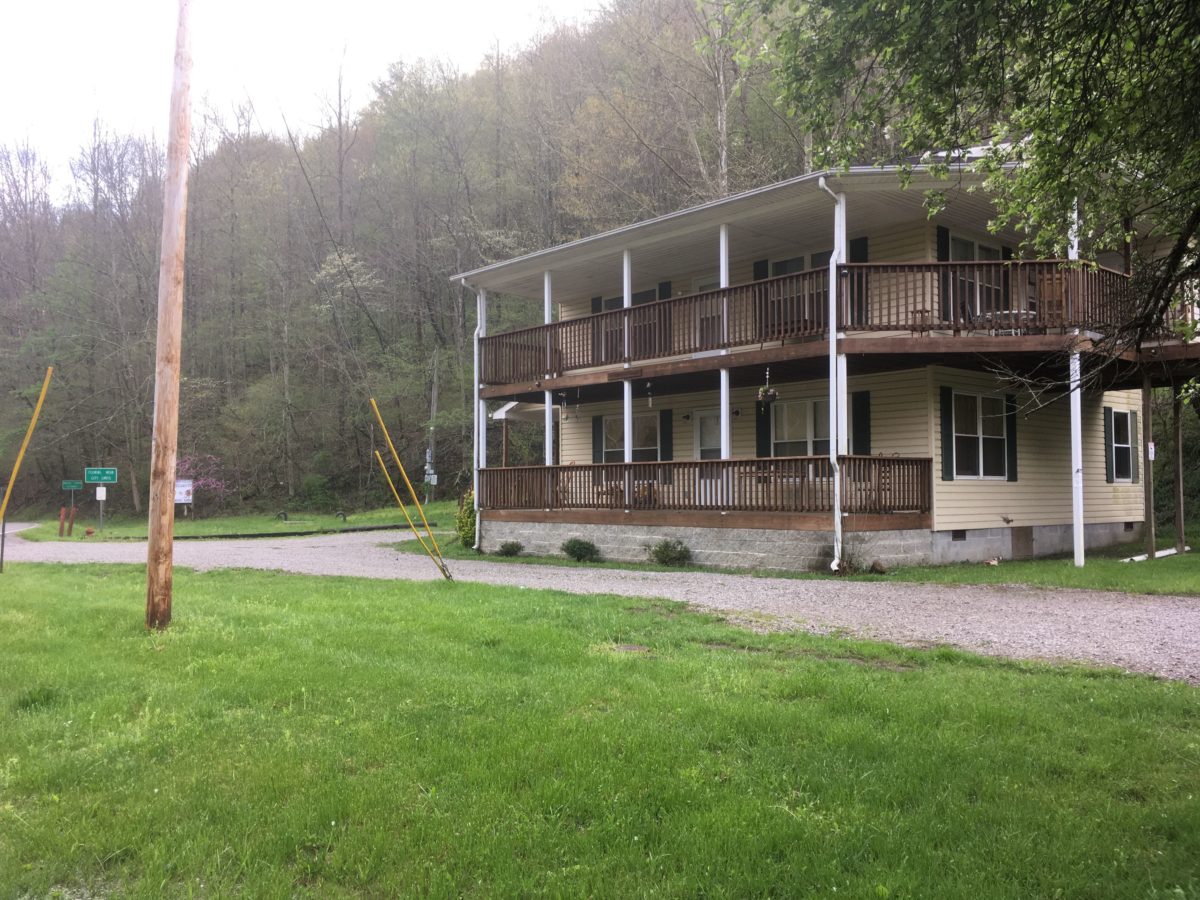 When Seth Long isn’t producing maple syrup on his family farm, he runs the Letcher County housing nonprofit HOMES, Inc. Long sat down with Fahe’s James Caudill and explained that functionally, HOMES was the only housing developer in the county.

“There’s not many trained professional builders out there building these houses,” Long said. “Most of these houses around here, you find a carpenter, you pay them an hourly rate, you buy the materials, and you end up with a home. But what you end up with are just energy hogs.” 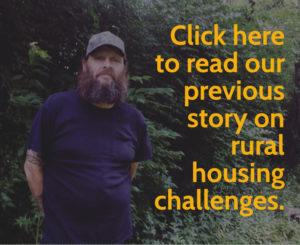 Much of eastern Kentucky’s older housing stock was designed for coal heat, which required a draft to let out harmful smoke. “Those houses weren’t really retrofitted to handle ductwork,” Caudill said.

Long said many of the audits his organization and Fahe perform on older homes don’t get to energy efficiency upgrades because they exhaust the available funds on safety upgrades first. “The roof is bad, the HVAC is out, the floors are falling through. There’s things that really need to be done. And you go through all that before you can really address the energy efficiency stuff.”

According to energy auditors Oliver and Brown, the most challenging homes to audit and upgrade are manufactured homes. Mobile homes that were built before the 1976 implementation of energy efficiency regulations are especially costly to heat, Jones found. There are about 31,120 such homes in Appalachian Kentucky and 36,106 in West Virginia, accounting for roughly 20 and 28 percent of all manufactured housing in those states, respectively.

Rural Appalachian ratepayers have also been hit by the loss of industrial energy consumers. According to the Kentucky Public Service Commission, Kentucky Power, the utility that covers much of eastern Kentucky, has lost 26 percent of its industrial and commercial load since 2010, more than every other Kentucky utility except one.

“The utility’s got certain fixed costs that it’s going to have to pay,” said PSC spokesperson Andrew Melnykovych. “If you have fewer industrial and commercial ratepayers to share that burden, that shifts those fixed costs to residential consumers.”

Because of the cost of transmitting energy and maintaining the system, it is significantly more cost-effective to deliver a large amount of energy to one big industrial consumer than it is to send the same amount of energy to many lower-consumption residential consumers. In order to spur economic development and attract more high-consumption customers, Kentucky Power has sought to offer competitive, reduced rates to certain industrial players.

“Few people want to go back to a time before electricity, so we want to make a system that works for all of us,” said Kentucky Power spokesperson Allison Barker. “That’s why we support economic development, it’s why we offer energy efficiency tips to our customers, and it’s why we want to help the communities that we serve through our acts of appreciation.”

According to the PSC, energy efficiency, or demand-side management programs, are not primarily about saving customers money: They are meant to help power companies delay the need to invest in new power plants. In eastern Kentucky, the loss of major consumers has meant that wasn’t a risk.

The PSC in 2017 mandated that Kentucky Power eliminate all but one of its energy efficiency programs. Kentucky Power offers heating assistance programs through community action groups, and some customers make use of the utility’s Average Monthly Payment program, which reduces the spike in energy costs in winter months by charging customers for the average of their last 12 months’ usage. 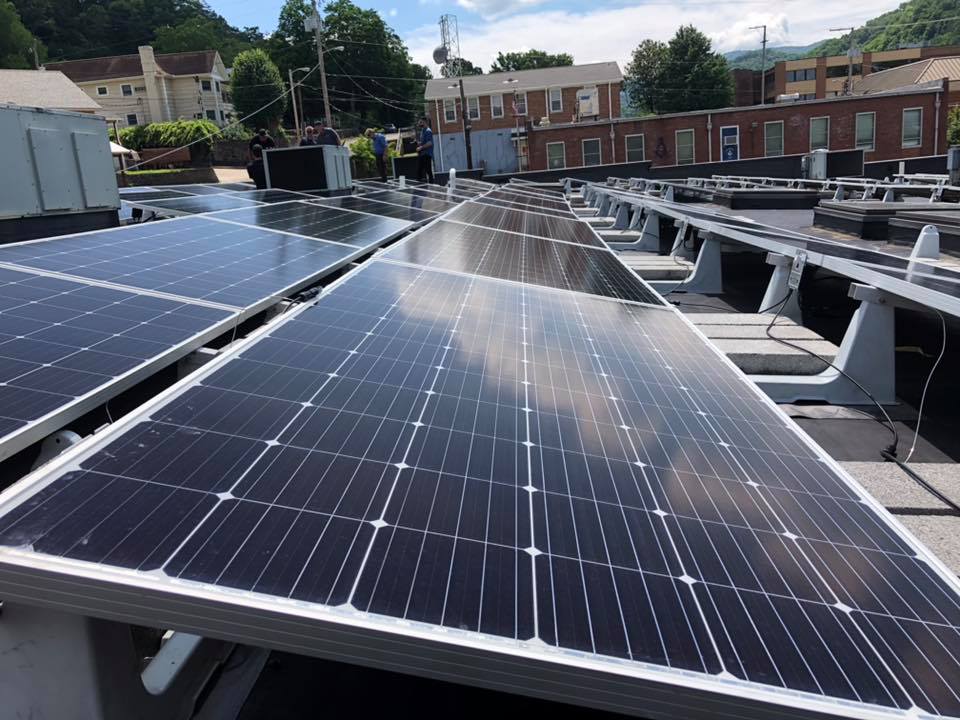 A recent analysis from the National Oceanic and Atmospheric Administration has shown that much of the Ohio Valley, including Appalachian Kentucky, will see an increasing energy burden as climate change progresses.

“It is very clear that energy expenditures in places like Tennessee, Kentucky, southern West Virginia and Ohio are going to increase 10 to 15 percent, according to the latest climate assessment,” said Union of Concerned Scientists energy analyst Joe Daniel.

The housing nonprofit HOMES switched to solar power this month to save money as energy bills rise.

“We’re seeing the trend of this cycle and saying, we can’t be in business here 10 years from now if we just go along with this,” Long said. “Thinking about this made us think we need to invest dollars in solar so that in the future we’re not so impacted by these trends.”

Solar energy had already been gaining ground in coal communities, with the Kentucky Coal Mining Museum in Benham turning on its panels in 2017. Now a combination of factors has spurred a rush among groups in the region already looking to renewable energy to protect against future utility cost increases. In June, Letcher County’s Kings Creek Volunteer Fire Department and arts and media organization Appalshop, which is home to Ohio Valley ReSource partner station WMMT, added solar as well.

This is partly driven by a recent change in state policy. Even as HOMES and other nonprofits are looking to solar power as a solution, the state has made it harder for people to afford solar. Kentucky in 2019 passed legislation that reduced the potential return on investment for solar installations, likely slowing residential and commercial shifts to solar power. Like most utilities, Kentucky Power supported the legislation.

Solar systems in operation by the end of 2019 will be “grandfathered” into the law and would be allowed to retain all the financial benefits of switching to solar. 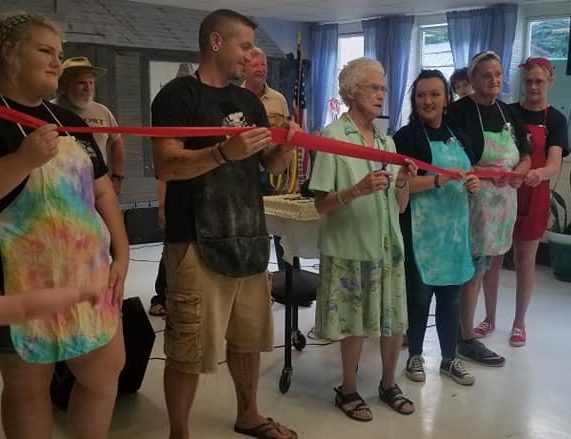 Gwen Johnson runs the Hemphill Community Center in Letcher County. She grew up in coal camp housing. “They were just built out of slats and plaster,” she recalled. “The windows were just single-pane and they weren’t caulked very well, so in the winter when the wind would blow, the curtains would fan in.”

Now, Johnson knows others in her community are in need of a warm place to go. In winter, she opens the center as a warming station. “We just had showers installed, so that when folks have power outages or they have no power, they can come here and warm,” she said.