Every morning Gianna wakes up in a wooden crib next to her mother’s bed. Sunlight streams through the window, warming the room and displaying the razor-wire fence just beyond the yard.

Gianna has spent her first year of life in the nursery at the Ohio Reformatory for Women, where her mother Abby Small is incarcerated.

“She’ll literally be almost two by the time we are getting out,” Small said.

Small was pregnant when she was sent to prison in 2021 and applied for the Achieving Baby Care Success program, the prison nursery that allows for qualifying non-violent offenders to keep their newborn babies with them during their prison sentence. The program fosters strong maternal bonds between inmates and their children with the hope of lower recidivism rates.

Aside from the view of the razor wire fence and the guard stationed in the nursery, there are few indications that it is a prison. The nursery consists of individual rooms, a kitchen where the mothers can prepare meals for the babies, a laundry room, a living room and a classroom. There are no bars on the windows or doors and there is even a bathtub for the babies – something that would ordinarily be considered a safety risk in prison but is permissible due to the low-tier status of the inmates. 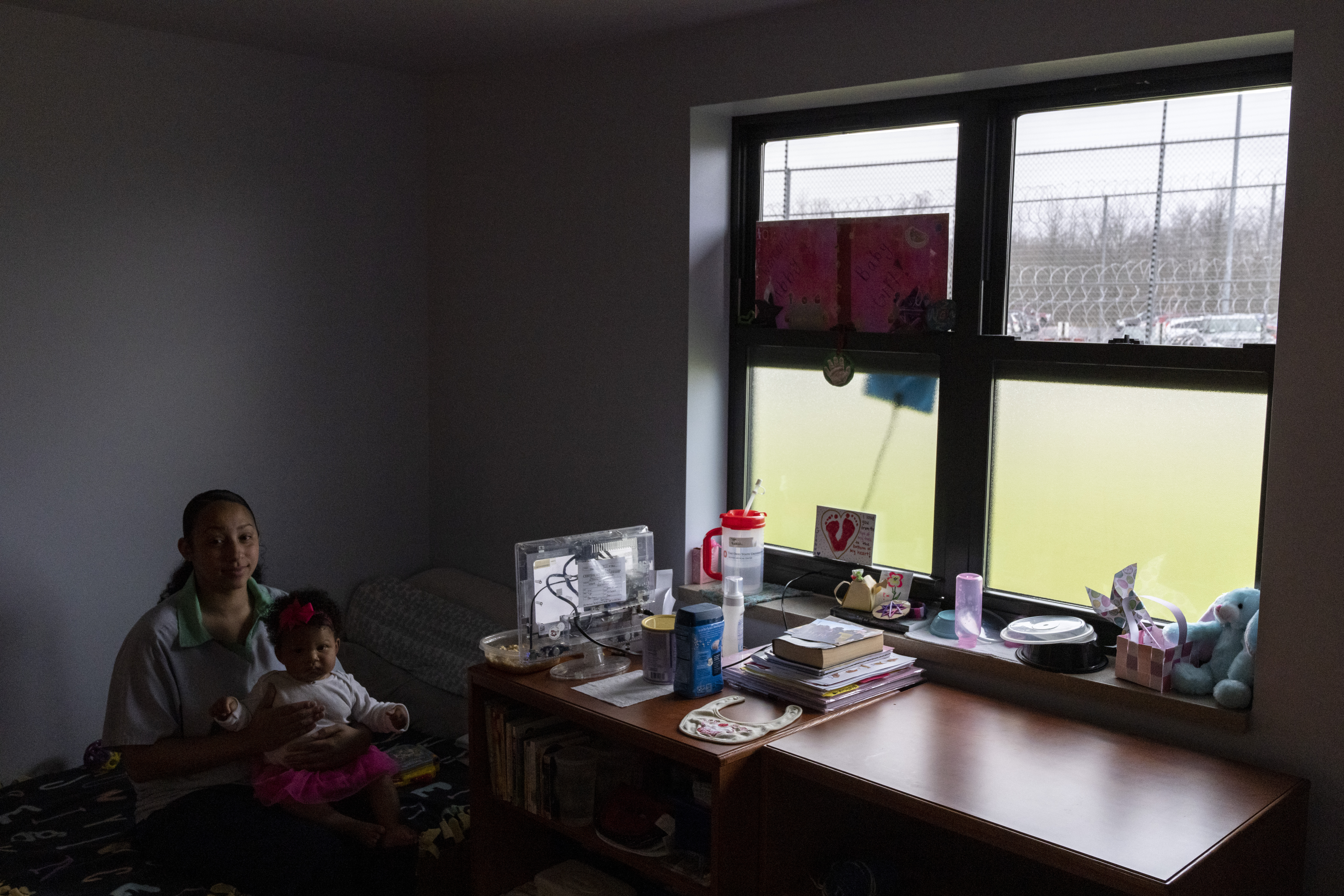 Abby Small sits with her 8-month-old daughter for a portrait inside of her room in the Hope House, where inmates in the ABCs program at the Ohio Women’s Reformatory reside, in Marysville, Ohio, on Wednesday, April 6, 2022.

Small, 31, says her daily routine with her child is fairly standard. After waking up, she washes any bottles that were used in the night, then she’ll get Gianna up and ready for the day. The two spend mid-morning playing with foam letter tiles and watching Sesame Street. Their day is then interrupted by a reminder of their situation: count. The time in every prison where inmates return to their cell and guards count to make sure each inmate is accounted for.

“She usually takes a nap during count – then after count sometimes we’ll come out here [in the common room] and play or eat,” Small said.

The importance of early bonding

“That kind of interaction shapes the brain architecture. When an infant smiles, moves, coos, cries, mothers instantly respond to their needs with care,” Jung said.

These are commonly referred to as serve and return interactions, where the infant gestures or vocalizes and the mother gives a natural and appropriate response. Jung describes the interaction as a “Ping-Pong ball” bouncing back and forth. This teaches the child how to express emotions and interact with its mother and others. Mothers also benefit from this kind of interaction, Jung said.

“Early bonding is very important, because as soon as a mother gives birth to a baby that new mother will be holding, touching, and having eye contact,” she said. “But the child, the baby,  they themselves come with all this ability to make a bonding with a mother. So the child smiles while holding mom’s hand all enhances the mother’s feelings of love and affection for the new baby too. This bonding process is very natural.”

Though biological mothers often have an earlier bond with their infants due to pregnancy and childbirth, serve and return interactions can occur with any person providing consistent care for the infant. The problem comes when that consistency is interrupted, like when a mother is incarcerated. Those children may be shuffled between various family members or foster care homes and receive mixed signals in response to their communication, something Jung said could be “detrimental” to development.

“That confusing mixed messages gives infants a sense of insecurity. That means infants will end up feeling very nervous and anxious and have a high stress level,” she said.

When Morgan Brodt, 31, was first sentenced to prison she was worried about her child’s future. She was living in Louisville, Kentucky at the time of her sentencing, but gave birth while in prison in Ohio. Designating a home for her child across state lines proved to be difficult and she feared that her son would be taken from her and sent into foster care. 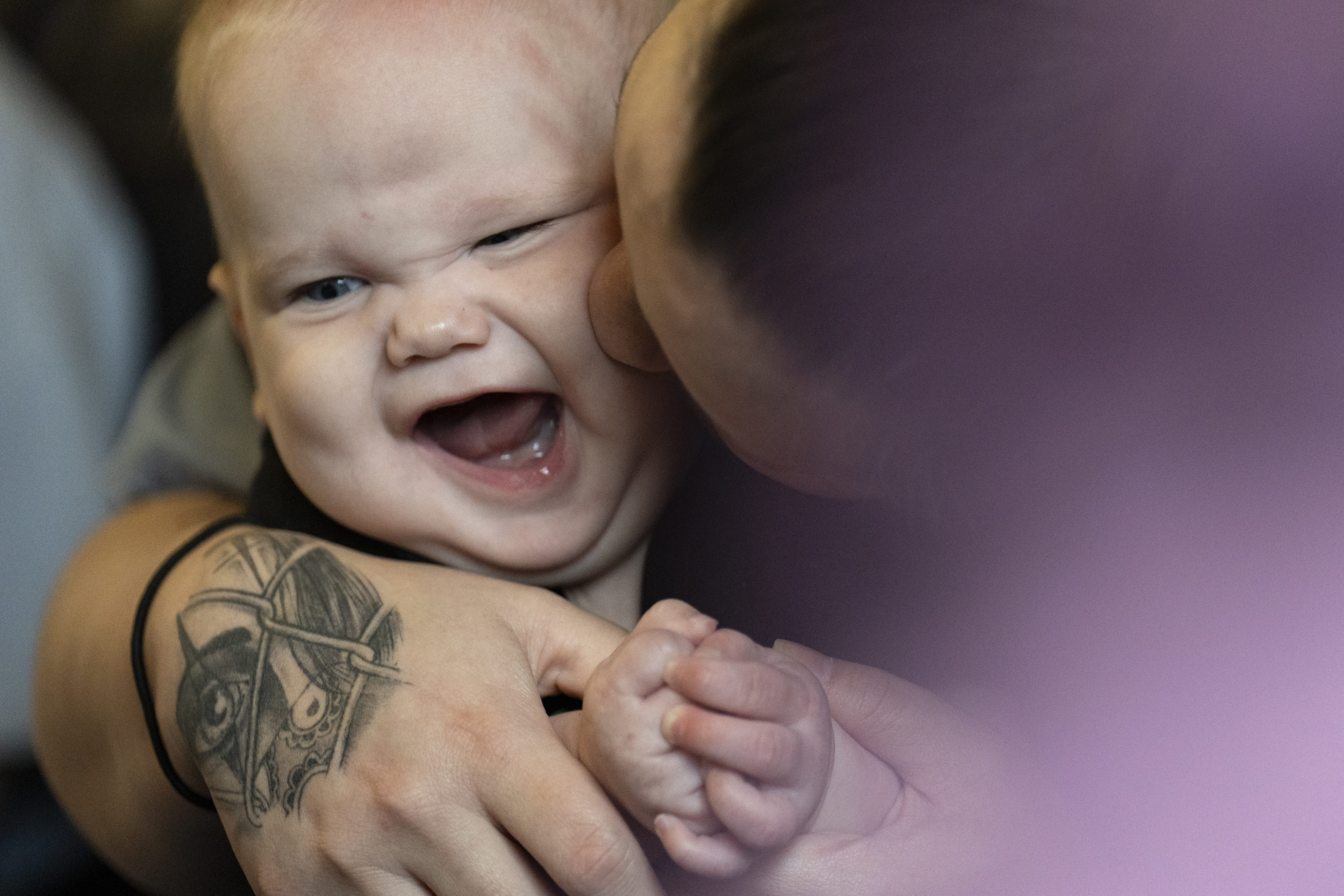 Morgan Brodt kisses her son Axel talk inside of the Hope House at the Ohio Women’s Reformatory in Marysville, Ohio, on Wednesday, April 6, 2022. “Even being in prison I’m more free now than I was in the madness of my addiction,” Brodt said.

“One of the scariest things about being here was watching all these women come back without their children, heart broke,” Brodt said. “And you’re just wondering, like, I mean it’s something that you are so excited for – having a child – but at the same time it’s so scary cause am I going to have to hand him away as soon as I have him? It was hard to watch and you’re just like, when’s my time?”

Corrections Officer Ernest Vehorn has been working in the nursery program since 2001.

“Whenever we get somebody in over there, the line I always use is, ‘If you’re going to be in this place, you just won the lottery,’” Vehorn said.

He isn’t far off. Currently there are only eight operational nursery programs across the country and it’s estimated that up to 2,000 infants are born to mothers in prison each year. As the number of incarcerated women continues to climb each year, this number is likely to go up.

Despite this, many are still hesitant about prison nurseries. Vehorn says he was opposed to the program at first, but became one of its biggest supporters.

“I thought, that’s kind of insane, being inside here with your children,” Vehorn said. “But after working in the nursery program and seeing what actually happens, the positive and mother and child bonding – you can’t replace that. When a child is born and they have their mother there for them. You can see some of these kids, the look in their eyes when they see their mom, you see the love, you can see the bond. It’s neat.”

The Achieving Baby Care Success program provides more than just an opportunity for mother’s to bond with their children. The infants regularly see a pediatrician and are enrolled in Early Head Start, the school readiness program. Additionally the program aims to give the children as normal of a childhood experience as possible. This includes celebrating holidays with crafts and activities, and visits from Santa Claus and the Easter Bunny. 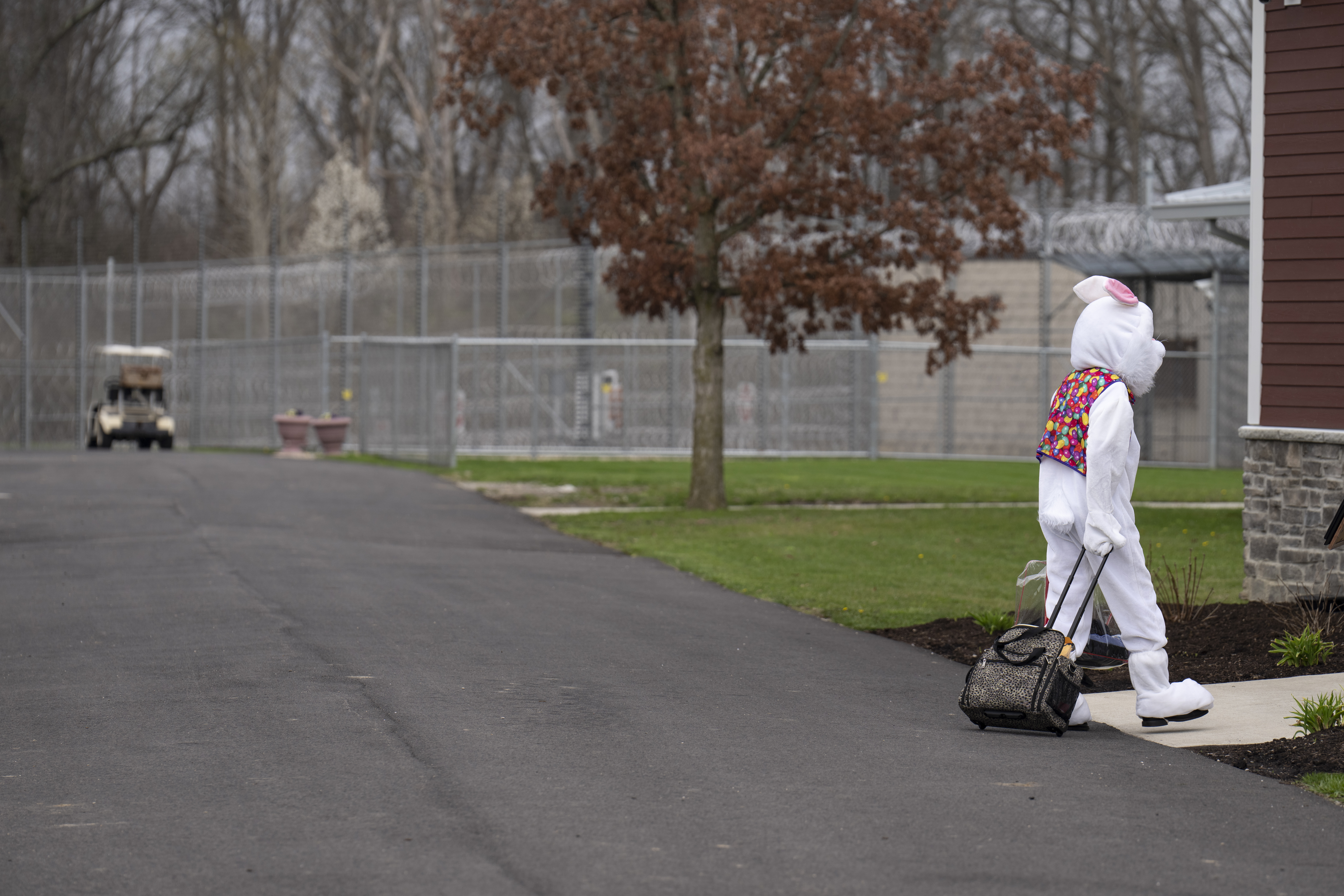 Steve Brown dressed as the Easter Bunny walks towards the Hope House at the Ohio Reformatory for Women, in Marysville, Ohio, on Wednesday, April 13, 2022.

“My biggest thing is to model, to be a model for them of how we want them to act with their children,” Pearce said. “They embrace it. It just amazes me, they are like sponges.”

Inmates from both the nursery program and general population are enrolled in the classes together, which Pearce said can cause problems. She said that mothers who do not have access to their children find it difficult to hear the nursery program mothers complain about being tired or their baby having colic.

“They have the privilege, but not everyone does,” Pearce said. “There’s a lot of grief in coming back…Because they are gone, what, 48 hours, some less? And then they’re back here and they’re just supposed to forget what happened.”

Katy Will is the social worker at the prison who helps provide counseling for the inmates who have to give up their babies. She also coordinates the programming for the nursery, which also include nutrition and lactation services through the local health department.

With drug related arrests increasing significantly for women in the last 35 years, Will helps find placements in half-way houses or rehabilitation facilities for nursery program mothers dealing with substance use disorder who feel they still need additional recovery time after they are released from prison.

“It’s so important to give them wrap-around services so that they will be successful when they leave. Recovery is huge,” Will said. “Once they leave the program, if they are able to abstain from use, I think they come away with excellent skills and the possibility to be an excellent mother in the community.”

Inmates in the nursery program have the full responsibility of caring for their children and cleaning the nursery itself. Morgan Brodt said this allows them the opportunity to form a community.

“We’re all in prison here, we all struggle, but raising a child here is a whole different struggle that people wouldn’t understand if they hadn’t been there. And to have that with each other, it’s a bond like you wouldn’t… Like we’re learning, we’re learning to not just be parents, but parents in prison and we’re doing it together,” Brodt said.

Shaina Alloway, left, Reese Reed and Morgan Brodt laugh while watching their babies play inside of the Hope House where residents in the ABCs program at the Ohio Women’s Reformatory live, in Marysville, Ohio, on Wednesday, April 6, 2022.

In May, the  program hosted a family day at the prison. Tears and laughter flowed freely as the families reunited, many for the first time since the babies had been born.

The event allowed Abby Small to be with all four of her children at once for the first time, as normal visits are restricted to three people at once.

Abby’s father Tom Small said he misses her daughter, but he knows that this is the best situation for her right now.

“I think it was probably best in her situation, to keep her out of the general population and keeping her with her child,” he said. “Making her have to take care of [Gianna], I think that it’s helped quite a bit. It’s been a good program. Now, do I wish we could see her more often and out in the open? Yeah, but I think it’s been a good program for Abby.” 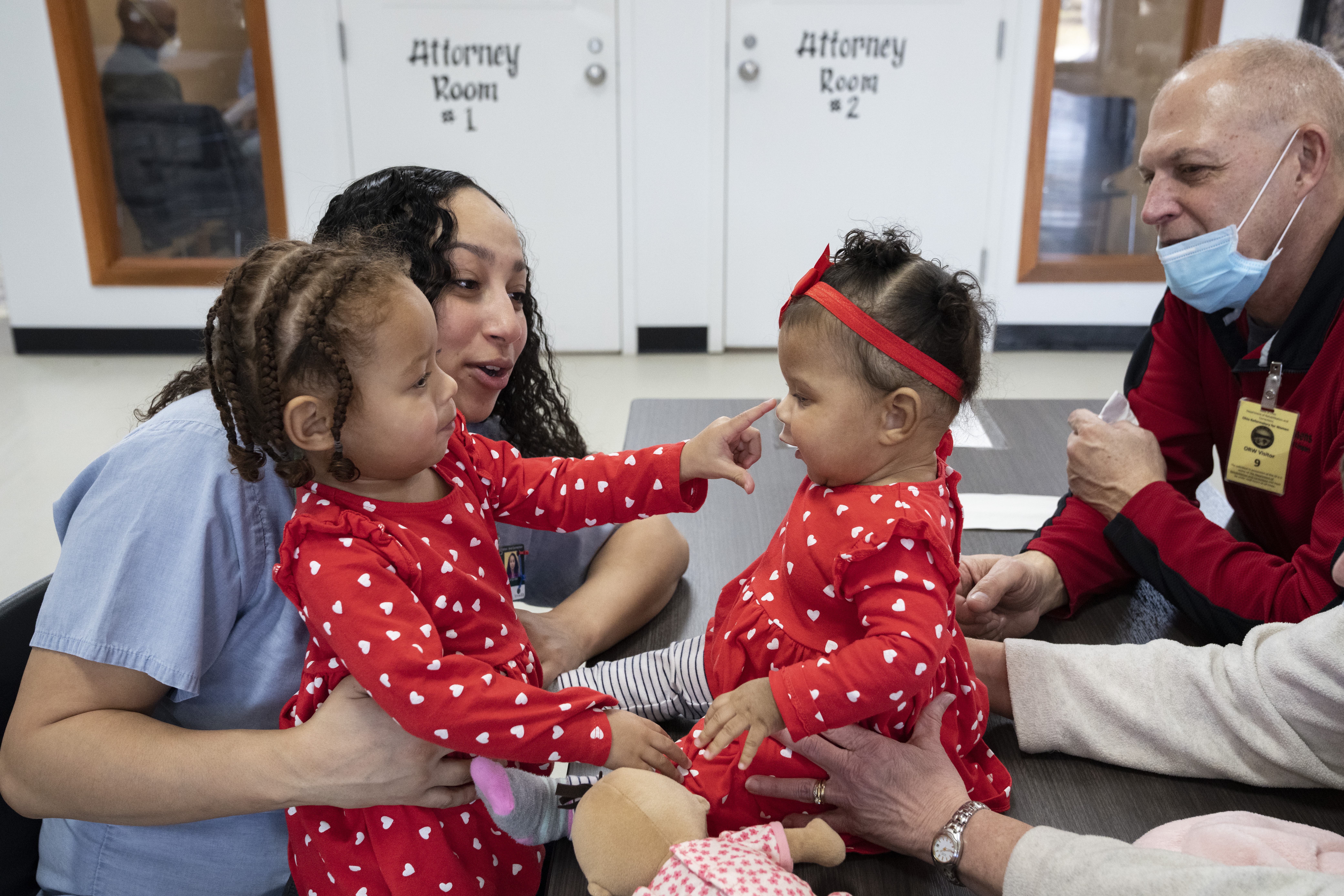 Abby Small holds her 2-year-old daughter Quam Judah while her father and mother Tom and Terri Small hold another of Small’s daughters, Gianna Judah, while the two children meet each other for the first time in their lives at the Ohio Reformatory for Women, in Marysville, Ohio, on Thursday, March 3, 2022.

Brodt’s sister Britney Basham made the trip from Kentucky, she said she was glad to meet the other women and babies in the program with her sister and nephew.

“He has these friends around him, these babies, they’re besties,” Basham said. “They are getting a little bit older and they’re sitting up and it’s making him want to sit up faster and they’re leading by example for him too. And she had other moms to lean on and I think that’s a real healthy thing.”

Basham was impressed by the maturity that her sister has gained during the program.

For Brodt, the program has allowed her to not only mature, but to find an appreciation for the small things in life. She said that upon her release she can’t wait to take her son to the park.

For further information about prison nurseries nationwide and the options that pregnant inmates have, please see the article previously published by the Ohio Valley Resource.