Suzanna Johnson is an education officer with the Heart of Phoenix Equine Rescue in Camner, Kentucky. Johnson is looking after a pregnant horse she rescued recently.

“Be good,” she instructs the mare, named CC, and pats her belly.

CC is an elderly horse that has been pregnant for 18 of her 21 years. Now she is chowing down on grass, recovering from what Johnson described as her previous owner’s negligent care. Before CC was rescued her teeth were in such poor condition she could not chew and digest her food, leaving her in state of starvation. 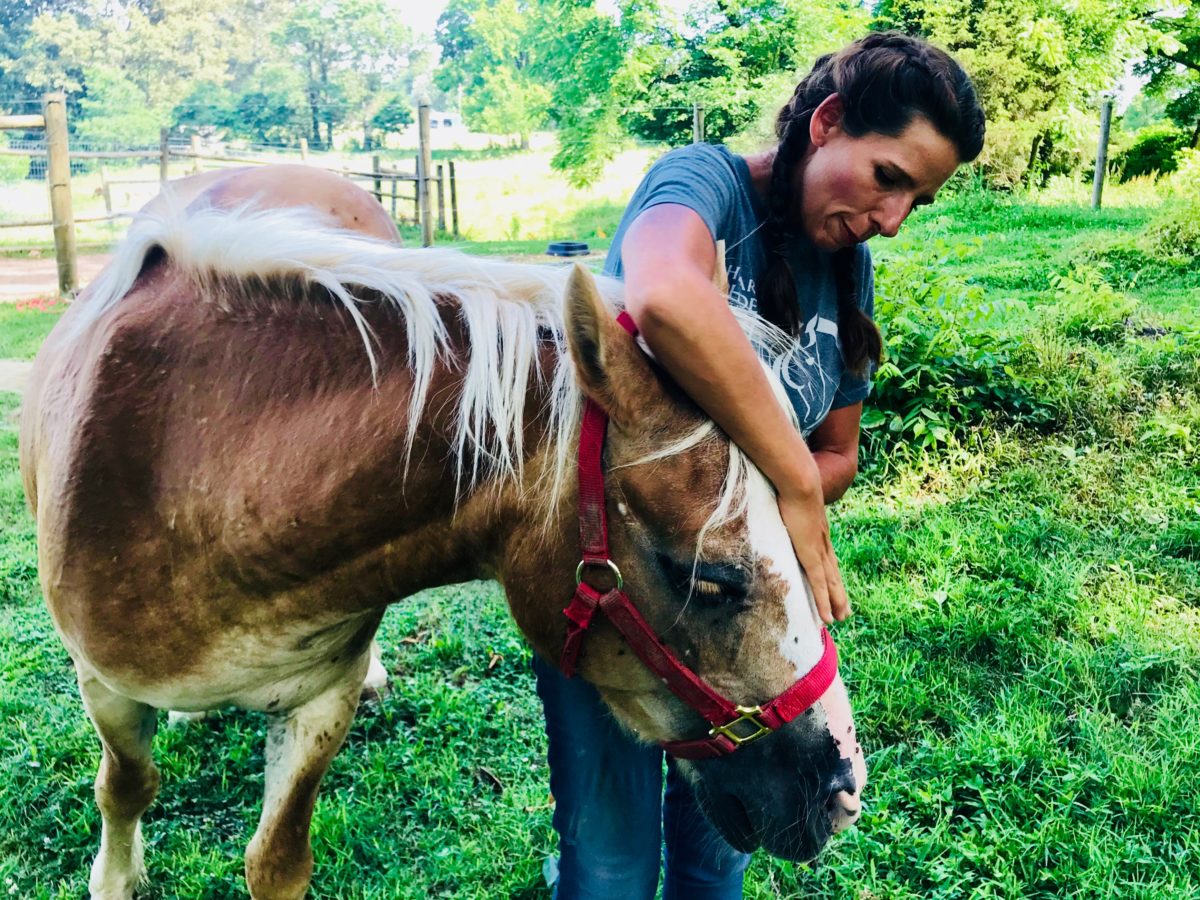 “You know some counties define good horse care as, the horse has food and water,” Johnson explained. “West Virginia defines it as the horse has what it needs to stay healthy.”

Johnson said that was an important distinction for CC.

“In CC’s case, yes she had food and water, but it wasn’t food that she could make use of because her teeth were in too bad of shape and the food was not appropriate for her age.”

Each year the Animal Legal Defense Fund ranks states on the quality of animal welfare legislation. Ohio is in the middle of the pack, ranking 27th, and West Virginia is among the nation’s best, ranking 7th. For the last 11 years Kentucky has ranked last.

“Kentucky animal welfare laws are horrible,” Johnson said, adding that what she’s seen during her work with the Heart of Phoenix in the Ohio Valley fits with the fund’s rankings. 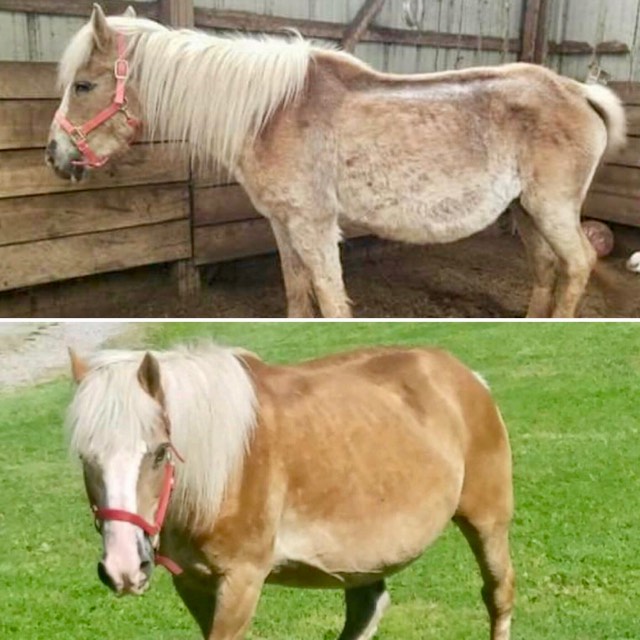 CC the horse before and after her rescue. The top image shows the horse’s malnourished condition.

According to the National Link Coalition, which brings together experts in domestic violence and abuse prevention, animal abuse issues can have broader implications. The Coalition reports that families under investigation for child abuse are highly likely to also have an incidence of animal abuse in the household.

Animal rights advocates say that the Ohio Valley’s varying laws on the treatment of animals can make it more difficult to identify those who abuse them, putting both pets and people at risk.

Veterinarians say Kentucky is the only state that prohibits them from reporting animal abuse to law enforcement. Kentucky Veterinary Medical Association’s Jim Weber said that ban came about as an accident.

Often veterinarians will have sensitive information about people in their records along with information about animals. For instance, Weber said, if a client has a health condition that could affect the animal’s treatment or mode of therapy, that may be recorded in the veterinary file.

“In domestic cases of course we have the client’s address, name and phone number listed and there have been instances where ex-spouses would try and find out where they were living through veterinarian records,” Weber said.

“We sponsored legislation that would make the records confidential,” Weber said. “Unfortunately, it was a case of unintended consequences, where we failed to have an exemption being able to report animal abuse.”

Weber said his group has tried for almost 10 years to change the statute to allow for reporting of animal abuse.

“The only two ways that a veterinarian can provide information about a patient or a client is by a court order or by consent of the owner of the animal,” he said.

Weber said groups like the Kentucky Farm Bureau have prevented the legislation from making it to the floor for a vote.

Kentucky Farm Bureau First Vice President Eddie Melton said in an email that “no segment of society has more concern for the well-being of livestock than the producer.”

Melton did not explain why the Farm Bureau would oppose efforts to remove the statute that prohibits veterinarians from reporting animal abuse.

In a March, 2017, report the Kentucky Center for Investigative Reporting found that in the Farm Bureau’s legislative report from 2016 the bureau stated that it had “worked with members of the General Assembly” to fight repeal of the provision.

“Animal abuse and domestic violence and child abuse go hand in hand,” according to Ozzie Gibson, President of the Kentucky Animal Control Advisory Board. He said the connection between the offenses is strong.

“They’ll start on the animal then they work their way to the kid, then the wife, or vice versa,” he said.

That’s why the FBI began tracking animal abuse cases in 2016. But Kentucky’s ban hinders the FBI’s ability to track those incidents.

“Increased participation in the collection of animal cruelty offenses will allow the FBI UCR [Uniform Crime Reporting] Program to provide additional information and trends on a national level,” FBI Spokesperson Steve Fischer said in an emailed statement. He said the FBI crime reporting system requires, at a minimum, five years of data until trends can be established.

“There’s going to be a class taught with Louisville Metro police officers next year in conjunction with our animal control officers on what to look for,” Gibson said.

A lack of funding and absence of state regulation leave many animal control offices without resources to train officers on important indicators of neglect or abuse. Gibson said free online training videos should be available later this year for the first time for Kentucky officers through the Kentucky Department of Agriculture.

This is where nonprofit groups such as Heart of Phoenix would also like to help by offering free horse care training to officers throughout the Ohio Valley.

“Just over a year ago I was thrown into becoming the humane officer for my county as well as the director of animal control,” Elizabeth Keough said. She is now Director of Animal Control in Harrison County, West Virginia. “I had never learned anything about horses or livestock because we didn’t deal with them as animal control.”

Keough was first introduced to the animal rescue when she was tasked with finding new homes for 30 abused horses. She said one of the most beneficial skills offered through her training with Heart of Phoenix was being taught how to recognize abuse.

“Horses are a little different because there are more factors that go into why a horse is skinny,” she said. “You know mostly with a dog, it is because they aren’t being fed or they have parasites.”

But with horses, neglect or abuse could take other forms, such as moldy hay, inappropriate feeding, or bad teeth.

“So understanding all of those factors has really helped me perform my job better,” she said. 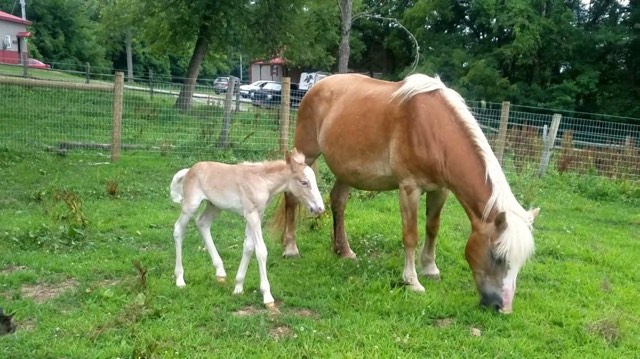 CC and her foal, both healthy in their new home.

Suzanna Johnson said if Kentucky and Ohio would support training accreditation like West Virginia has then animals like CC would have a better chance at recovery.

Johnson said that she remembered that when the veterinarian first saw CC in her neglected condition, she said it would “be a miracle if she and this baby live through the birth.”

Since our interview with Johnson, she was happy to report that CC gave birth to a healthy foal, named Suzy Q. Both have been adopted and found news homes.