A new report from the U.S. Senate Intelligence Committee about Russian interference in U.S. elections raises new questions about a struggling eastern Kentucky development project with ties to both Senator Mitch McConnell and the Russian government.

The 966-page document, the result of a years-long bipartisan investigation by the Senate Intelligence Committee, is the most explicit acknowledgement to date that Rusal, a Russian aluminum giant, was a proxy for the Russian government and that its head, oligarch and close Putin associate Oleg Deripaska, was involved in the country’s efforts to interfere in the 2016 election.

A section of the Intelligence Committee report on Rusal’s Kremlin connections.

According to the report, “Deripaska’s companies, including RUSAL, are proxies for the Kremlin, including for Russian government influence efforts, economic measures, and diplomatic relations.”

The report details Oleg Deripaska’s interference in elections in other countries.

The U.S. had placed sanctions against Rusal for its involvement in Russia’s annexation of Crimea. However, the Trump administration lifted those sanctions. A measure to keep the sanctions in place narrowly failed in the Senate last year. Just weeks later Rusal announced it would invest $200 million in an aluminum startup located in an economically struggling region of McConnell’s home state.

The startup, Braidy Industries, also received a $15 million investment from Kentucky taxpayers under the leadership of the former governor, Republican Matt Bevin. (The Louisville Courier Journal reported Braidy is unlikely to meet its funding obligations by the end of the year, which means Kentucky could buy back its stake in the firm.)

Prior to voting to permit the sanctions on Rusal to be lifted, McConnell spoke with lobbyists associated with the firm. 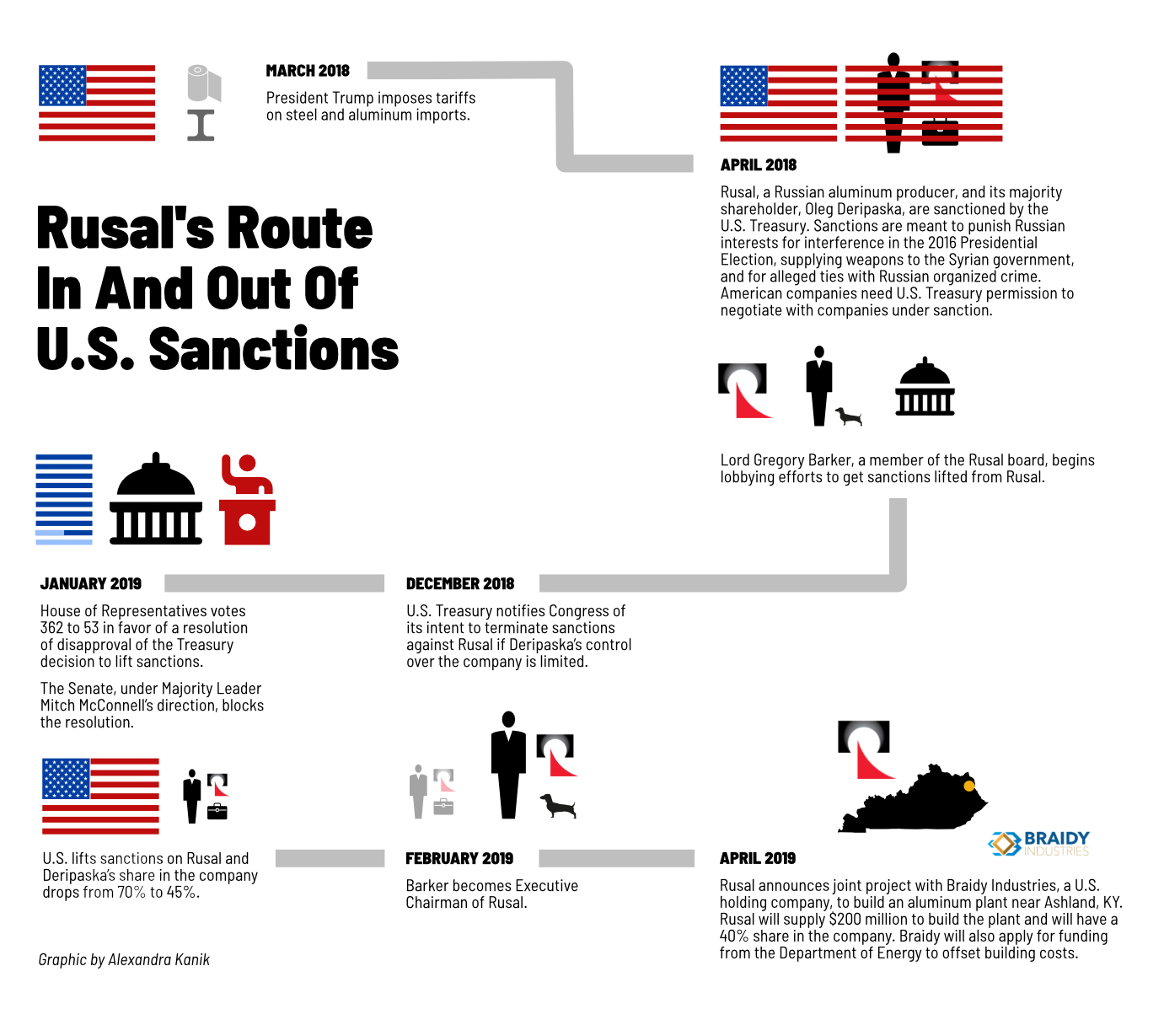 McConnell stood behind the new intelligence report at an appearance in Hazard, Kentucky this week, saying, “The Senate Intelligence Committee report is bipartisan, and pretty much free of the partisan instincts that are going on in Washington.”

The Courier Journal reported last year that the senator has said Rusal’s investment in Braidy’s mill did not impact his actions on the sanctions against the Russian company.

McConnell did not comment directly on the report’s characterization of Rusal.

A report from the Securities and Exchange Commission found that the firm had just $53.1 million cash on hand, and unless the project secured additional funding, it was at risk of shuttering by the end of 2020. Braidy Industries’ new CEO, Don Foster, maintains a positive attitude and says he expects the Ashland mill to be running within three years.

Note: This story has been updated to include a statement from Senator Mitch McConnell.