In a room at the Letcher County Health Department in Whitesburg, Kentucky, about 20 people are learning how to use naloxone, the opioid overdose reversal medication.

Among them is 18-year-old Morgan Hopkins. An aspiring therapist, Hopkins said she wants to be ready with naloxone if someone overdoses around her.

“You never know what you’re going to see,” she said. “If anything goes wrong, you have it, rather than you don’t have it.”

A total of 1,565 people died of fatal overdoses last year in Kentucky, up about 11 percent from 2016. And seven of those people were in rural Letcher County, according to data from the Kentucky Office of Drug Control Policy.

Hopkins and her mother are also tested for HIV and Hepatitis C at the same event. 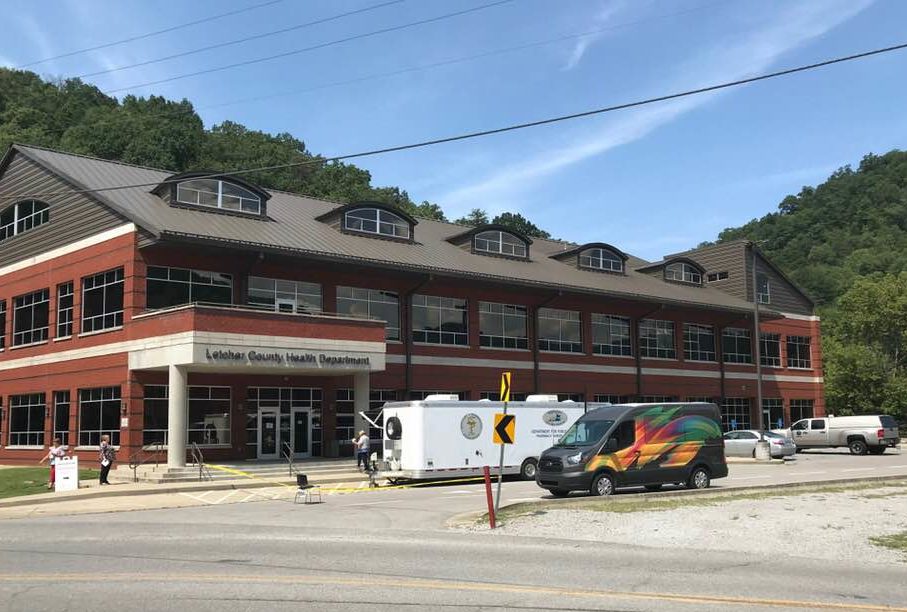 Mobile units for naloxone distribution and HIV/AIDS testing at the health department in Letcher County, KY.

“Especially with the Hepatitis going around and everything,” she said. “It’s really bad and it’s always good to keep up. It’s never anything to be ashamed of to come get testing done.”

As distressing as the rise in overdose deaths has been, it’s just one of many grim statistics associated with the opioid epidemic. Health officials say parts of the Ohio Valley are also at high risk for needle-borne disease. 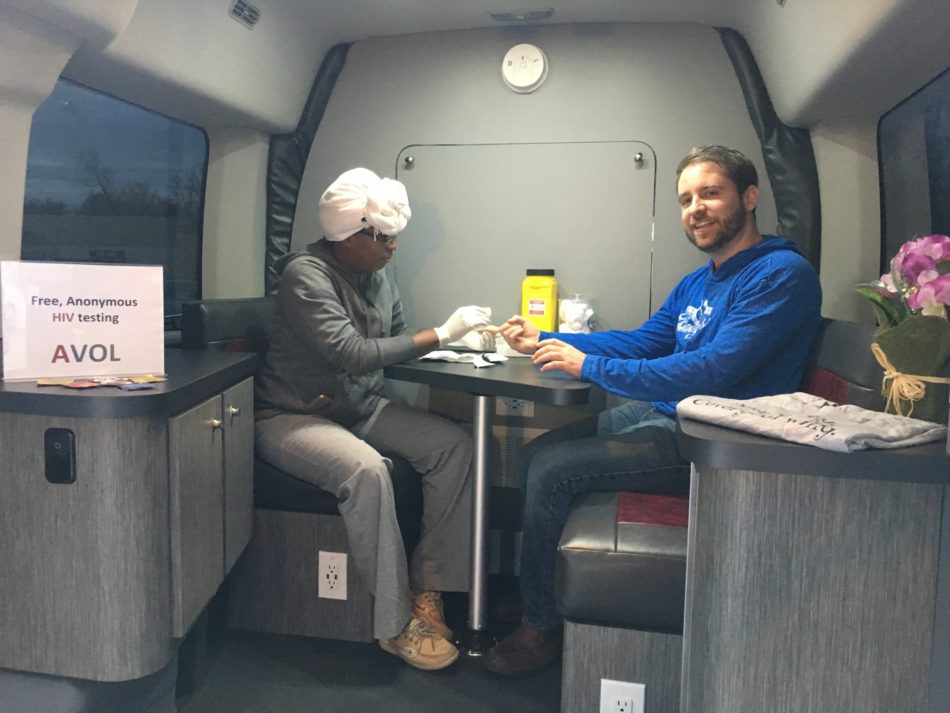 Jivonta Montgomery, a former employee, and Chris Cyr, a former volunteer, in the AVOL van.

Health officials say the region’s opioid epidemic is now a complex public health crisis and requires a coordinated response in all affected areas. So AVOL and other organizations around the Ohio Valley are teaming up and taking to the road to address the multifaceted challenge. 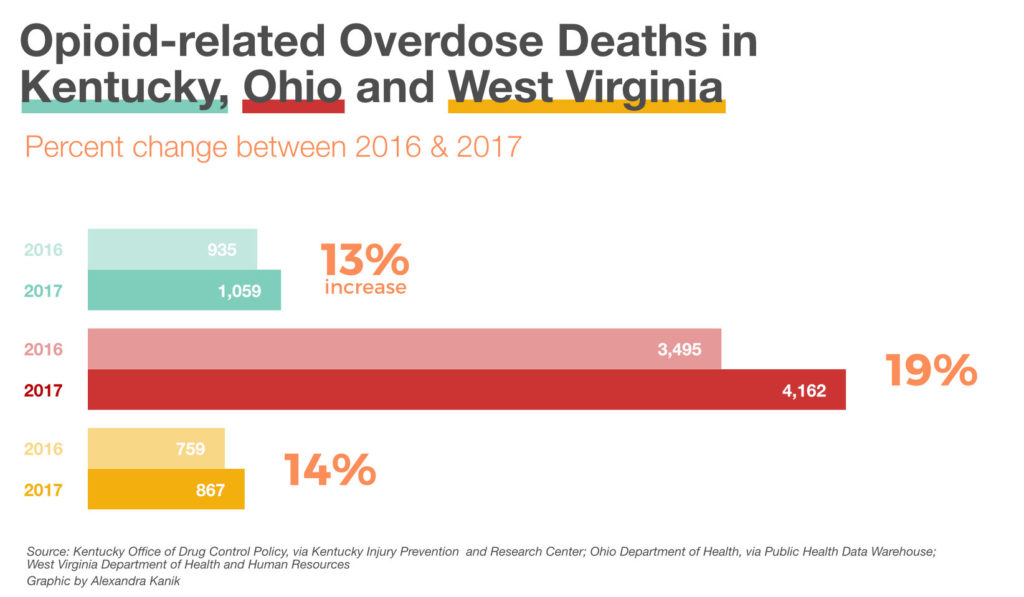 Kentucky’s mobile pharmacy unit distributed NARCAN, a nasal spray version of naloxone, to those who received the training at the Whitesburg event. 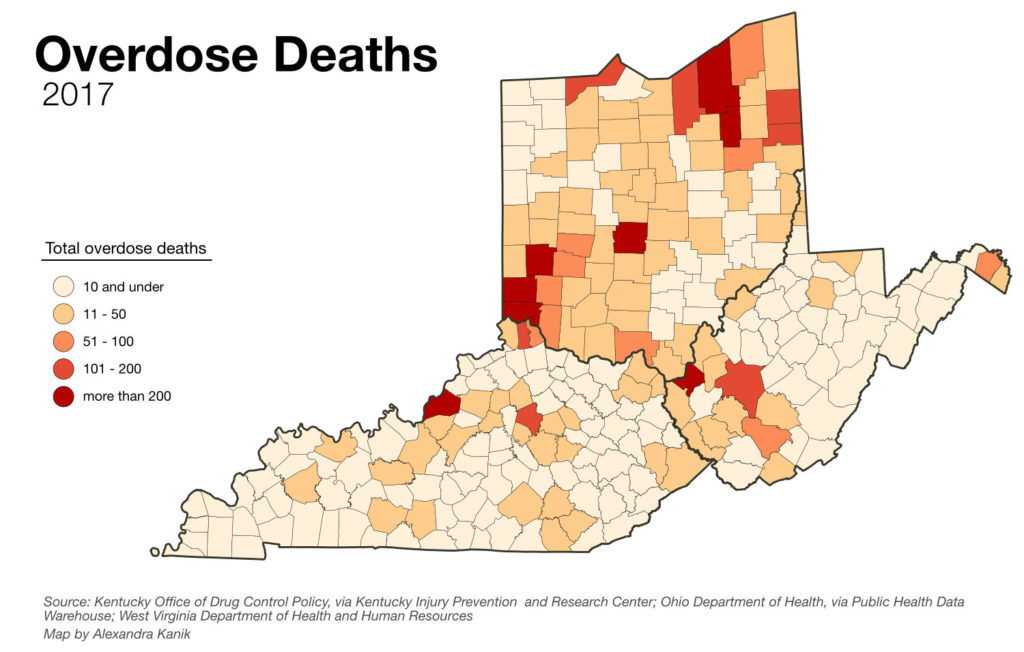 “For the public, this is almost tantamount to learning CPR if you want to be the kind of person that’s just ready to help another person in the community,” Jody Jaggers said. Jaggers is director of pharmacy emergency preparedness with the Kentucky Pharmacists Association.

His group worked in a partnership with the state Department for Public Health to create the mobile pharmacy in 2008 as a place to safely administer medication to displaced victims of Hurricane Gustav, which caused extensive flooding damage in the area. Public health preparedness funds from the Centers for Disease Control allowed them to purchase the trailer. 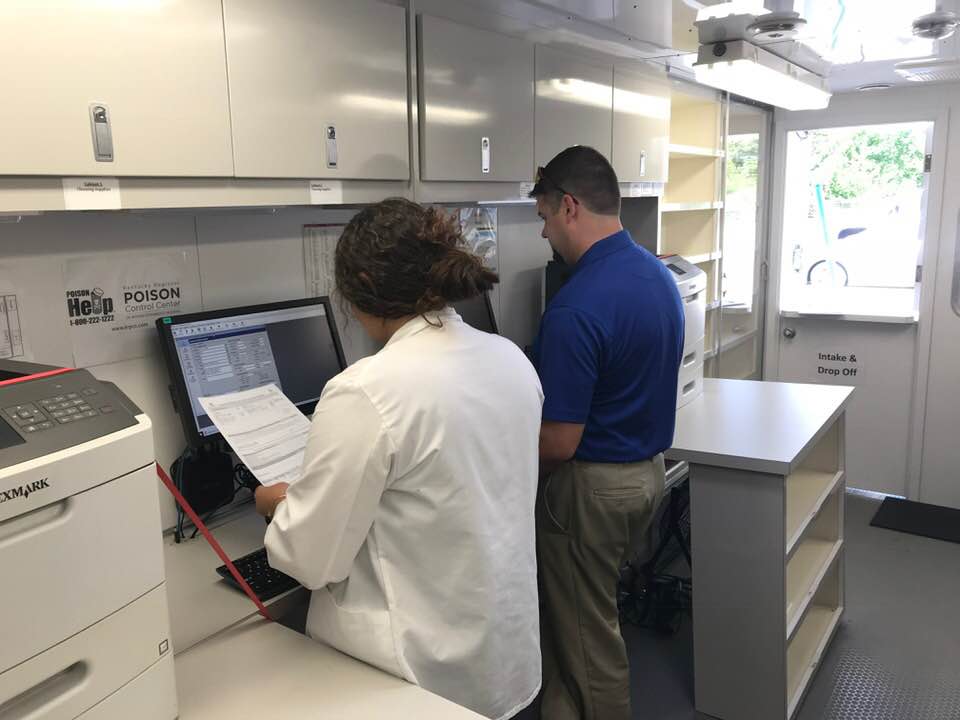 Inside the “NARCAN Van” distributing the anti-overdose drug.

When state legislatures in Kentucky, Ohio and West Virginia changed the way naloxone is regulated, the mobile unit became a way to get the life-saving drug into more remote regions.

“Part of what it did was it allowed pharmacists to be able to distribute and dispense Narcan to anyone who requested it via physician protocol,” Jaggers said.

The mobile unit is a fully licensed and operational pharmacy. The Whitesburg event was the 41st naloxone training where the van has been put to use since 2016, according to Jaggers.

Near the end of last year, the state Cabinet for Family Health Services estimated the mobile pharmacy had distributed about 1,300 doses of naloxone.

Another mobile clinic at the Whitesburg event works to give people access to resources addressing the bloodborne pathogens associated with needle use.

When CDC researchers looked for the country’s places most at risk for outbreaks of needle-borne diseases such as HIV and Hepatitis C, they found them in Kentucky, Ohio and West Virginia. A 2016 analysis found nearly a hundred counties in the Ohio Valley at high risk. 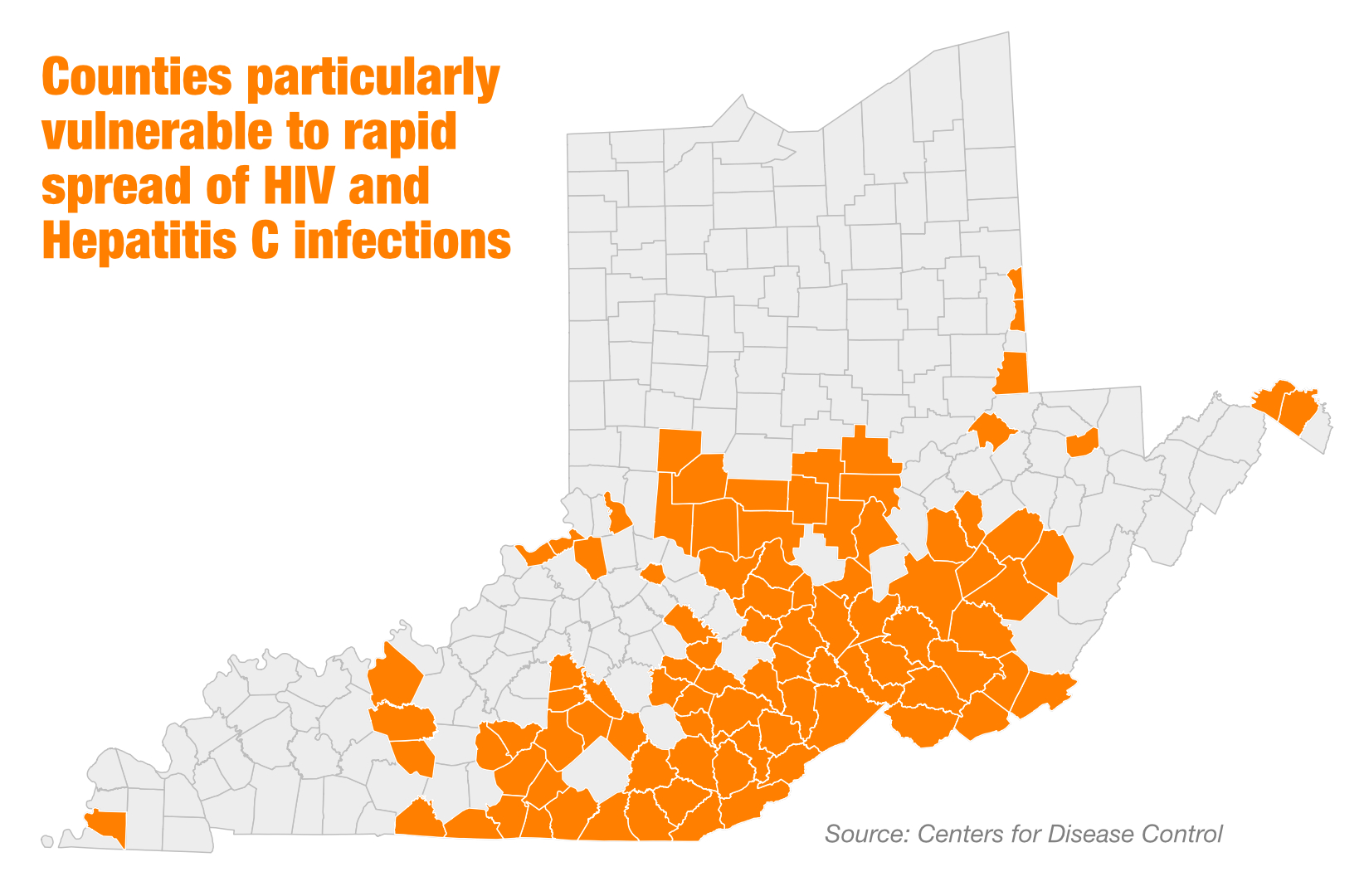 AVOL secured a $100,000 grant from the Elton John Foundation to purchase a mobile testing van to take their services to rural areas outside of Lexington.

Foundation Executive Director Scott Campbell said the foundation met with health departments in Kentucky and West Virginia to see how to best support the region’s fight against the spread of HIV.

Since 2016, AVOL and medical centers in Charleston have received support. Director of Grants Matt Blinstrubas said he toured the region and saw the need, especially in rural areas throughout Appalachia.

“We are trying to connect the dots on a grand scale,” he said of the intersection of the opioid epidemic and HIV. 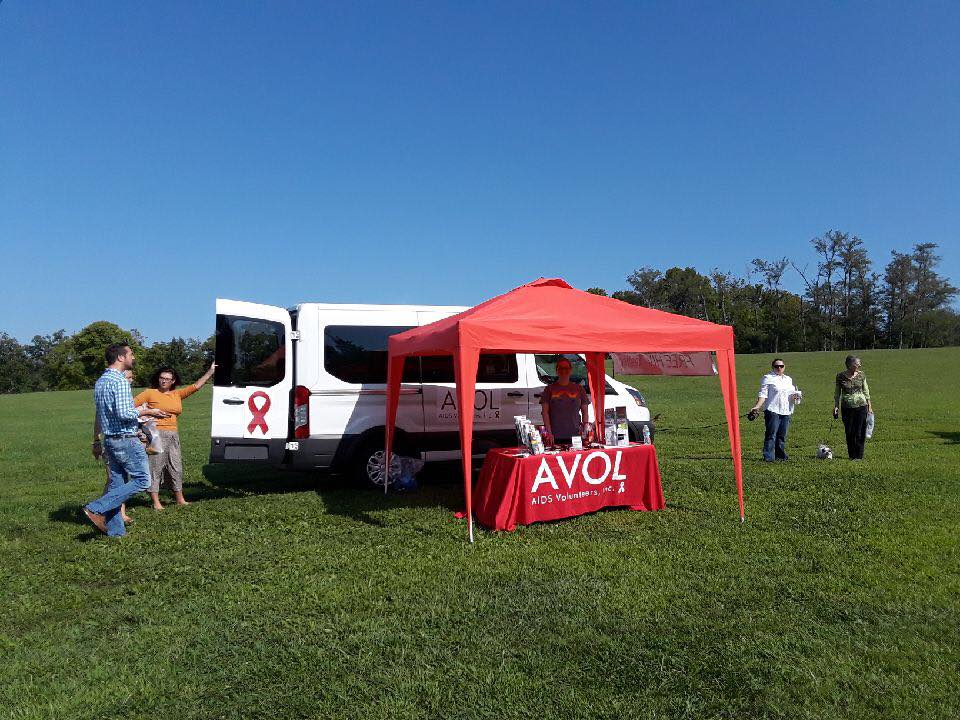 AVOL volunteers setting up to spread the word about HIV testing.

Campbell said he and his colleagues feel a sense of urgency.

“We don’t need another outbreak to spur action.”

With the van, AVOL can reach high-risk people who may not have the means to travel out of their hometowns to get HIV and Hepatitis screenings.

“We meet people exactly where they’re at,” Brewer said. “Whether they are currently using, or someone who engages in sex work, we help them kind of tailor a harm reduction plan. It’s like ‘If you’re going to do this, this is the safest way to do it.’”

Getting to people in rural areas is a challenge not just because of distance. The organization has to work around people’s fear of being associated with AIDS. 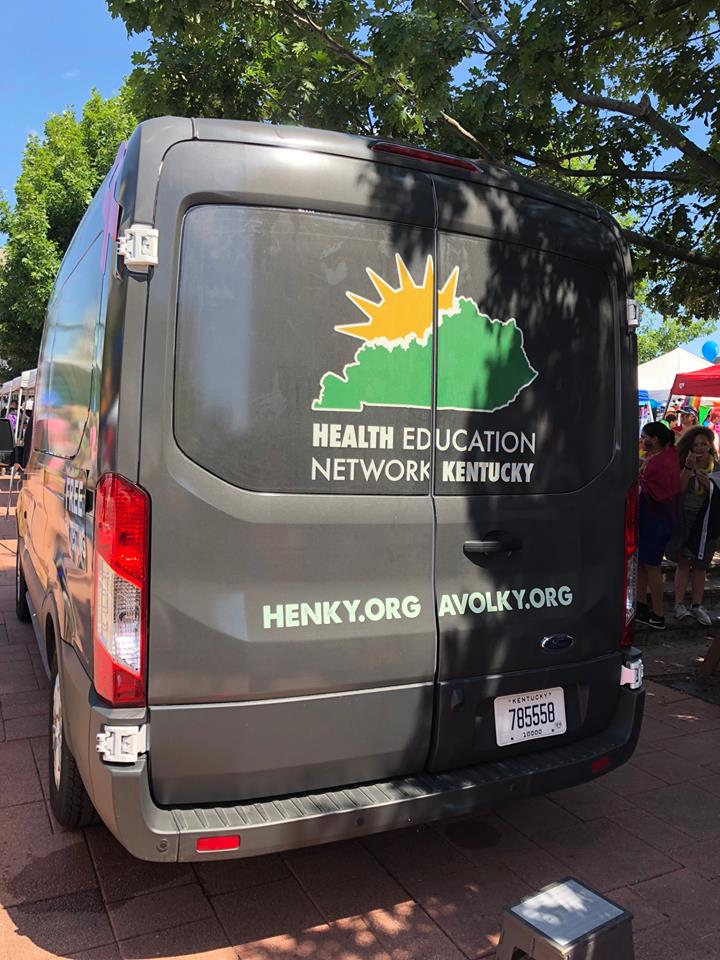 “There’s so much stigma left over from the early epidemic,” Brewer said. The group sometimes operates under a different name in rural areas. “When we’re in eastern Kentucky, we’re the ‘Health Education Network of Kentucky.’”

They’ll offer needle-cleaning kits, Hepatitis C screenings, and will refer people for other health services in their area.

“When you present it as a whole, you’re received well,” Brewer said. “When you’re just AIDS Volunteers, Inc., people aren’t quite as receptive to that.”

The clinic on wheels is a necessary asset in an uphill fight against needle-borne disease in rural Kentucky.

The region is also fighting a Hepatitis A outbreak that is hitting especially hard among drug users, people who are homeless, and men who have sex with men.

The AVOL Van, the emergency pharmacy, and the other organizations involved in the Whitesburg event created a one-stop shop for those wanting to tackle the opioid crisis in their community.

If recent statistics are any indication, those services will be in even greater demand.