The VA Fired A Doctor For ‘Egregious’ Misconduct. The Bevin Administration Hired Him.

The VA’s IG report found that between Oct. 1, 2015, and Dec. 27, 2017, Bennett repeatedly entered the same blood pressure reading of 128/78 in order to bypass a clinical alert system. The alert required the doctor to enter additional information that involved follow-up work with the patients, such as blood tests and changes in medication. The inaccurate blood pressure records, according to the report, were “most likely an effort to reduce workload.”

The IG found that Bennett falsified blood pressure readings in 99.5 percent of 1,370 cases involving patients at highest risk for developing health problems due to hypertension.

When confronted at the time, Bennett acknowledged the seriousness of the situation.

According to a document obtained from an open records request to the Kentucky Board of Medical Licensure, Bennett told Dr. Mark Swisher, the VA Chief of Primary Care, that he thought he could be fired, lose his medical license, or go to prison.

VA consultant Dr. Thomas Wong discussed the incident in a podcast produced by the IG’s office. Wong said that several patients had adverse health outcomes because of the inaccurate information in their medical charts. One patient suffered an acute cardiac event.

“Patients trust that ethical practice occurs throughout the patient-provider relationship. If this trust is broken, that relationship is eroded and is potentially irreversible,” he said.

The Kentucky Board of Medical Licensure later issued an Agreed Order outlining Bennett’s conduct and sanctions. In that document, Lexington, Kentucky, VA Medical Center Director Emma Metcalf was blunt in her assessment of Bennett’s behavior.

Bennett’s offenses, she wrote, are “egregious, directly related to your duties, intentional and frequently repeated.

“You have lost the confidence of your colleagues regarding your reliability, accuracy, and integrity,” she wrote. “You have violated your patients’ and colleagues’ trust as well as failed to meet the standards entrusted to us as physicians. Your actions have placed Veterans in harm’s way and violate the established principles governing the practice of medicine.”

The VA suspended Bennett’s privileges – meaning he was barred from treating patients – on Dec. 26, 2017, when the investigation began. The VA fired him on July 6, 2018, and the VA’s  Metcalf sent a letter to the Kentucky Board of Medical Licensure two weeks later explaining the VA decision.

In the letter, obtained through an open records request, Metcalf wrote “there is substantial evidence that John Bennett, MD so significantly failed to meet generally-accepted standards of clinical practice so as to raise reasonable concern for the safety of patients.” 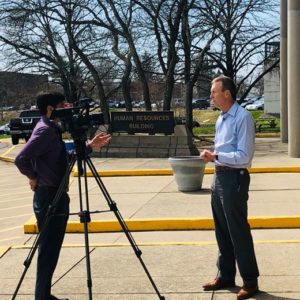 Dr. John “Mel” Bennett in an interview during his tenure at the KY Cabinet for Health and Family Services.

Despite this available information, Kentucky’s Cabinet for Health and Family Services hired Bennett in September, 2018, to lead the state’s infectious disease branch at a salary of $127,000.

A spokesperson for the Health and Family Services Cabinet declined a request for an interview.

Instead, spokesperson Christina Dettman wrote in an email that “Dr. Bennett has a Master’s in Public Health, an M.D., as well as time serving on a Board of Public Health, making him fully qualified to be hired for the position.”

Dettman also wrote that the VA published its report after Bennett was hired and that “the findings did not identify Dr. Bennett as the physician under investigation.”

Dr. Jeffrey Howard, who approved Bennett’s hire, was public health commissioner at the time and was on the licensure board, which received the VA’s letter in July.

However, board rules require such information to remain confidential for some time until an investigation is complete. In a second email sent after this story was originally published, Cabinet spokesperson Dettman pointed out that due to the licensure board’s procedural timeline, Howard would not have been notified of the VA letter at the time of Bennett’s hire.

“The Cabinet for Health and Family Services had no way of knowing Dr. Bennett’s conduct was in question when he was hired by the Cabinet, nor at any point during his tenure with the Cabinet through the time he was terminated,” she wrote.

Howard is currently a White House Fellow working in Washington, D.C.. Reached by telephone, he declined to comment for this story.

Bennett remained in charge of the infectious disease office for six months until his removal in April. His tenure covered an especially critical period for public health in Kentucky. The state faced the country’s worst ongoing outbreak of hepatitis A.

According to the Centers for Disease Control and Prevention, about 4,900 Kentuckians have been diagnosed with hep A, half of those have been hospitalized, and 61 people have died. The state’s efforts in combating the disease have been criticized by Bennett’s predecessor, Dr. Robert Brawley, as being too slow and underfunded.

Bennett’s resume shows a long history of work as a family physician, going back to his early days as a member of the U. S. Army Medical Corps from 1989-1994.

According to the resume included in his state application, Bennett is a certified fellow in the American Academy Of Family Physicians. That resume also states Bennett was still employed by the VA at the time he applied for the state position, even though he had been fired in July.

Bennett said in an interview  that he was unaware of entering the same blood pressure over and over but also that it was a treatment strategy.

“I thought I had an ability to, to sub categorize my patients into a group that I can work with at a later date. It was wrong,” he said.

Bennett gave a similar explanation to both the VA and the licensure board. Both rejected his arguments.

In June, the state licensure board placed Bennett’s license on probation for five years. The board also ordered Bennett to complete mandated training and pay a $5,000 fine.

Correction: This story originally indicated that Dr. Jeffrey Howard would have had access to the VA’s July, 2018, letter to the licensure board regarding Dr. Bennett’s misconduct. This story was updated on Sept. 25, 2019, to include information about the licensure board’s process, which kept that letter confidential until completion of an investigation.

This week ‘In Conversation’: Athletes and activism

What’s next for progressive candidates in Louisville